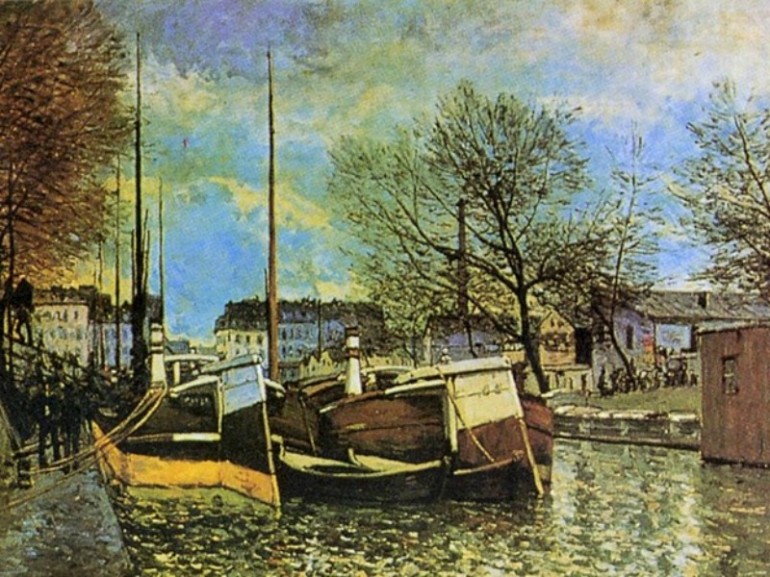 Alfred Sisley, who was born in Paris on October 30, 1839, had affluent parents. His father was in the silk business. At the age of 18 he was sent to London to get a degree in business. Although he stayed in school for four years, he abandoned his studies and went back home. He enrolled at the Paris École des Beaux-Arts in the studio of Marc-Charles-Gabriel Gleyre, a Swiss artist. There Sisley came to know Pierre-Auguste Renoir, Claude Monet and Frédéric Bazille. They went out to paint landscapes en plein air so they could capture the sunlight’s transient effects. Their approach to painting was considered innovative at that time, for it resulted in more colorful and broadly painted works that were new to the eyes of the viewing public.

Of course during that time, academic art was highly favored by the influential Paris Salon jury. Thereby Sisley and his group of Impressionist painters had limited opportunities to exhibit and sell their paintings, as the Salon jury continue to reject their work. It was good though that Sisley had an allowance from his father, so for a time he was not one of the many starving artists.

Acceptance of his Work

It was only in 1868, when he was already 31 when his paintings were accepted by the Paris Salon. However, his first exhibition was not a critical or financial success. The failure continued during his other exhibitions at the Salon.

His father’s business went down during the Franco-Prussian War in 1870 and his allowance was cut off. His only means of support came from the sale of his paintings. Although he produced plenty of work, he lived in poverty for the remainder of his life as his works did not increase in monetary value. Occasional backing from patrons allowed his to take short trips to England.

His first trip to England was in 1874 and he spent a few months in London. During his stay, he created close to twenty paintings of the Upper Thames. This group of paintings was later described as a “perfect moment of Impressionism” by art historian Kenneth Clark.

In 1880 Sisley and his family moved to Moret-sur-Loing, a small village near the Fontainebleau forest, an area that was a favorite of painters of the Barbizon school. According to art historian Anne Poulet, the area, with its gentle landscapes and continuously changing atmosphere suited the talents of Alfred Sisley. Most of his works depicted calm, serene and beautiful surroundings.

On his third trip to Britain in 1897, Sisley finally married his long-time partner, Eugénie Lesouezec, whom he met in 1866. While staying in Penarth, Sisley finished about six oil paintings of the cliffs and the sea and about 11 paintings of the areas around Rotherslade Bay and Langland Bay when they moved to a hotel in the Gower Peninsula. 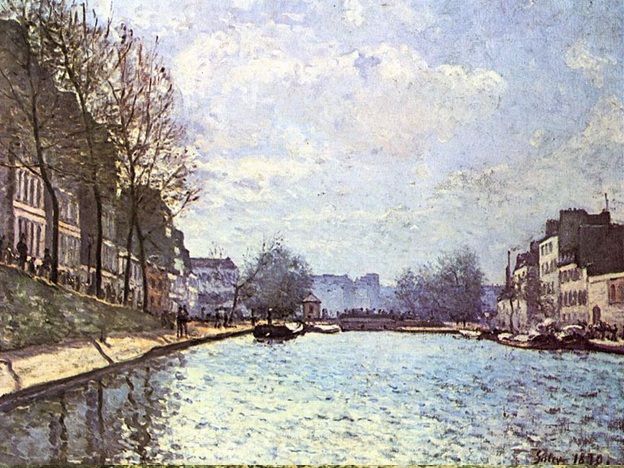 Although he was a founding member of Impressionism, Alfred Sisley was often ignored, for he did not have the drama and flashiness of Renoir or Monet. He was more like the other genius Impressionist painters such as Gustav Caillebotte. Compared to the star of Impressionism, Monet, Sisley’s canvases were considered anemic because his colors were subdued, preferring to use the natural harmony of color and light.

His style was very much influenced by his Impressionist colleagues but Sisley considered himself a student of Courbet, Constable and Corot. Like many of the Impressionist painters, Alfred Sisley was also fascinated by the effects of light and shadow and preferred to work outdoors to paint rather than inside a studio. Among the other Impressionist, Sisley loved painting the water. All his canvases were divided into sky, earth and water. His paintings, except for the early ones, were all bright and airy, colorful in a subdued way that makes his works contemplative and quiet.

He left behind about 900 oil paintings, about 100 pastels and various drawings. His student works were lost.