Known for her avant-garde conceptual art, Barbara Kruger sheds light on issues affecting women with images made more powerful with the use of words that have become one of her many signatures in the postmodern art world. Barbara Kruger studied art and design in New York at Syracuse University and then later on at Parsons School of Design where she took more advanced classes to hone her artistic skills. Before developing her art practice, her focus was with photography, sewing, painting. It was her years teaching in various institutions, that she developed a penchant with words and poetry. She then stopped painting and began experimenting combining words with photographs. The publication of her book “Pictures/Readings” which features architectural photographs juxtaposed with words was one of her first ventures in putting together images and text. 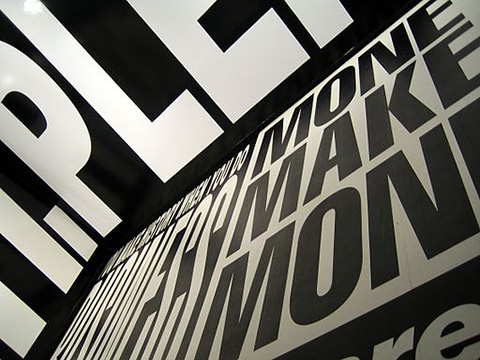 In exploring how mass media distortedly presents women, influences social relationships, and negatively steers political issues, Kruger did away with original photography and instead exploited “found images” from mass media and advertising. “Found images” are photographs she appropriated from mass communication publications such as newspapers and magazines. Appropriating consumerist imagery was first done through pop-art but Kruger was the first to use it for addressing feminism in particular. She then uses them as the background which she embellishes with big and bold texts conveying confrontational phrases. The blocks of text she emblazons over the images are in different variations of the fonts Futura and Helvetica but all still present the same legible and condensed typeface.

The short declarative statements constructed as slogans, questions, and aphorisms in Kruger’s works are described as witty and typically tongue-in-cheek satire that facilitate direct communication with the audience. Not going after profitability, Kruger’s intention with the way she practices and produces art is to incite critical thinking and careful reconsideration of one’s milieu and societal constructs.

Kruger is also known for creating large-scale video and audio art installations displayed in a strategic manner. By refining and enhancing her word art, she extended her campaign of increasing gender and identity awareness in a more interactive way with her images now having voice and movement. She also displays fiberglass sculptures along with her other forms of art in various modern art museums.

Throughout her career in art, Barbara Kruger has maintained social, cultural, and political critique in the themes and messages of her works. Feminist issues that question society’s notions and stereotypes pertaining to gender roles, sexuality, and the portrayal of women have become her thematic focal point. Her Untitled (1989) photographic silkscreen on vinyl piece that features a woman’s face split in negative and positive exposures overlaid with the slogan “Your body is a battleground” criticizes how mass media and advertising objectifies the standard of symmetry applied to feminine beauty. Aside from feminism, Kruger also strongly addresses mature themes such as power, sex, personal identity, personal freedom, and consumerism.

With her conceptual art and love for language and words, Barbara Kruger remains one of the largest contributors to feminist art.