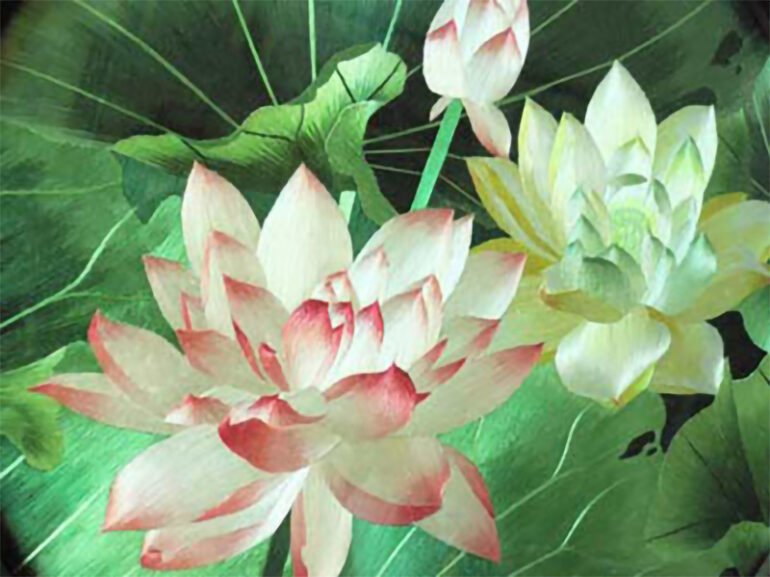 Traditional Chinese art and craft are revered worldwide since ancient times. The country has maintained most of its classic art and gave them a slightly modern touch, but you can still discern the glimmer of intricate and delicate craftsmanship.

One art form where the Chinese artisans excel at is embroidery, often on silk cloth. Su or Suzhou embroidery is the world’s oldest embroidery technique, as it can trace its history about 2,000 years back. Suzhou embroidery was among the first embroidery styles that China developed, which many specialized Chinese embroiderers still practice to this day. Themes typically focus on an object, animal, person, or pastoral scene. The embroidery work is distinct with its uncluttered and well-proportioned look and the clever use of brightly colored silk, which shows the intricacy and detail that characterize Su embroidery.

“Su” is short for Suzhou, a city west of Shanghai in Jiangsu province, and is known for its silk trade and classical gardens.

Suzhou embroidery is one of the four embroidery styles in China. In addition, Hunan has the Xiang style, while Guandong has the Yue style, and Sichuan is known for the Shu embroidery style. Of these styles, Su embroidery is distinct for its stitching techniques, the breadth of themes, and the use of split silk threads.

With even embroidery or delicate embroidery, the focus is on uniformity and preventing threads from overlapping. The neat stitch or qizhen is the primary technique embroiderers use. The stitching shows smooth lines of the same length, either in diagonal, horizontal, or vertical stitches.

Even stitch is also used in the gradient stitch or qiangzhen, where the stitches are even in length, often used for butterflies and flowers. On the other hand, the layer stitch (taozhen) is for highly detailed bird feathers, animal tails, and highly detailed petals.

The other prominent stitching techniques include prodding stitch (souhezhen) and thickening stitch (shizhen). They also created a new embroidery style called random embroidery, which was developed in the 1930s.

Many records of embroidered items produced in Suzhou showing intricate details date back to 200 BC. Maps made of embroidered silk were available in the area during the second and third centuries AD. But the Suzhou style of embroidery became prominent during the Song Dynasty. Using finely spun silk threads, the Suzhou embroiderers showed their skills and creativity by embroidering images that rivaled nature in their colors and details. During that period, having a Suzhou embroidery piece in the home is a sign of elegance and style. Embroidery spread to different provinces, and many worked using the Suzhou style. Other embroidery techniques were developed over time, but the Suzhou method remained the standard.

One of the essential characteristics of Su embroidery is the use of threads in various thicknesses. A Su embroidered usually splits each silk strand into halves, quarters, eighths, sixteenths, etc. Thus, the embroiderer can have threads of different thicknesses when they produce other subjects. Today, some embroiderers use threads made from different materials, including gold, cotton, and rayon, to achieve the result they envision.

Suzhou embroidery is distinct for its exceptionally detailed presentation of any subject. Su embroiderers are also known for their technique of creating double-side embroidery pieces. They either make a single subject, which can be seen on either side of the silk fabric. If you think this type of double-sided embroidery is fantastic, you should know that the Su embroiderers also developed another technique. They can embroider two different subjects on a single piece of silk fabric. This incredible technique is a masterpiece of artistry and skills. Just imagine, you can see a tiger on one side and a peacock on the other side, each image not showing on the reverse side. And get this, the Su embroiderers developed the technique to hide the knots. Therefore, the realistic presentation is immaculate.

In double-sided embroidery, some of the silk threads are so finely divided that they are almost invisible. This is because embroiderers repeat the stitches so densely in some parts of the object.

In China, embroidery is not a dying art form. Instead, proponents are making efforts to save the tradition and finding ways to expand the technique and use it for different applications.