One of the greatest architects in history, Donato Bramante is recognized as an expert architect during the Italian Renaissance era and the founder of the architectural style of the High Renaissance era. He’s mostly credited as the restorer of the principles of ancient architecture. He’s an architect, who re-designed St. Peter’s Basilica and advocates the Cinquecento Renaissance architecture, as well as an artist, who loved fine art. His works include the church of Santa Maria delle Grazie, the rectory of Sant’Ambrogio, Belvedere court in the Vatican, and the Tempietto at San Pietro in Montorio.

His Time in Urbino

Much of his early life remains a mystery: He was born in 1444, probably at Monte Asdrualdo, Italy, to a middle-class farming family. Many speculate that he received his training in Urbino, which was under the leadership of Federico da Montefeltro at the time, and might have met in life other great architects, like Piero della Francesca (to whom, people speculate, he has served as Francesca’s assistant), Vitruvius, and Leon Battista Alberti. One of his first works as a painter was a facade painting of the Palazzo del Podesta and it was said that, through this work, he already exhibited an interest in architecture and perspective illusion.

As far as anyone knows, none of his works when he was younger has survived. Most of the works attributed to him today are purely speculatory, with experts saying that this or that has shown characteristics of being a work by Bramante. But since he’s a known figure during the Renaissance, the idea that people copied his style, or learned his style isn’t too far off. A speculation exists that Bramante may have been a planner and a designer of the architectural perspectives whom artists and architects based their works on. There are differences between the attributed works, so many are still skeptical about works that attributed to him.

He eventually left Umbino and went to Lombardy around 1477. The reasons are unknown but while there he started working on a number of projects, most notably the Palazzo del Podestà frescoes. During the time Milan was a large and wealthy city (by their era’s standards). Located in Milan is the cathedral workshop, which is a cultural center where people would gather knowledge from all over Europe. Milan is also a city that values Renaissance architecture, which was fashionable during their time, and Bramante feels like he’d be able to grow here.

The works of Leonardo, his architectural drawings, as well as the works of the other people and architects he met in Urbano had an impact in Bramante’s designs. When Bramante designed his first church, the Santa Maria presso San Satiro, people say it has traces of Alberti‘s work in it. This was in 1482. By 1488 he’s already a well-known architect. He was consulted, along with Francesco di Giorgio and Leonardo, about the plans to rebuild the Duomo at Pavia. In just six years he worked hard to obtain recognition equal to that given to those who once influenced his works. Among his works in Milan were the tribune at S.Maria delle Grazie and the Corinthian loggia of the Canonica. He also worked on public structures, such as Vigevano’s central piazza in 1492.

Rome And His Final Years at the Vatican 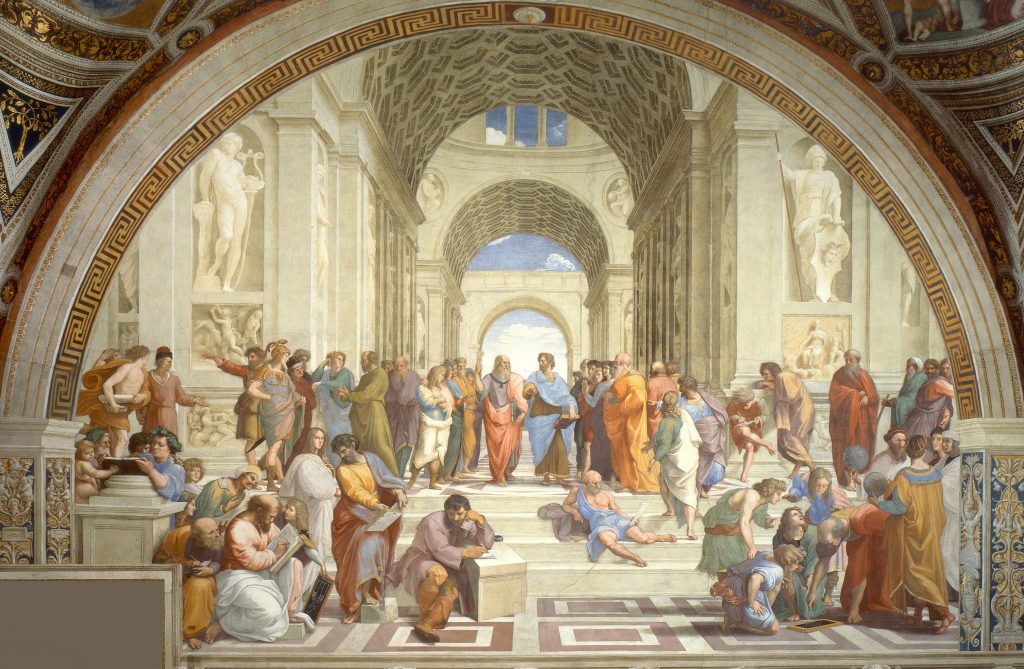 Bramante left Milan during the French occupation of 1499 and went to Rome instead. It was there that he received employment from Pope Julius II with the plans to renew Rome, including the replacement of the old St Peter’s Basilica with a new one, the current St Peter’s Basilica. He became the pope’s principal architect, busy with the new Basilica, but even then he would still work on small-scale projects, such as the marine fortress at Civitavecchia, the church of Roccaverano, and the Palazzo Caprini. He apparently also designed the background for Raphael’s School of Athens in 1509.

In 1508 he continued his work as architect and city planner for the renewal of Rome. By Julius II’s death Bramante is seen as an important person, held even in high regard by the new pope, Pope Leo X. He eventually died in 1514, after much work the year before, rumors say, on a water-control plan to prevent floods caused by the Tiber river, and was buried in St Peter’s.

2nd image School of Athens by Raphael, background based on Bramante’s design via Wikipedia