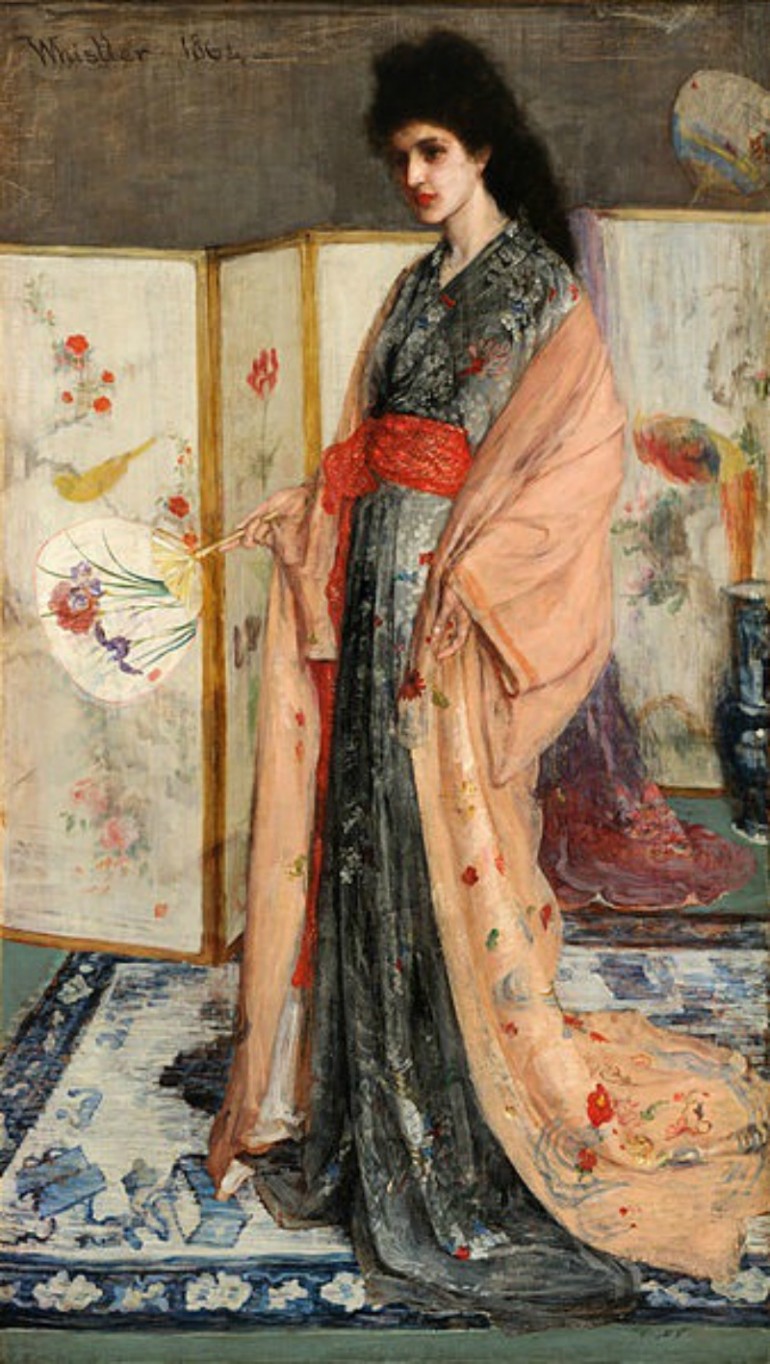 Japonism or Japanisme in French, was a European craze late in the 19th century for Japanese art – anything from Japan such as porcelains, silks, bronzes, lacquers, screens and fans were very much favored. For most collectors and the Impressionist painters, the Ukiyo-e woodblock prints made a huge influence. The various materials from Japan came to the west in huge quantities due to the decision of the Tokugawa Shogunate in 1854 to open up the Japanese seaports to international trade.

The term was coined in 1872 by Jules Claretie, an art critic and appeared in his book, L’Art Francais. The term was also used to describe a particular style of decorative arts in France that were made in the Japanese style. Japonism was associated with the colorful and cheap woodcuts from the Edo period, called Ukiyo-e prints. They were created by masters such as Hokusai and Hiroshige in the 18th century and by Toyoharu, Toyokuni, Kunisada, Keisai Eisen and Kuniyoshi, from mid-18th century up to about late mid-19th century in Japan.

The traditional method of Japanese printmaking had a significant influence in modern art in Western Europe. It became one source of inspiration for several art styles including Impressionism in the 1870s and 1880s, Post-Impressionism in the 1880s up to the 1890s and Art Nouveau from about 1890 until 1914. The demand for the prints were so great that an art dealer in Paris, Tadamasa Hayashi sold more than 150,000 Ukiyo-e prints from 1890 to 1901.

The demand for Japanese art was not new. The interest in Western Europe started around 1700. Reproductions of the Japanese blue and white porcelain were done in several factories, particularly in Chantilly in France and Meissen in Germany. The interest extended to Japanese lacquer and ceramic art.

Specialist collectors were importing yamato-e, the highly refined classical Japanese painting created during the Kamakura and Muromachi Shogunates and the early part of the Tokugawa Shogunate.

Several fairs held through the years exposed Japanese art to a wider audience. The first and most important one was at the 1862 International Exhibition in London. In 1867, Japanese art was also a feature of the World Fair or the Exposition Universelle in Paris. Another World Fair in Paris in 1878 showcased new Japanese artworks, with the support of the Meiji Emperor.

The defining characteristic of Ukiyo-e prints was the distinct, bold, flat line. When it first became available, the prints were monochromatic. It was only later that color was introduced. Composition in Ukiyo-e placed forms in flat spaces with figures positioned in a single plane of depth, with attention to the vertical and horizontal relationships drawn by details such as patterns, shapes and lines. Viewpoints can be from unusual angles and some of the elements of the images gave the prints a spontaneous feel due to cropping.  Linework sharply defined the unshaded, boldly colored areas. 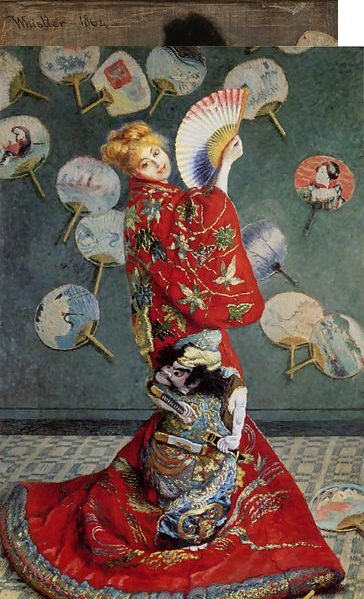 In the early 1860s, Ukiyo-e prints found its way into Paris. While it had become too common in Japan that they were used as packaging materials, it became a craze in Paris. French artist Felix Bracquemond first saw a Hokusai Manga wrapped around a porcelain piece.

The style of the Japanese woodblocks were so new to the artists in Western Europe and immediately became a source of inspiration. American painter James Whistler was among the first artists influenced by Japonism, creating several Japanese-style paintings, such as the “Princess from the Land of Porcelain” that can be seen at the Freer Gallery of Art in Washington, D.C.

Claude Monet adopted some of the elements of Japanese painting in his landscapes and portraits. It can be seen in his portrait, “Madame Monet in a Japanese Costume,” which he painted in 1875 and his landscape, “Apple Trees in Blossom” that was done in 1873. The asymmetrical composition and thin bushes of Japanese style of painting could be seen in Monet’s “The Church and the Seine at Vetheuil” that showed gentle coloring and a lighter touch.

Mary Cassat, an American Impressionist artist were inspired by Utamaro’s woodcuts and created 10 color etchings to pay homage to the Japanese artist in 1890. Paul Gaugin was also influenced by Japonism and used the woodcut style in his paintings, such as “The Vision after the Sermon: Jacob Wrestling with the Angel” that is now in the Gallery of Scotland.

Vincent Van Gogh created several paintings after seeing some Japanese woodblock prints, and was influenced by the designs of Hiroshige, which was seen in “Japonaiserie: Bridge in the Rain,” “Flowering Plum Tree,” “The Courtesan” and “Portrait of Pere Tanguy.”

Some of the eye-catching poster art of Toulouse-Lautrec employed the facial exaggerated facial expressions of Kabuki actors, as well as the colors and contours they used.