The civil war in Syria has already taken the lives of thousands of people and displaced millions more. Various cities have been left in rubbles. Marks of an ongoing war can be seen across the country. Cries for help and refuge can be heard all the time.

Syrians are faced with the tough decision of leaving without guarantee of being accepted elsewhere or staying behind and possibly be killed by the next bullet. For some Syrian artists, leaving was the best option. They have faced their homes behind in search of a better place to live in. There were those who have left their loved ones behind, and they are committed in seeking for more attention from the international community to provide help.

As they have finally escaped the hell that they have been through over the past years, these artists have made use of their unique experience as an inspiration to create unique art. They allow their journey during the most difficult times to be seen by the world through their artworks.

According to Khaled Samawi, an artist whose gallery is reflective of Middle Eastern arts, there is an increase in the number of artists who are becoming more interest in showcasing their work to the public. They view it both as a vehicle to express themselves and allowing others to see the effect of the Assad regime. International museums have also become more interested in featuring the creations of Syrian artists. 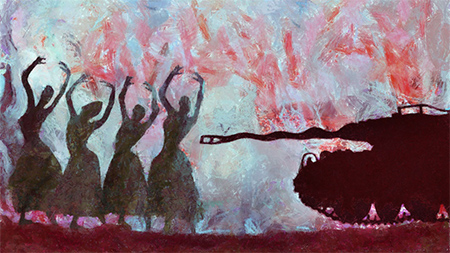 There were other Syrian artists who have gone beyond simply expressing themselves through arts. Khaled Samawi for instance started the Ayyam Gallery in 2006 to provide an avenue for local artists to showcase their creations. It was at a time when Syria has just felt the economic and social reforms placed by President Assad. With what Khaled has started, Syrians along with Iranians and Iraqis who are considered as rising stars of Middle Eastern arts founf their voice.

Since the war, things have changed. Khaled’s studio which is now in Dubai was turned into a home for artists who have lost their studio spaces and their own homes back in Syria. There were artists who had the chance to be recognized for their talent while in Dubai. They took the opportunity to seek for better refuge in cities like London or Paris.

Some others decided to just stay and tell their stories through paintings. There were artists who dared showing the actual horrors of war- decapitated bodies, pools of blood and corpses lying on the ground for days.

Back on their feet

Since escaping their country, some Syrian artists have gotten back on their feet. Looking back at what they have gone through, they can only be grateful that they are still alive and have the chance to tell their stories. For thousands of other Syrians, including women and children, the chance just wasn’t there.

Back in Syria, Assad still tries to paint a different image among his most loyal followers. For those who support the regime, life is different. In fact, there were artists who stayed home and were allowed to by Assad to continue working. He may be critical in some other matters, but he was always supportive of the arts. He has in fact increased funding for museums and galleries. Of course, there’s a caveat. Artists are not allowed to be overly critical of the government. God knows what could happen to artists who disobey Assad.

Featured and 1st image by http://magazine.art21.org/2016/01/21/confronting-crisis-an-interview-with-syrian-artists-tammam-azzam-sara-shamma-kevork-mourad/#.WLGi5_mGPIU