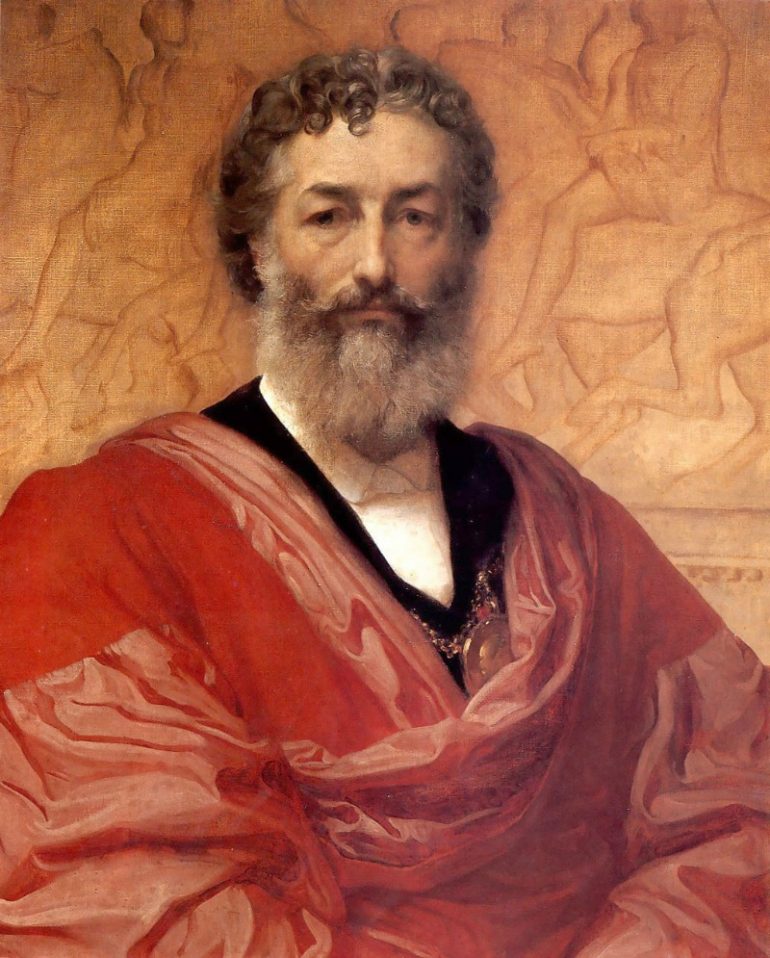 Sir Frederic Leighton, a prominent painter, illustrator and sculptor, was a famous Victorian artist, who had a major influence in the revival of Neoclassical art in England. His body of work ranged from myths, to ancient Roman and Greek subjects, medieval, Biblical and other religious themes, to portraits and genre paintings. He was likewise a talented sculptor, just like Sir Edwin Landseer, who was also an important English artist in the 19th century. Frederic Leighton was exceptional in his rich color schemes, particularly in his paintings of subjects dealing with ancient Romans and Greeks.

Frederic Leighton, 1st Baron Leighton PRA was born to a prominent English family on December 3, 1830. His family was in the export and import business although his father was a doctor to the Russian Royal family living in St. Petersburg. He never married and his family fully supported his training and art career, which started at the age of 10. He received his education in various parts of the European continent. He attended the University College School in London, Stadel Institute in Frankfurt and at the Accademia di Belle Arti in Florence, among others. When he was 25 years old, he lived in Paris and stayed there for four or five years. During that time, he met prominent French artists such as Millet, Corot, Delacroix and Ingres.

He was 24 years old and studying in Florence when he painted the procession of the Cimabue Madonna (Madonna is Carried in Procession Through the Streets of Florence). This particular painting brought him quick recognition when it was bought by Queen Victoria. Also a sculptor, he brought British sculpture back to prominence when he created the “Athlete Struggling with a Python,” a figure in bronze that he produced in 1874.

Leighton was influenced by the Italian and French masters of the 17th century. He greatly contributed to the figurative painting tradition in England and was notable for his strong sense of color, as seen in his painting titled “Flaming June.”

He was elected the Royal Academy president in 1878 and became the only peer ever created among English painters.

Frederic Leighton received drawing lessons in Rome when he was only 10. He later attended Academy classes in Berlin, Frankfurt, London and Florence. While in Frankfurt at age 13, he trained at the Stadel Institute, where he was taught by history painter Eduard Jakob von Steinle, a member of the Nazarene movement that was composed of German Romantic painters of the 19th century. 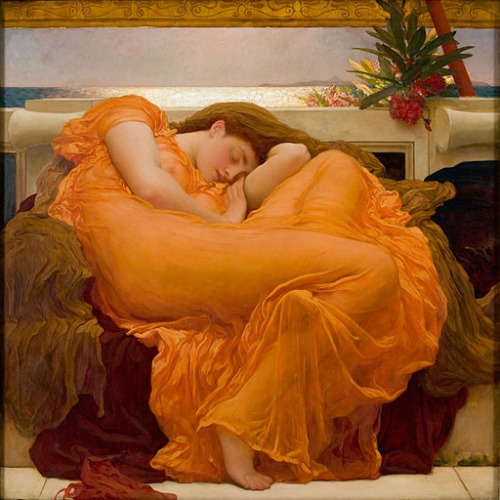 Although already established in England, Leighton still went to Paris. His art continued to mature and his heightened sense of color, influenced by the Italian and French masters of the 17th century, was developed. He also showed a leaning toward classical subjects. His painting of ”Orpheus and Eurydice” was particularly intense emotionally.

Leighton became associated with the Pre-Raphaelite movement when he returned to London in 1860. Eight years later he was elected an associate of the Royal Academy of London and in 1878, became its president.

Although he only created three major pieces, Leighton was an accomplished sculptor as well. It was in 1877 when he created his first bronze called ”Athlete Wrestling with a Python” that became a symbol of the rebirth of sculpture art in Britain. In 1886, he produced “The Sluggard,” which was also a beautiful piece of work, as well as the enchanting figure of a nude girl looking at a frog, called “Needless Alarms.” The latter is much admired for capturing the gentle contours of the young female figure.

Leighton bequeathed his house to the local council prior to his death on January 25, 1896 at the age of 65.