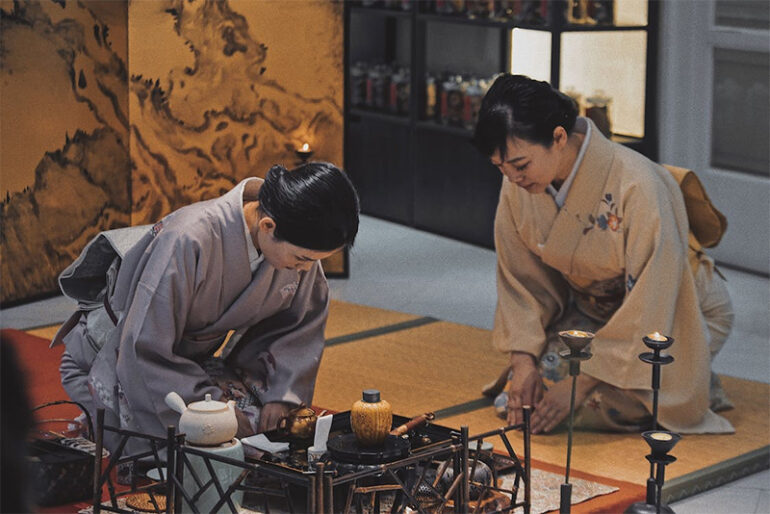 Previously, it was within Japanese tea ceremonies were reserved only for those who are ranked highly within society such as honorable warlords and influential zen monks, a Japanese tea ceremony, 茶道, sadō or chadō in Japanese, is an event wherein tea is prepared, served, and drank while following a ritual and a ceremony. On another note, the tea that is famously used for these ceremonies is a powdered tea called matcha, more commonly it is called green tea. These ceremonies take place to show hospitality to a host and their respective guest/s, to add the Japanese also see this tradition as a way to gain inner peace.

The formal affair is an event that occupies a couple of hours for the hosts and the guests and traditionally commences with a kaiseki course meal, after the meal is completed, guests are then served a viscous bowl of thick tea then ending with a bowl of thin tea. Due to the long tradition of tea ceremonies, even the slightest of hand movements are trained in schools. It is standard for a tea ceremony to follow a strict dress code, that avoids using loud fashion and fragrances that can lead to distraction during the ceremony. Ceremonies follow a long list of rules which is why it is best to be familiar with the practices before attending one so as to pay respect for the trade.

For these ceremonies, the bowls used for drinking tea are among the most valuable tools that are utilized during the ceremony. There are numerous guidelines on how to properly hold the bowl and set it on the floor. Moreover, tea ceremonies have two separate bowls used for winter and summer. Tsutsu chawan, the bowls that are used during winter are made to be deeper to keep the tea warm during the cold weather. Conversely, shallow bowls are used during summer to go with the season. When a bowl is broken, it is not thrown away, instead, the pieces are collected and fixed by concealing the fractures with gold.

Occasions for a Ceremony

In comparison to the traditional tea ceremonies of the Chinese, where ceremonies are only held for weddings, the Japanese hold this special event for all kinds of occasions. When there are guests invited to a host’s tearoom, it is usually to commemorate special occasions or seasonal changes like the beginning of a new year, cherry blossoms, the tea harvest, or the leaves in fall. However, these ceremonies are not an everyday occurrence because in Japan they usually steep tea instead of using matcha that has been ground. It is also worth noting that these ceremonies are held in a room made for hosting tea ceremonies.

A Japanese tea ceremony is an event that follows a long line of traditions and practices and is an occasion that is used to mark significant events throughout the year or used to celebrate the accomplishment of someone. Other than the celebration of significant events, the training that it takes to follow the etiquette of this long-standing tradition takes a great deal of training which in itself should be considered an art.

1st and featured image by https://www.pexels.com/photo/unrecognizable-people-in-kimonos-sitting-on-tatami-in-tea-room-6249722/