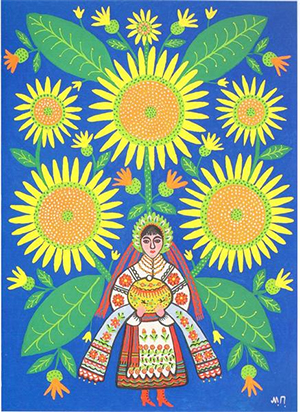 The conflict in Ukraine is taking up a lot of attention right now. While there are many elements we can focus on, it is the culture and art of the country we should look at closely. Many people have the mistaken idea that Ukraine is simply another part of the Russian cultural sphere. That is an easy mistake since the country was part of the greater Russian empire for centuries. Noted artists born in Ukraine like Ilya Repin and Alexei Savrasov have a reputation as Russian painters, not Ukrainians. However, the most-loved Ukrainian artist is Maria Prymachenko. While not well-known to most of the world, the artist is a legend in her own country.

Maria Prymachenko entered the world in 1908 and left it in 1997. That is a life that spanned the 20th century and all the changes that Ukraine faced. Born when the last Russian tsar still lived, her original home was near Chernobyl, long before it earned its infamy. From there, she saw the revolutions and changes through nine decades.

Prymacheko’s beginnings in the art are unique. As the daughter of peasants, she learned the art of embroidery from her mother. She also developed skills in the uniquely Ukrainian art of pysanka, which is the decorative art of Easter eggs. Prymachenko’s skills in embroidery caught the eye of Tetiana Floru, a Kyiv-based artist that recommended she join the Central Experimental Workshop of the Kyiv Museum of Ukrainian Art. They were working on an exhibition that quickly launched her to fame. It enabled her work to appear in places like Moscow, Leningrad, and even Paris.

It was in Paris that Pablo Picasso saw Prymachenko’s work and praised it. To the great master, her work was an artistic miracle. Exhibitions of her beautiful works were common in the former Soviet Union and Ukraine. There were also exhibitions in France and Canada, which have a sizable Ukrainian immigrant population. In 1966, Prymachenko received the Taras Shevchenko National Prize of Ukraine. While she died in 1997, UNESCO honored with by naming 2009 as the year of Prymachenko.

As a self-taught artist, Prymachenko used folk themes in her art. All of them display Ukrainian styles that everyone in the country recognizes but are rendered with colorful beauty. Her nationalistic art makes her popular in the country, with her art finding itself on stamps and coins. There is even a minor planet named in her honor.

Prymachenko’s art is uniquely Ukrainian and worth a second look. Early in the war, several of her paintings were in danger when the museum that housed them caught fire. Fortunately, a volunteer rescued 25 of them. The bulk of her work is in Kyiv, at the National Folk Decorative Art Museum. 650 of her paintings are there and as the siege continues, they face continual risk. Hopefully, they survive so that they see the end of the war and highlight Ukrainian culture more.

1st and featured image by https://www.wikiart.org/en/maria-primachenko/may-i-give-this-ukrainian-bread-to-all-people-in-this-big-wide-world-1982