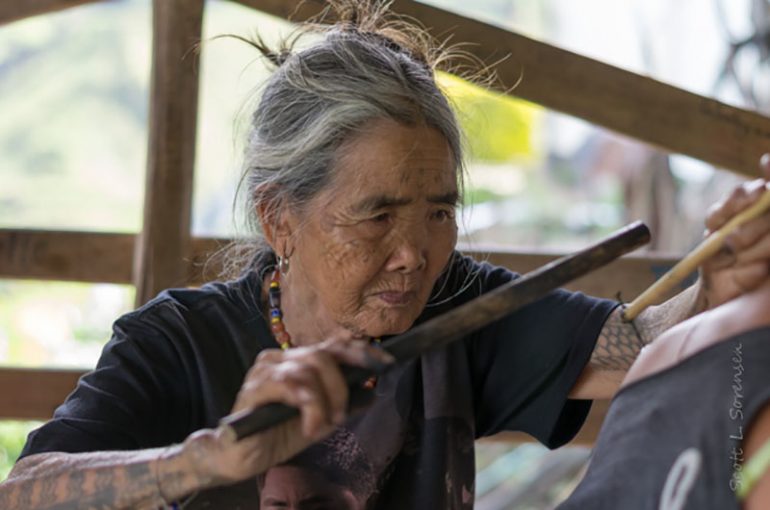 Whang-od Oggay is regarded as the last Mambabatok or Batok artist in the Philippines. Batok is considered as a traditional tattoo in Buscalan, a barangay in the municipality of Tinglayan, located in the province of Kalinga in the Philippines. The place is located on the Northern part of the country. It attracts several tourists each year because of the cold weather and its gorgeous landscape. Aside from this, another thing that entices people to visit the place is to see or even experience how Batok is done by Whang-od Oggay.

Whang-od was born in 1918, which means she’s around 97 to 98 years old as of this writing. She is part of the Butbut Kalinga tribe, which is an indigenous group in the Philippines. Whang-od has been tattooing for more than 80 years and she herself, as well as the elders in their tribe are filled with tattoos. The traditional tattooing was done as a sign of power to their men. A Batok (tattoo) is added on their body that corresponds to the enemies that they killed. Women on the other hand get their tattoos to beautify themselves.

She is dubbed as the last mambabatok because this art of traditional tattooing is no longer practiced by the younger generation in their village. It is also believed that this skill should only be passed to those who are in her bloodline or the tattoo would be infected. Whang-od got married but her husband died due to an accident when she was just 25-years old. They didn’t have kids and she also didn’t remarry after. However, she is now training two youngsters who are in her lineage to continue the art. One is her grandniece Grace Palicas and another successor Ilyang Wigan.

How Batok is Done 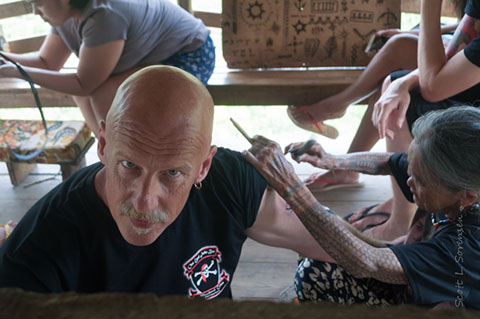 Machines and different colors of ink are typically used in modern tattoos. This is not the case with the traditional tattooing in Kalinga or pambabatok. The thorn of the pomelo tree or calamansi plant is used as a needle. Water and charcoal are then mixed together to form an ink. According to many of those who have experienced this, the pain is more intense than that of modern tattooing. You need to have high pain tolerance and you should be one hundred percent sure about this before getting one. Whang-od would know if the person being tattooed could still bear the pain or not. If she sees that the person couldn’t bear it anymore, she would refuse to move forward with the tattooing.

Many foreign tourists visit here to experience this traditional art of tattooing and are charged for it. The image of Whang-od has also gone international, with one being included in an art exhibit called “Tattoos: Ritual. Identity. Obsession. Art” in Ontario, Canada. It was also included in another exhibit in a museum in Paris.

It’s not just regular local and foreign folks that go to Kalinga to get a tattoo from Whang-od. Even Filipino celebrities like Drew Arellano and Rhian Ramos got a Batok from her too.