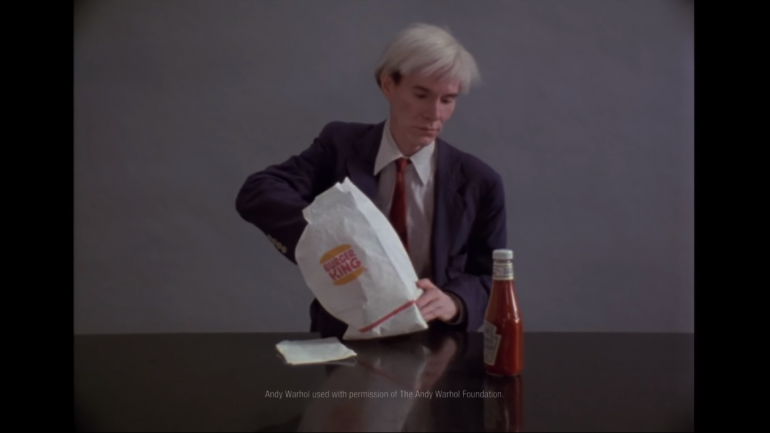 Art lives forever, and this goes for pretty much everyone. Stacks of research papers and documentary films have been dedicated to the biggest names in art, and in this age, artists now also have better means to preserve their works for people to enjoy for years to come. And no artist has ever used such technology to the fullest than the master of Pop Art, Andy Warhol.

Even after his death 32 years ago, Andy Warhol can still make news and prove why he’s the leading figure when it comes to pop art. In a recent Super Bowl commercial (for Super Bowl LIII), Andy Warhol was shown with a Burger King Whopper, which he proceeds to take it out from the Burger King-labelled paper bag and the Whopper carton box, and consume it after a small dip of Heinz tomato ketchup. This confused a lot of people because he’s been dead for over thirty years, and had a lot of them asking if it was all fake. Fortunately, no, and it is the kind of art you’d expect from a visual artist like Andy Warhol. In fact, the footage was actually part of a 1982 film by Jørgen Leth called “66 Scenes From America.” The subject, of course, were things that describe modern life in the US. And nothing screams “America” more than pop art, Andy Warhol, and burgers.

The scene was about four-and-a-half minutes long and features Andy Warhol eating the burger without much emotion, except for the part where he tries to, with great difficulty, get some ketchup out of the bottle. Completely deadpan, Warhol, attempts to put the focus not to him, but to the act of eating the burger itself, which is seen as something “American,” the subject of the film.

Burger King press release stated that they tried to break the traditional commercials they usually show in Super Bowl by presenting a powerful work of art instead. Of course, Burger King had to ask permission from the Warhol Foundation and from anyone representing Jørgen Leth, which includes his son. In the video, the line “Andy Warhol used by permission of The Andy Warhol Foundation” appears as the video play, then the message #EatLikeAndy.

Burger King been teasing their #EatLikeAndy campaign for quite a while before the Super Bowl. They teamed up with DoorDash, a meal delivery service, and ran a campaign where people who ordered a Burger King meal using the promo code “” received the same things seen on the video, an Andy Warhol-esque wig, an empty ketchup bottle, the vintage Burger King paper bag, a code for a free Whopper, and a note telling people to use the code and order the Whopper after the Super Bowl. The Mystery Box offer was limited and only 6000 people got to order it.

They also ran another ad to promote the DoorDash campaign with the Burger King mascot painting something. The ad was titled “Art takes time,” and urges viewers to use the promo code when ordering a Burger King meal from DoorDash.

Soon after the ad made its way to social media that people posted different kinds of facts about the video or Andy Warhol. One piece of detail came from Artsy.com, where they detailed that Warhol isn’t actually a fan of burgers, but has a very aggressive sweet tooth instead, which shows in a lot of his art pieces, like Ice Cream Cone and Life Savers.

Another trivia is from Adweek’s Twitter post that says: “Fun fact: Andy Warhol actually asked for a McDonald’s burger when he recorded this scene in 1981,” with the story going on that the crew who shot the film only had Burger King with them at the time. They offered to get someone to run to the nearest McDonald’s to get Warhol a burger but Warhol let it go and agreed to eat the Whopper instead. Of course, Burger King isn’t going to take that bit of trivia down and replied that “it doesn’t matter who you flirt with, it matters who you take home.”