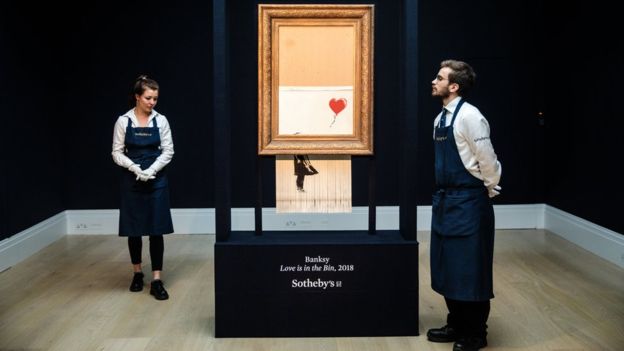 You may remember that a few days ago Banksy, a well-known British artist, pulled the biggest prank in the art world at Sotheby. Many people were quite shocked that all of a sudden, the Banksy painting, the Girl With Balloon, was destroyed in front of scores of people attending the auction at Sotheby. The cause was supposedly a shredder hidden inside the frame of the painting. A lot of people laughed at the story as it spread all over the Internet. Some were quite impressed with the trolling. Some are convinced that the painting just became even more valuable.

And yet some are convinced this was all just a hoax and that Sotheby, and the buyer of the painting at the time, were in cahoots with Banksy for the “performance”. There are lots of unknown details at the time that people cannot help but suspect the event was really just a hoax. After all, Banksy is a troll and trolls don’t discriminate on targets. As long as they get to prank someone, anyone will do, it’s fine.

However, in an article published by The Art Newspaper, it seems that the prank may be real after all, as the article answers some of the key details missing by earlier articles. It so happens that Banksy denied any allegations that there had been any collusion of sorts with Sotheby with the shredding of the painting. He was also surprised that the built-in shredder was able to get past the security and anyone who had access to the frame and the painting. Sotheby, too, denied any allegations that they knew that there was a shredder inside the painting’s frames.

The painting was originally owned by a person named Jo, to whom Banksy gave the painting for an exhibit in Los Angeles, in 2006, according to Banksy’s authentication board Pest Control. The only “Jo” linked to Banksy was Jo Brooks, but Brooks already declined to comment if it was her.

Another fact that came to light was that the painting was required to be hung in the auction room as well as to be sold in the evening sale. This was dictated in the consignment of the painting. Alex Branczik, head of contemporary arts for Sotheby, explained that such conditions are common. “There are people who want their works hung in the room because they believe that the assembled crowd are likely to bid more”, he explained.

“It was more like a sculpture”, he said. “If it says the frame is integral, you don’t rip it apart.” 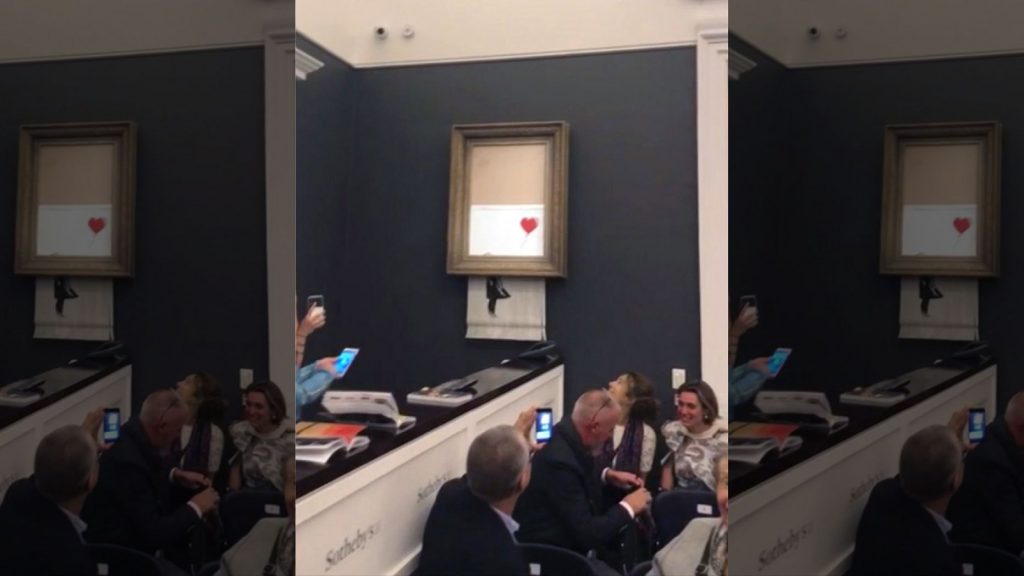 One of the auctioneers that night, Oliver Baker, seems to share the opinion of those who are familiar with Banksy, or trolls in general: that it was “part of the joke” that Banksy included the shredder into the frame and told everyone handling the work that the frame was an important part of the painting.

Those unfamiliar with the concept of art destruction and modern art would probably scratch their heads if they heard the official Sotheby statement, which says that Banksy did not destroy the painting, but created a new one which, in their opinion, adds more value to the work, and the shredding of the painting was intentional. “This is the artwork that Banksy intended,” Branczik added. “It was designed to be like this.”

In any case, Banksy gave the work a new name: “Love Is In the Bin“.

1st Image: Love Is In The Bin, by Banksy, via BBC

2nd Image: The Girl With Balloon shredding during the Sotheby auction, via Fox News