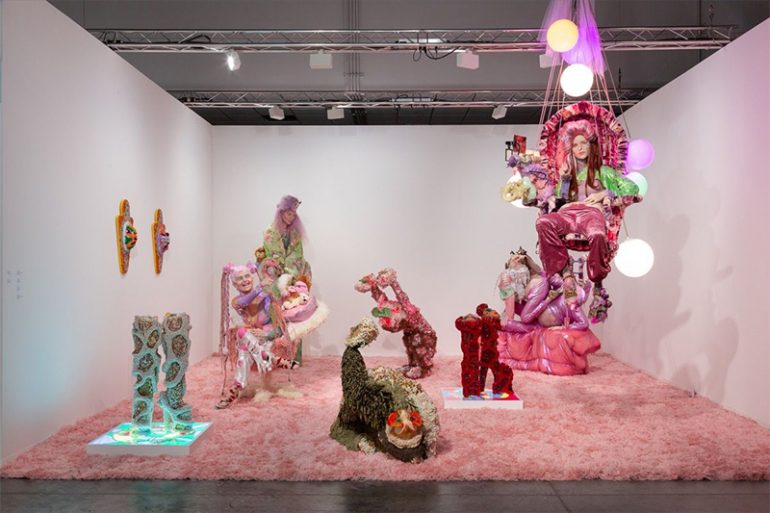 Whether you’re talking about Dior or Diesel, fashion houses of all kinds genuinely understand that Miami Art Week just like 2020 spring fashion shows is the perfect time to invite an artist-in-residence. What better way to wrap up a week than to blend style with art? For instance, Desigual partnered up with Carlota Guerrero, a performance artist based in Barcelona for a piquant live show and Coach collaborated with WhIsBe, a street artist who painted an indoor mural of his charming and famous Vandal Gummy bears.

Furthermore, Hublot tapped Shepard Fairey again, the talented person responsible for the making of Barack Obama’s “Hope” project poster and OBEY art project, to embellish the grand reopening, as well as the five-year anniversary of their Design District outlet. After how many months of renovation, the newly-styled boutique that boasts gallery-like interior, offers a more refreshing atmosphere with tones that are inspired from the shores in South Beach. Fairey revealed his newest mural creation at a local arts high school called DASH that Friday morning before visitors made their way to the Galerie to enjoy lunch together with the artist.

On the other hand, there are also satellite events that were organized explicitly for individuals who love their yachts as much as they do with art. It was in Friday evening when Sanlorenzo, an Italian superyacht manufacturer, kicked off the event with an aperitivo cruise together with its Owners Club members and Marco Palmieri, an Italian artist. On the next day, it was a Sunreef yacht that is custom-wrapped in the works of Miami-based artist Alexander Mijares, which set sail starting from the Fontainebleau Marina.

An art event – on land – wouldn’t be complete without some party going on. A$AP Rocky spiced up Story while it was Swizz Beatz who took care of the duties of a poolside DJ in an event at the W South Beach that gave honor to raising artists LaKela Brown and February James – and others who already landed in Miami a day earlier might have a chance to see Paris Hilton playing at the similar location the night before.

Basel festivities flamed up to the Shore Club for after party together with WhIsBe. A gigantic 7-foot Florida-orange Vandal Gummy that was placed on the center of the pool surface received a lot of attention that night, while Irie, who is known as the official DJ at the NBA, emceed the event. There’s nothing more Miami than this.

But aside from yachts, outlets, and hotel lobbies that had a great time making their galleries, the most sought after pieces of art were only located at the Basel Miami held at the Miami Convention Center.

Here are the highlights of the event: George Condo impressed the crowd with his ink and graphite sketch called The Reporter and a bronze statue, titled The Liquor Store Attendant. David Hammons sold his white mixed media for $2.4 million on the first day of Art Basel – one of the most impressive sales ever recorded this year. I

1st and featured image from https://www.artsy.net/article/artsy-editorial-10-best-booths-art-basel-miami-beach