Whenever you talk about the Old Masters, common folk would at times guess who are you talking about. Art students would be able to name a few off their heads, including the 4 best during the Renaissance: Michelangelo, Leonardo Da Vinci, Raphael, and Donatello. Senior students would probably be able to recite everyone, even the more older ones, very easily. One of those older artist is Cimabue. More commonly known as Cenni di Peppi (or Bencivieni di Pepo in old Italian, Benuvento di Giuseppe in modern Italian), he is very well-known for the frescos he did for the Church.

He is the oldest and, thus, first among the Old Masters, according to an account by Giorgio Vasari, though there is no evidence that exist today to support his claim. “The first light to the art of painting,” he called him. Even so, some people accept this account and would name him “The Father of Italian Painting.”

Little is known about his life, except a few hints here and there and the accounts written by Vasari. There are plenty of people who would ignore Vasari’s account because of the uncertainty of his sources. Historian Clara Erskine Clement claims that the Cimabui family were nobles, and that Giovanni (Cimabue) was allowed to be a painter by his family. He was a genius and painted with passion. With his skill he became one of the starting points of the Renaissance. It is said that he was influenced by another painter, Coppo di Marcovaldo, a Florentine Italian painter. But after that he was able to create his own style. 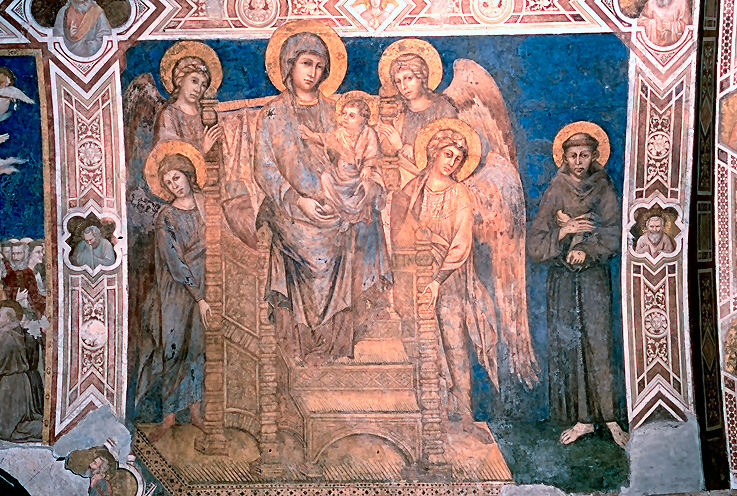 He’s know to have lived in Rome in 1272. There’s only one known work that was attributed to Cimabue that has survived: that of the St John mosaic located in the Pisa Cathedral. He’s also attributed to other religious paintings, one of which are the Upper Church of S.Francesco fresco, in Assisi. These paintings show the Four Evangelists, the Life of Virgin Mary, the Apocalypse and the Crucifixion, and the Lives of St Paul and St Peter. The frescos were preserved poorly, damaged by the earthquake in 1997, but much of it remains and were restored later. These frescoes are a testament to his skill when using the architectural space he’s provided. Another work attributed to him that showed his skill was the S. Trinita Madonna, an altarpiece and is considered one of the best paintings of the Madonna and Child. The S.Croce Crucifixion is another work attributed to him. This, too, was damaged at one time, in the floods of 1966, to be exact. It was fully restored later on.

And there are other works that were attributed to him, but the credibility of those claims will remain a bit questionable. At the time artists rarely sign their works due to the persecution of the Church and the iconoclasts so its hard at times to find the masters of unsigned works.

Even with the persecution, Cimabue became one of the beacon that signaled the beginning of Italian painting and the Italian Renaissance. He left a legacy to future artists and was even referred to in Dante’s Purgatorio.

He’s successful as an artist though, and had taught many artists after him. One of them was the genius Giotto Di Bondone, an Early Renaissance painter and architect. He was also known to have been a generous man, being kind to lepers and beggars, and loves cats. It was even said that, at one time, he had 33 cats in his care.

In 1302, Cimabue passed away. He is laid to rest in the Church of Santa Maria del Fiore. On his tomb it was inscribed: “Cimabue thought himself master of the field of painting. While living, he was so. Now he holds his place among the stars of heaven.”