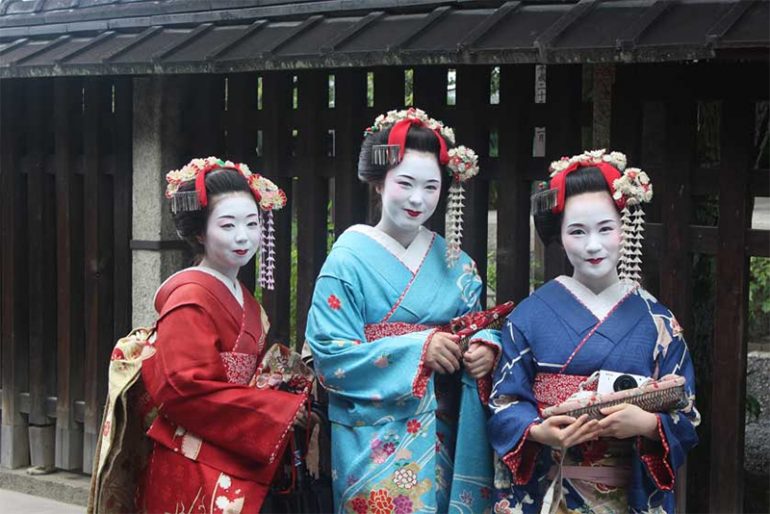 Clad in t-shaped robes and personified in ultra-white makeup and some colorful nail art, Geishas perform various kinds of art to entertain the crowd. The labor and sweat they put in, in order to be considered as “artists” enabled them to get massive respect from the people in different parts of the country. These Japanese women use gorgeous Kimonos as their signature attire.

Geishas are well-known as artistic icons in Japan. The culture and tradition of being a Geisha are deeply-rooted in all parts of the country, but several cities continue to preserve the ancient traditions, including Kyoto as the leading name. For example, in Tokyo, you need to have approximately 6 to 12 months of training to be considered as a Geisha; on the other hand, women based on Kyoto have to train for five years or more.

The history of these artistic Japanese women is as fascinating and intriguing as their talent for presenting various tasks. Ingenuity and artistry are the two ideas which co-existed with human existence. Even before there were Geishas in Japan, art was already present. In 1589, Toyotomi Hideyoshi, a Japanese military leader, permitted the building of Shimabara – a structure dedicated to life pleasures such as art, dancing, drinking, and high-end prostitution. During those times, male musicians and drum players called themselves “Geisha” which denotes “Artist”.

Prostitution was rampant back then, mainly because it was considered illegal. To gain many high-class and affluent customers, Courtesans or Oiran were made to render their services at the Shimabara. As time passed by, courtesans began to experience the complications of life and males who wanted to work as an Oiran needed to follow intricate customs and rituals which they couldn’t fulfill. Fortunately, tea houses or Ochaya began to operate across Shimabara. Several women started to practice prostitution at a much affordable rate at the Ochayas. Two categories of women are actively working inside tea houses: the Sancha-joro or the prostitutes and the Odoroki or the musicians. Later on, low-cost prostitution became a thing in the area, and these women started gaining popularity in the metro. That’s when they introduced themselves as Geishas, similar to males who work at the Shimabara.

Female geishas became more famous than the males; thus, the latter was eliminated entirely – establishing the name solely for the females. When 1700 rolled in, stricter laws were introduced by the government. Prostitution was utterly banned, giving geishas the freedom to render their services as entertainers only. The new law suggested that they need to tie their Sash or Obi in the back to make it hard for them to strip down their Kimono.

Hairstyles and makeup were also revamped by the latest law, in order for the geishas to look simple compared to the courtesans. By 1750, the Oiran had disappeared entirely from the society, which gave way for the Geishas to gain big respect and appreciation in the society. They are far more superior than typical women, but they also experienced backlash from society.

1st and featured image from https://www.japanvisitor.com/japanese-culture/culture-geisha