Near the end of the 19th-century the Filipinos, oppressed by their Spanish masters for 300 years, was like a cup whose contents were nearly going to overflow. The result of that overflow would be much bloodshed and deaths for years to come. But this was only if you were a peasant working in the fields in some province of Luzon. Miles away in Europe, a bloodless war was being fought by the more privileged Filipinos. The Illustrados, the privileged sons of the Filipino people, hoped that one day Spain would recognize the country as a formal province of Spain and the Filipino people be given equal rights to those citizens of Spain. One such man was the famous painter Juan Luna.

His full name was Juan Luna y Novicio. Born in Badoc, Ilocos Norte on  October 23, 1857, he was the third son of Joaquín Posadas Luna. He grew up as an artist, influenced by many Filipino and Spanish artists, but he was a sailor by profession, graduating from Escuela Nautica de Manila (currently known as the Philippine Merchant Marine Academy). He studied in prestigious art schools both in the Philippines and abroad.

He became a painter when he arrived in Europe and was exposed to the Rennaisance works in Rome. Around that time he became a member of a group of like-minded nationalistic Filipinos. It was a group that included familiar names like Jose Rizal, Lopez-Jaena and Del Pilar. It truly was the Philippine’s finest group of intellectuals, all set out with the goal of making the world recognize that their nation was not a nation of barbarians, but of individuals capable of competing with the rest world.

For Luna to meet this goal, he had only one way: to paint. By 1881, he executed several paintings that were exhibited in the 1881 Exposition in Madrid. With the painting La Muerte de Cleopatra, he received the second place and won a silver medal. He was afterwards contacted by the Philippines’ Colonial Government and was awarded a pension, but on the condition that he produced a piece that would highlight the history of the Philippines. But before he worked on that, he created his first and best masterpiece. This was arguably his greatest work that now hangs at the National Museum of Fine Arts in Manila: The Spoliarium.

The Spoliarium was a project that took him three-quarters of a year to finish, partly due to its size. He began the work in 1883 and finished it in 1884. He first shipped the painting to be submitted to the Exposition in Madrid that year. It won a gold medal of that year. By 1886 he sold the painting to the government for 20,000 pesetas.

There was much celebration to the Filipino community in 1884: While Juan Luna took first place, another Filipino took second place: Felix Resurreccion Hidalgo. Covering both first and second places the Filipinos cheered for the victory of Luna and Hidalgo.

Luna’s goal to show the world that they, the Filipino people, could compete in any field, was met with approval. He lived with quite a prestige afterwards: He met the King of Spain, received a lot of commissions (including the one that led to the painting of The Battle of Lepanto). He moved to Paris the following year and opened his own studio. A year later, he finished the El Pacto de Sangre. This painting is the depiction of a traditional blood compact ritual performed between Datu Sikatuna and Miguel Lopez de Legaspi. It was this painting that was sent back to the Philippines as part of the deal with his pension. 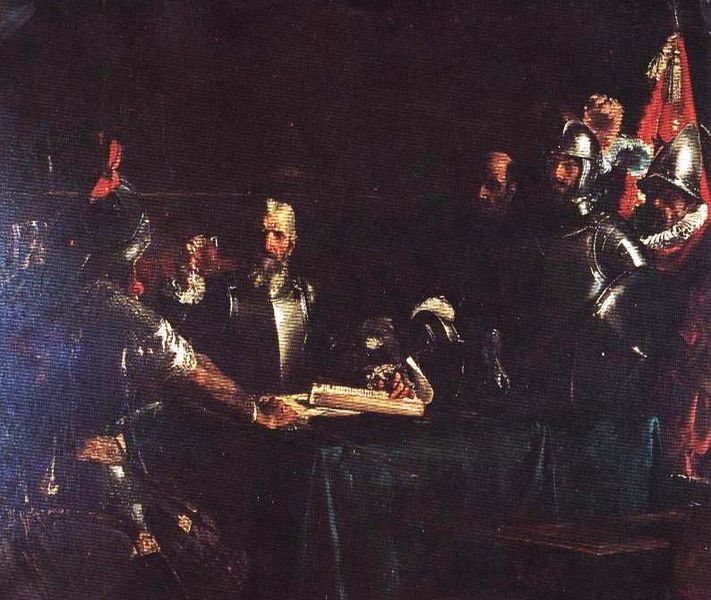 His happiness didn’t last long: he fell in love and married Trinidad Pardo de Tavera. He adored his wife so much but became suspicious about her. He finally learned about Trinidad’s affair with someone named Monsieur Dussaq. In a fit of rage, he killed his wife and his mother-in-law. He was arrested and charged with murder but was acquitted due to the case being a crime of passion. He was ordered to pay a fine, and with his brother, Antonio Luna, and son, Luna left for Madrid.

First Image: The Spoliarium by Juan Luna, via Manila Today