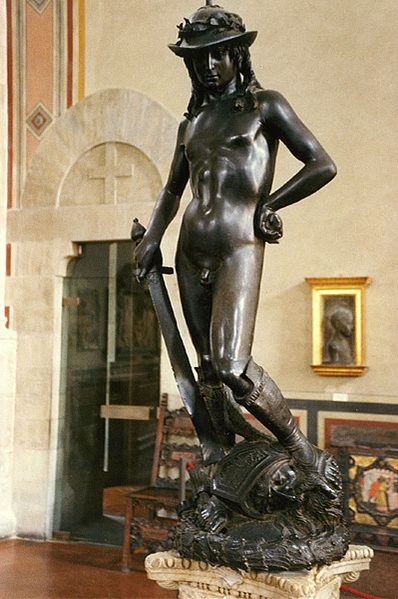 Donatello, a famous Florentine artist, was given the full name of Donato di Niccolo di Betto Bardi. He was born in Florence around 1386. Without a doubt, Donatello was one of the fundamental figures in sculpture during the Italian Renaissance. He was considered a major force in the Florentine Renaissance together with Leon Battista Alberti, Tommaso Masaccio and Filippo Brunelleschi. They inspired Early Renaissance art all over Italy, and Donatello was credited for reinventing the art of sculpture during that period.

He was a student of classical sculpture and best known for his shallow relief sculpture called basso rilievo. He was highly skilled in using various materials and produced works in wax, stucco, clay, wood, bronze and stone. Donatello’s sculpting skills allowed him to breathe life into his sculptures by impressing them with narrative and a combination of potent emotion and realism. Donatello’s career was long and productive, and he had many assistants. Most of his sculptures were in the round but having developed basso rilievo, he created a number of small works in the new style. He also produced a huge amount of large architectural reliefs that graced many buildings, palaces and churches.

One of the most famous of Donatello’s works is the nude David in bronze. He actually created two David sculptures. The earlier one was a clothed David done in marble, which was commissioned in 1408. The bronze one, depicting a very young David who was completely naked except for his hat and boots, held Goliath’s sword in his right hand, with the giant’s head at his feet. In several museums in Europe are some of his other famous sculptures, such as Mary Magdalene, the equestrian statue of Gattamelata (Erasmo da Narni), Feast of Herod, Zuccone, St. George, San Michele, St. Mark, and The Prophet Habakkuk.

The first training of Donatello was in goldsmithing. He later joined the studio of 14th century sculptor Lorenzo Ghiberti. Before he embarked on his solo career, Donatello helped Ghiberti complete a number of statues. He also collaborated with Jacopo della Quercia from Siena.

Donatello’s Statue of David became his masterpiece. It created a sensation because it was a huge departure from the prevailing Christian art at that time. David was realistically presented as a nude young boy that’s quite effeminate in form and features. The statue stands just a little over five feet (159 cm). The figure was slender and small, representing a person that looked too slight to be able to kill a literal giant of an opponent. It exudes an air of coquettish arrogance, which could be related to the Florentines’ awareness of cultural superiority.

Donatello was one of the greatest artists among the Old Masters and was a very influential sculptor. He exerted influence in the works of some of his contemporaries as well as several generations of painters and sculptors after him, including Giovanni Bernini and Michelangelo.

Featured and 1st image by Patrick A. Rodgers [<a href=”http://creativecommons.org/licenses/by-sa/2.0″>CC BY-SA 2.0</a>], <a href=”https://commons.wikimedia.org/wiki/File%3AFlorence_-_David_by_Donatello.jpg”>via Wikimedia Commons</a>