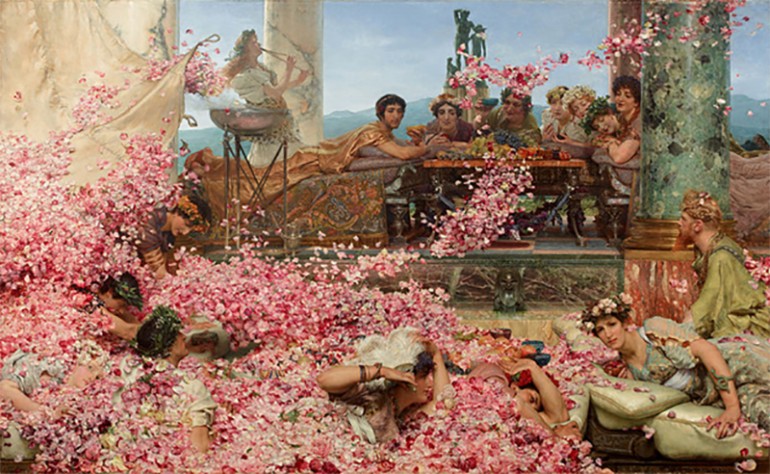 Sir Lawrence Alma-Tadema OM RA (Lourens Alma Tadema) was born in Dronrijp, Netherlands on January 8, 1836. He was a Frisian by birth but was granted special British citizenship. He received instructions at the Royal Academy of Antwerp in Belgium prior to moving to and settling in England since 1870 when he was 34 years old. Alma-Tadema was trained as a painter of classical subjects and gained fame for his depictions of the decadence and luxury of the Roman Empire. He was also famous for his fantastic, meticulous and realistic rendition of marble surfaces.

Alma-Tadema’s mother was artistically-inclined and thought that art should be included in her children’s education. While his family intended Lawrence to be a lawyer, he was diagnosed with tuberculosis at age 15 and was told that he only had a short time to live. Thus he spent his time painting and drawing. But the complete rest brought back his health and he decided to be an artist.

At age 16 he enrolled at the Royal Academy of Antwerp and studied early Flemish and Dutch art under Gustaf Wappers. He won several major awards during his four years of study at the Academy. Alma-Tadema became assistant to professor and painter Louis Jan de Taeye in 1855 before he left school and stayed with the artist for three years. De Taeye, who conducted courses in historical costume and history at the Academy, introduced Alma-Tadema to books that encouraged him to depict Merovingian subjects. His mentor urged him to show historical accuracy in his work, and this became a trait for which Alma-Tadema became known for throughout his career.

In November 1858 Alma-Tadema left the studio of De Taeye and settled in Antwerp where he worked in the studio of Baron Jan August Hendrik Leys, who was very famous in Belgium at that time. It was under Leys’s guidance that Alma-Tadema created his first major work called “The Education of the Children of Clovis” in 1861. It was exhibited at Antwerp’s Artistic Congress and was well received by artists and critics and started the fame and reputation of Alma-Tadema. Leys also noted that it was exceptional work but said that Alma-Tadema’s rendition of marble was like cheese.

The artist took this criticism to heart and he strived to improve his proficiency, leading to him becoming the foremost painter of variegated granite and marble in the world. 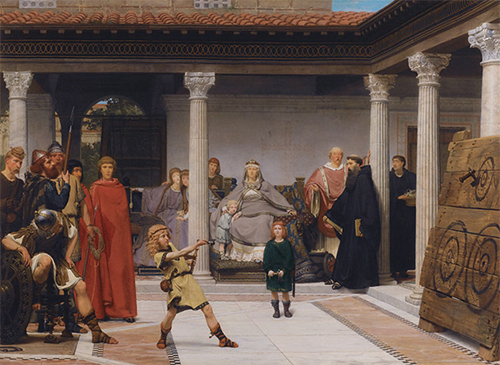 Lawrence Alma-Tadema became famous for his Antiquity paintings, but he was also quite adept at watercolor, landscape and portrait. He possessed the technical skills to realistically depict hard reflecting surfaces such as marble, pottery and metals as well as flowers and other textures. He has a mastery of color like the Old Dutch masters and brought playfulness and excitement to his rendition of ancient life.

He was a perfectionist and always strived for architectural accuracy. His works also brought attention to Sir Edwin Landseer, the celebrated animalier of the Victorian era when a retrospective of his works were held in 1879.

His enemies despised his works for being too encyclopedic, but he influenced many artists in Europe including Fernand Khnopff and Gustav Klimt. Because of his thorough archeological research, several of his canvases have been used as source materials for by film directors from Hollywood. These include films such as “Intolerance,” “Ben Hur,” “Cleopatra” and “The Ten Commandments” by Cecil B. DeMille. One of his paintings became the main source of inspiration for the film “Gladiator” while another one became the inspiration for the interior of the Cair Paravel castle in “The Chronicles of Narnia: The Lion, the Witch and the Wardrobe.”