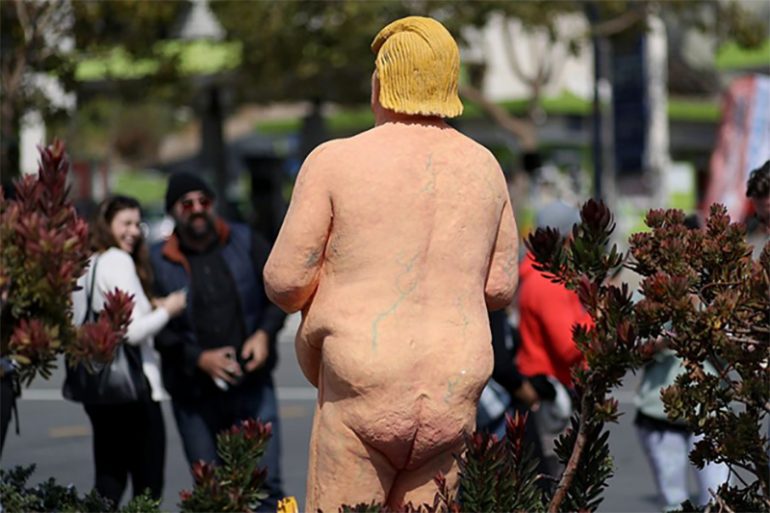 Donald Trump is a man who doesn’t seem to believe in the power of art. In fact, right after taking office, he has decided to slash the budget for culture and the arts. No one really took notice of it considering all other crazy policies he has introduced in a short span of time.

His presidency inspired a lot of street protests, starting with the Women’s March that took place after his inauguration. Some others decided to protest through arts. In an anti-Trump rally in January, Michael Moore, a filmmaker and vocal Trump critic, said that the president could be taken down with political satire. He encouraged people to form an army of comedy that would bring him down.

Satirical Trump art did not just start when he was elected to the White House. Just after his announcement to run for president, several artworks have already been created in protest of his proposals. From memes to murals and even sculptures, anti-Trump art can be seen almost anywhere.

In New York for instance, Trump was painted as a pile of dung by artist Hansky. In Los Angeles, a nude portrait of Trump with a small penis was created by artist Illma Gore. Of course, these artworks were met with strong public assault and even legal threats from Trump’s team.

Graffiti was a common method of protesting Trump. However, even in buses, dollar bills and other platforms, artists have come up with ways to express their disgust for Trump.

Perhaps, one of the most iconic artworks so far was that of Shepard Fairey. He created a poster of a Muslim woman wearing an American flag as hijab. He was also the same artist behind the 2008 Obama HOPE poster. This time, he created a poster using a similar technique, but as a subtle rebuke to Trump’s immigration policies.

A New York street artist has taken things to the next level. This artist named KATSU created a graffiti drawing drone. He formed a quadcopter which carried a spray that can write “Scum Trump”. The said drone can reach various places, especially those that are hard to locate.

Trump’s former campaign bus was also turned into an anti-Trump artwork. David Gleeson of New York and Mary Mihelic bought the bus from Craiglist for $14,000. The bus had a bumper sticker depicting the date of the inauguration. They edited the signs though so that Trump’s campaign slogan becomes “Make Fruit Juice Great Again”. On the actual inauguration day, they added two golden teardrops on the bus, which according to them; reflect how people feel with Trump as president.

Satire as an art form 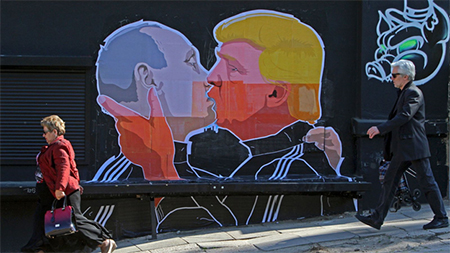 According to these artists, it is important that they connect with people through art. Considering that Trump’s presidency is something that worries most people today, creating anti-Trump artworks makes them feel good. In a way, they have become a part of the strong resistance against his policies. They provide a sense of relief to some people by letting them know that they are not alone in their outrage.

The anti-Trump sentiments have even spread in various parts of the world. The Trump kissing Putin mural in Lithuania has already become iconic. It is heightened now considering the revelations on Trump’s connection with the Kremlin even during the campaign.

In the UK, an artist painted a portrait of Trump as Captain America. It wasn’t meant to show him as a strong man, but because he thought it looked hilarious seeing Trump standing there all righteous. In Australia, a mural of Trump wearing a mask belonging to a Batman villain was drawn by a street artist.

All these anti-Trump artworks show just how much people are afraid of Trump being the most powerful man in the world. It also shows the power of art in conveying strong emotions.