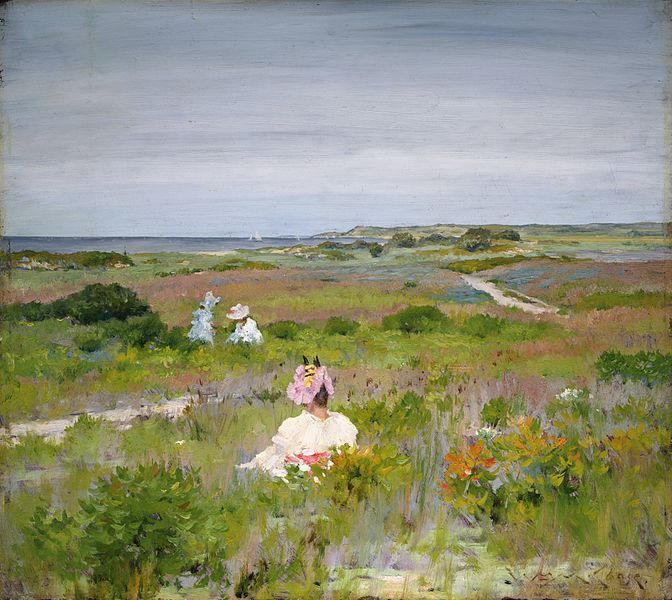 Indiana-born William Merritt Chase was the oldest of six children of a shoe merchant. He was born in 1849. He was interested in art at a young age and first studied under local artists Jacob Cox and Barton S. Hays. After serving in the Navy, he was urged by his teachers to go to New York to pursue further training in art. He did just that in 1869 and studied with Joseph Oriel Eaton, an American figure and portrait painter. Later Chase studied under LemuelWilmarth at the National Academy of Design.

Due to financial constraints, Chase left New York and went to St. Louis, Missouri to join his parents. He worked to help his family and at the same time became actively involved in the art community in St. Louis and even won prizes for his paintings. In 1871, he showed his first painting at the National Academy. His exceptional talent caught the interest of the wealthy art collectors in St. Louis who offered to finance his European visit for two years, in exchange for Chase helping them secure works of art from European artists and doing some paintings for them.

Chase enrolled at the Academy of Fine Arts in Munich that was the center for training in art at that timeand favored by American artists. He also thought that Munich would be less distracting than Paris. His mentors were Karl von Piloty and Alexander von Wagner. While at the academy he became friends with other artists from the United States, such as Joseph Frank Currier, Frank Duveneck and Walter Shirlaw.

However, he was more interested in the style espoused by French artists and those that were influenced by them, such as the works of Wilhelm Leibl, a German friend of Gustave Courbet. He was considered Courbet’s alter ego in terms of painting style, with his striking chiaroscuro and his showy brushwork. Likewise the realistic styles of Frans Hals and Peter Paul Rubens attracted Chase.

Eclectic by nature, Chase freely borrowed styles from different international artists while developing his own, envisioning ownership of the finest artist studio in the center of art in those days, New York. Upon his return to New York in 1878, he took on a teaching job at the Art Students League, which signaled the start of an esteemed career as an art teacher. He first rented a small studio at the first purpose-built building in Greenwich Village before finally taking over the large studio that was supposed to be the exhibition hall for all the artist tenants of the building. 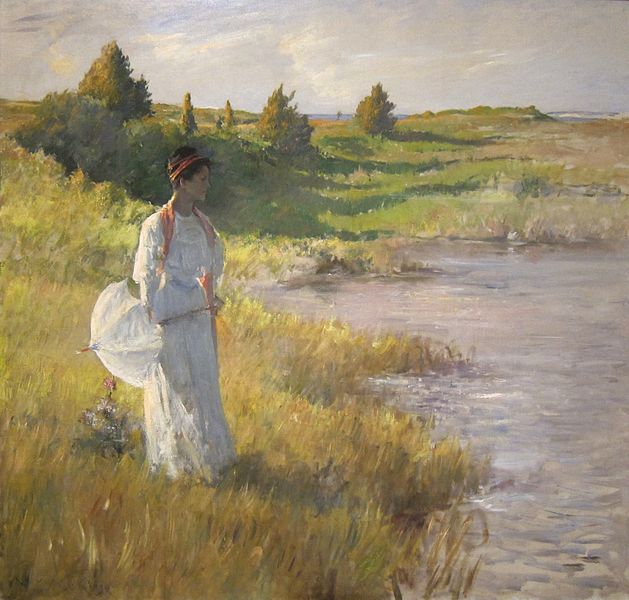 Shaping his own style

He had a number of trips to Europe to network and view collections and exhibitions, and in one of those trips he met an artist he already admired, Alfred Stevens from Belgium, who told him to not try making his paintings look like those done by the old masters and Chase adopted a more modern approach to his work, particularly those he did in his studio in New York. One artist who had a great impact on Chase’s style and choice of subjects was Édouard Manet.

The birth of his first child coincided with Chase painting Tomkins Park and Prospect Park. Later he painted Central Park as well as other public parks in New York and other places. Painting images of parks was important to Chase, maybe because of his admiration of other artists, such as John Singer Sargent whom he met in Europe and became his friend for life. He also met James McNeill Whistler in London and they agreed to paint each other’s portrait. Somehow, the monochrome portrait that Chase did for Whistler, possibly as a tribute to the latter’s popular painting, “Arrangement in Gray and Black, No. 1: Portrait of the Artist’s Mother” failed to impress the artist and he destroyed the portrait he had done of Chase. It could have been due to the exhibition mounted by Paul Durand Ruel, a popular art dealer from Paris, who showed close to 300 works of the top Impressionist painters including Claude Monet, Gustave Caillebotte, Camille Pissarro, Edgar Degas and Édouard Manet.

The park scenes granted him the chance to react to the styles of those he admired while still portraying elements that were aesthetically pleasing. The summers he spent teaching and painting at Shinnecock allowed him to once again showcase his impressions of the country and city lifestyle during the late 19th century, carefully blending modern styles and those of the old masters.