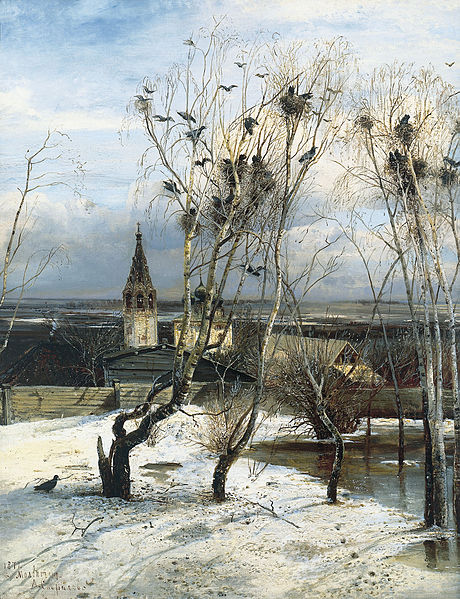 Russian Impressionist painter Alexei Kondratyevich Savrasov was born on May 24, 1830. He was a landscape painter that created the style called “mood landscape” or “lyrical landscape.” He was the son of a merchant.By the time he reached the age of 12 the young Savrasov was already doing watercolor landscapes and gouache that street vendors happily bought. While he showed exceptional talent, his father wanted him to be a merchant just like him. He enrolled at the Moscow School of Painting, Sculpture and Architecture in 1844. He had to quit school due to his father and because he was worried for his mother’s health. After four years he was able to resume his studies due to the combined efforts of his art professors and several philanthropists who provided support because they recognized his talents. His professor was the noted German landscape artist, Professor Carl Wilhelm von Rabus, and Savrasov became the school’s most outstanding landscape painter.

He was sent to Odessa, Ukraine by art patron Likhachev in 1849 to paint the local landscape. The school recognized the paintings he did of the local scenes in the Ukraine, awarding him with a certificate of appreciation. He finally graduated from the art academy in 1850.

He relocated to St. Petersburg in 1854 on the invitation of the president of the Russian Academy of Arts, Grand Duchess Maria Nilkolayevna. She commissioned several paintings from the artist, who stayed near the Gulf of Finland. Since the scenery was alien to him, Savrasov had to innovate, which made his paintings quite different from the academic style of painting landscapes. The “Seashore in the Neighborhood of Oranienbaum” and “View in the Neighborhood of Oranienbaum” were two of the works he created at the gulf coast that were exhibited at the Academy of Arts. These paintings gathered widespread attention and for which the title of Fellow of the Academy was granted to him.

Savrasov came back to Moscow in 1855 and was part of the exhibitions at his alma mater and later took over the landscape classes of his departed master, Professor Rabus.Savrasov was a natural teacher and it showed in how his students and fellow teachers responded to him. Konstantin Korovin and Isaac Levitan were his most outstanding students. Both of them remembered him with gratitude and admiration.

At age 27, Savrasov was already married. He and his wife, Sophia Karlovna Hertz often entertained several art collectors and artists. One of them was Vasily Perov, a close friend of Savrasov and the two enjoyed painting together. Savrasov painted the landscape in Perov’s painting called the “Bird Catcher and Hunters on Bivouac” while Perov painted the figures in Savrasov’s painting, “Volga near Yuryevets.”

Savrasov went overseas to Paris, Leipzig, Dresden, Berlin, Copenhagen, Switzerland and England in 1862 and saw some of the works of other prominent painters outside of Russia. He also attended the International Exhibition in Munich and was amazed at the advancement of art in other countries. He was so moved and influenced by the works of Alexandre Calame of Switzerland and John Constable of England. In the mid-1860s his most famous work was “Elk Island” for which he won first prize from the Art Amateurs’ Society of Moscow.

The high point of Savrasov’s career, according to many critics was around 1871 when he painted “The Rooks Have Come Back.” It showed nature in between winter and spring, when the still-bare trees and the light snow did not prevent the birds from returning to their homes, building nests among the branches of trees still devoid of leaves. Critics defined the artist’s style as mood or lyrical landscape. 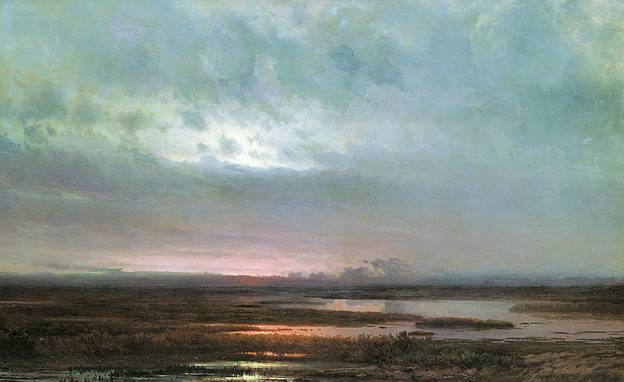 Savrasov helped publish a drawing textbook in 1869, making sure that instructions on how to paint Russian landscape, villages and cottages were meticulously presented in great detail.

Much like the French Impressionist painters who broke away from the traditional academic style favored by the Paris Salon, Savrasov joined the Peredvizhniki group of realist painters in Russia who protested the academic restrictions. The group later turned into the Society for Traveling Art Exhibitions. When he and his wife moved to a place quite close to the Volga River, he had more chances to paint en plein air. He produced several fine landscapes, including “Sea of Mud,”“Landscape with a Rainbow,”“A Provincial Cottage. Spring,”“View of the Moscow Kremlin,” and “A Winter Road.”

The death of his daughter in 1871 deeply affected him and turned him almost into a recluse. It was the year that he painted his most famous work. Afterwards, his style changed, and he painted with optimism and hope, creating colorful and bright spring landscapes. But it did not last long, as he was unable to forget his child, turning him into an alcoholic. His productivity declined, hampered by failing eyesight and lived his last years as a pauper.