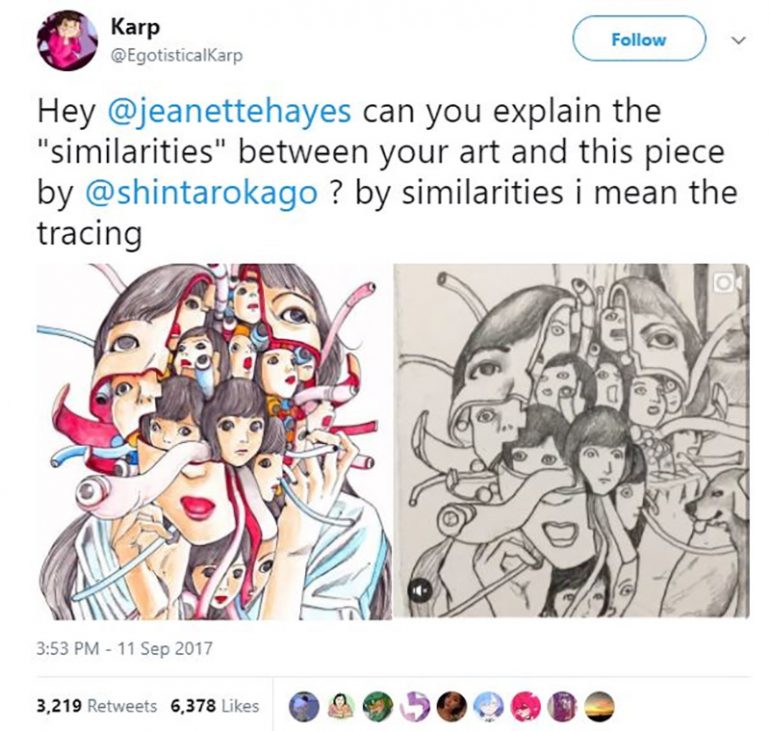 Jeanette Hayes is being talked about once again in Twitter, being picked up by some personalities and anime accounts with a huge number of followers. So in the end the matter did balloon up and a huge number of people are really calling her out on a number of things: tracing, stealing art, cultural appropriation, and white privilege.

Now the last two things are utterly nonsensical: cultural appropriation is the left-wing term for “cultural gatekeeping” which prevents the open sharing of culture that’s necessary in art, as we have seen in history with the rise of Russian’s Muscovite art movement from the seeds that was the Byzantine art or the propagation of Hellenism, that came from Greece, through the Silk Road and transforming Buddhist art. Without the open sharing of culture and ideas art wouldn’t have evolved into the way it was. If this was a thing in the past, a lot of things wouldn’t have existed today, such as cameras and photography (which was “France’s gift to the world”) or anime and manga (which came to Japan from the West).

White privilege is another nonsensical racist leftist term to demean present white people into a sense of “white guilt” for things in the past that they were not at fault for by saying they have certain privileges that’s rooted in the West’s racist history and it gives them advantage over non-Whites. The argument used against Hayes is that she’s white and thus, she wouldn’t be punished for stealing art from other artist.

As for stealing art, well, this is more complicated. The thing is that US laws have always ensured that there is such a way for people to use or derive from other people’s works for your own. It is called Fair Use and it’s something that other countries also use as part of their copyright laws. Fair Use states that as long as the person has transformed the art (or whatever that’s being copied) in such a way that visibly different it’s okay and that person has not infringed on any copyright law. But is her work really Fair Use?

For example: this post by Twitter user @EgotisticalKarp displays a comparison between Shintaro Kago’s art on the right and the copy Jeanette Hayes used on the left for her work “Jeanetteically Modified.” We see a lot of similarities, but also differences.The law of Fair Use states that there needs to be enough differences for the art to be transformative or a parody. But how much difference is needed for it to be transformative.

So it seems that the work must have an “alternate meaning or purpose” from the original or that it has to be a criticism of the copied work (as a parody). Looking at Hayes work, we see that the part of Kago’s art is just a part of a larger work. It isn’t a parody, though the meaning behind Kago and Hayes’ works maybe quite different. 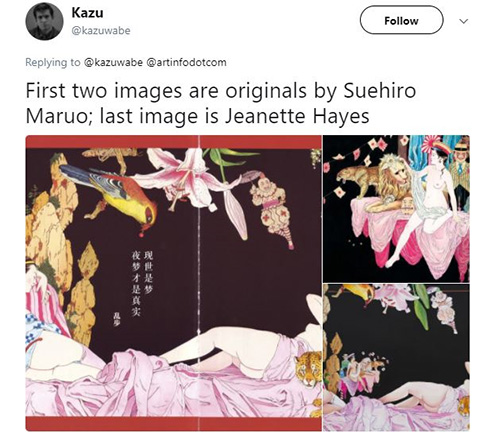 Another work that’s criticized is one that’s a mashup of two of Suehiro Maruo’s work, posted by Twitter user @kazuwabe in a comparison tweet. In the image we see Hayes just attached the second image at the end of the trailing rock formations of the first image. This also might have a different meaning than the original, even if it’s a glaringly blatant copying like the case with Kago’s work.

Both works have differences in some ways. So it would fall under a court’s ruling if the works fall under Fair Use. Sometimes some parts of the law are held up to be more important than the others. An example: the art can be so exact it’s a 1:1 copy, but it is used for parodic purposes or it is being criticized, then it would fall under fair use.

And finally, tracing. But then who can even deny it? Both works mentioned above, though they have difference from the original, seem to have been traced. The differences can be argued to be ones usually made when someone traces an image’s outlines.

As of this writing Jeanette hayes has locked her account but there were 11 new tweets about her calling her a thief, a hack, an asshole and a plagiarist. She’s treading on hot coals here. If someone she copied actually filed a complaint or sue her, there is a chance she might lose. And if she loses it would be a big blow to her as an artist. Is she really a talentless hack? Maybe. But was her work legal? Probably, probably not. We’ll need to see someone file a case against her first. Copyright laws are tricky and condemning and is strange to find people who would even bother making any art that might put them in its crosshairs.

Featured and 1st image by The first of many tweets calling out Hayes, by @Egotistical Karp, via Twitter