When one has no standards, one tends to create nothing but chaos and chaos is ugly. The opposite of what art should stand for. But modern definitions of art says that anything anyone finds beautiful can be called art. This is, in fact, a very dangerous manner of thinking, for the sickest of all minds can consider the most grotesque things in the world as something beautiful and be called art. When nothing regulates the things people want to express, they will tend to express things no civilized person should be allowed to. And it would be even more serious if that person is given the chance to express himself in that manner by using taxpayer’s money.

Consider the following events that has happened recently in Brazil: Brazil is a country that’s very conservative. Just like all Christian Nations that were under the Spanish colonial rule, people take the teachings of God seriously. It was this religious wall that Santander Bank found themselves to have slammed into when it decided to host the “Queermuseu” (Queer Museum) in its cultural center in Porto Alegre. Protesters from the Free Brazil Movement, which is supported by evangelical Christians, has accused the exhibit of promoting bestiality, pedophilia, and blasphemy against God. The charges were denied by the curators.

The Free Brazil Movement is a right-wing, conservative movement. So, naturally, you can see why they would protest against such an exhibit. Especially if it is one that’s being funded by tax money.

Kim Kataguiri, a leader in the movement, explained it in an interview with The Guardian: “We did the boycott because the exhibition involved public money in the promotion of bestiality, paedophilia and offences to the Christian faith.” She has reason to be concerned: performance artist Wagner Schwartz was filmed with a child touching his finger, ankle and foot while naked in a work he calls “La La Bete” only a few weeks later. Protests were also aimed at the Museum of Modern Art after the film got out but the museum continued the performance. The curators, however, were summoned by the Brazilian senate for an inquiry. 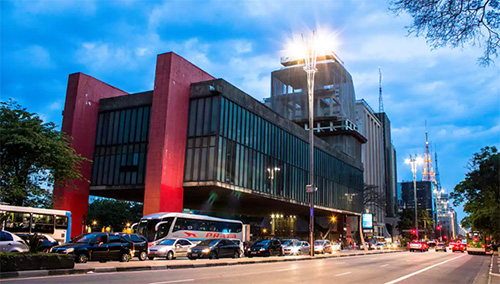 Later on artists would protest in front of the Sao Paulo Museum of Art against the growing censorship and homophobic violence as the museum launches its current exhibit: Histories of Sexuality. Alessandra Almeida, one of the protesters, said: “Censorship is a form of repression. This radical, moralist, Christian right gained strength in congress and the left did not pay attention.” The exhibit first only allowed those above 18 to enter, then minors were eventually allowed, provided they’re accompanied by a guardian. Of course, the liberal left has accused the right-wing of homophobia and being bigots.

He’s right. David is a presentation of a nude man made out of stone. Sculpture and painting challenges the artist to recreate beauty on a material that cannot express itself, a slab of marble or a blank canvas that does not have any emotion whatsoever. La La Bete was just some guy taking off his clothes for everyone to see. There is no challenge or message in that. Still the Brazilian left defended it. They even started using the same buzzwords we see in US politics, like “Nazi” against the right-wing.

Art in the West has become so horrible, the only sanctuary of beauty in it remains in the past. Now the rest of the world is slowly becoming infected with that same terrible style that’s low-effort and very dubious of motivations. As Marco Feliciano, a Brazilian lawmaker, put it: “This modern art today is very weird.”

Featured and 1st image by One of the protesters in Brazil’s Art Wars, via The Guardian

2nd image by The Sao Paulo Museum of Art, via The Guardian