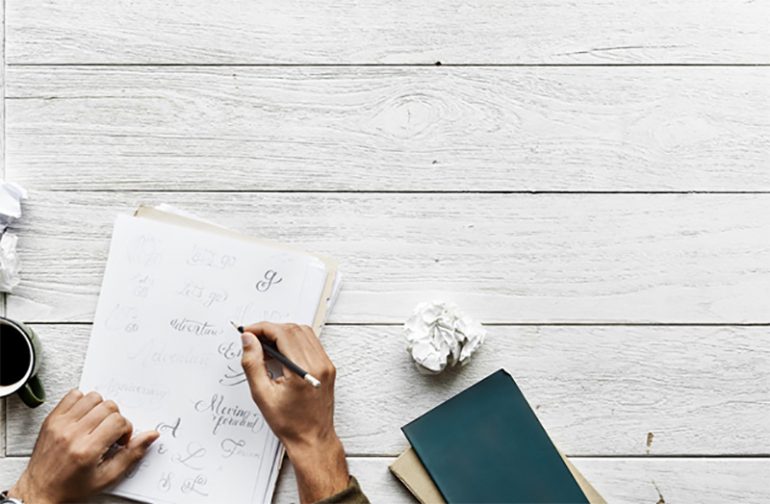 “The art of beautiful handwriting,” also known as Calligraphy, has been growing as a trend most especially among social media platforms. The calligraphy that everyone is familiar with is the one where a brush pen and a bottle of ink are used to produce wonderful words of art. Over the years, its definition has evolved and adapted to new technologies.

Looking Back at the Past and Present of Calligraphy

The word calligraphy is derived from the Greek word “kallos” which means “beauty” and “graphein” which means “to write.” Putting together these two words makes “calligraphy” literally mean “the art of beautiful handwriting.”

It has been used by many countries but for the same purpose, to write books, letters or notes. Ever since then, calligraphy has grown to be more than just a “beautiful writing style.” It has become a visual art that can be branched out to different categories, which includes lettering and creative typography. Not many are aware of the differences between these three styles, not even all artists!

Interestingly, calligraphy was a norm in the past and probably not as appreciated as it is now. Calligraphy now holds value in the field of fine arts. More than just handwriting, it is what holds the emotions and feelings of the writer and can be interpreted by the readers.

The execution of calligraphy is different from lettering and typography because the tools needed are simply a bottle of ink and a writing tool. The writing tool can vary according to its origin. In Asian countries, brush pens were used traditionally, while western countries used a fountain pen or dip pens. Nevertheless, they all are used the same way, dipping the tool into the bottle of ink to write.

This type of method can be done by almost anyone and it doesn’t always have to be those pretty types! Unlike calligraphy, this style makes use of more writing tools ranging from a simple pencil to colored markers. Rather than writing right away, sketching is done. Almost as if you are drawing letters like they are subjects. With this style, there is more freedom in styling the appearances of each word. The use of colors is relatively easier to do.

For this last method, it might sound a bit more intimidating for some as it sounds almost very technical, which is almost true. Another reason for this intimidation may also be due to the fact that it is more talked about by Graphic Designers or those of the relating field.

Typography is also a popular trend since 2018 as it becomes high in demand for graphic design. Artists and designers use this to express creativity in the arranging of typefaces, their spacing, and sizes in order to produce good art and design. While adding so, the importance of readability is being maintained.

These three methods are different in the way they are executed but they appear the same in the end. It is also up to you to find which of these methods works best for you. Now, why don’t you put your gadget down and try one of these out?