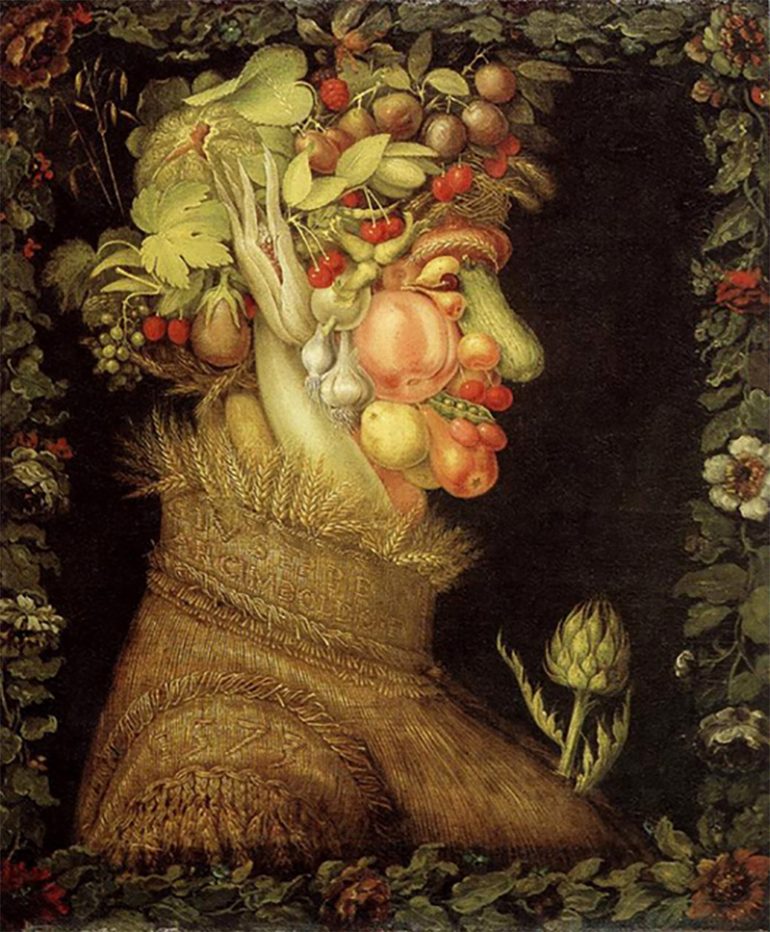 Not all of the Old Masters are what you’d call “normal people.” Some lived very eccentric lives, usually due to the circumstances of the era and country they live in. Some has very eccentric art styles, such as that of Giuseppe Arcimboldo. What sets him apart from the other artists is that he tries to express the human form by painting vegetables.

If ever you found children drawing fruits or other inanimate objects to represent a human face or a human body then you’re already introduced to Giuseppe’s unique style of art, for indeed he does practically the same thing, but with the mastery and skill that professionals of his calibre can offer.

He was born in Milan, Italy, in the year 1549 to a painter, Biagio Arcimboldo.Giuseppe used to write their family name as Arcimboldi. This is probably a regional name difference and Giuseppe would use the two names depending on where he is. According to Father F. Paolo Morigia, Giuseppe told him that the Arcimboldo family was a descendant of a German noble named Saitfrid Arcimboldi, who was under the service of Charlemagne. Saitfrid had 16 children, 3 of which were also ennobled. One of the three children eventually moved into Italy and established the Italian lineage.

His eccentricity is blamed on his great uncle, Gianangelo, who is said to have introduced the young Giuseppe to “artists, scholars, writers” and other important people who would visit their house. Gianangelo was the Archbishop of Milan until 1555.

Giuseppe’s childhood remains a mystery to this day. All we know that he must have developed his skills as an artist at a very young age, like most children of artists do. It was said that little Giuseppe was influenced by Leonardo Da Vinci through his sketchbooks. These sketchbooks were left by the great artist to his student, Bernardo Luini. Luini’s son had apparently showed the sketchbooks to the young Giuseppe.

When he was 22 years old he started designing stained glass windows for the Milan Cathedral together with his father. Two years later, he worked and painted five coat of arms for Ferdinand of Bohemia. In 1556, he was tasked to create frescoes for the Monza Cathedral together with another artist, Giuseppe Meda. In 1558 he did a series of sketches for the Dormition of the Virgin Mary. 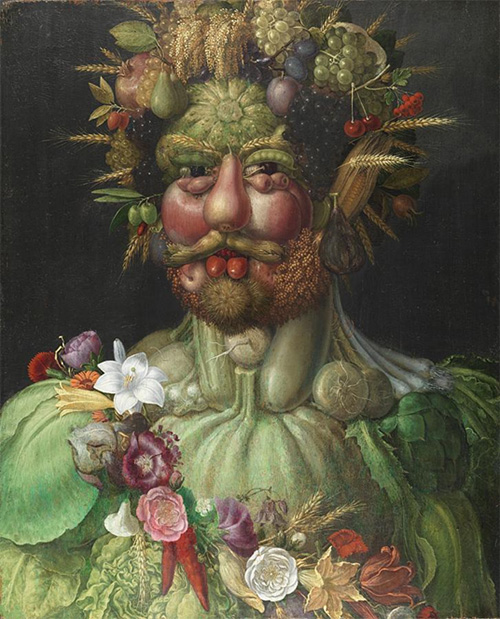 In 1562 he moved to Austria and became part of Emperor Ferdinand I court as his portraitist. According to the Historia dell’Antichitd di Milano “he (Arcimboldo) left his country and joined the Emperor’s court, where he was liked and treated well (by the Emperor) and received with great kindness, and the Emperor gave him a good salary worthy of his merits and also showed his affection in many other ways.” So much was he in the favor of people around him that Ferdinand’s son, Maximillian II, also sees him in good favor and Ferdinand’s grandson, Rudolf II, was very reluctant to let one of the most trusted and favored people of the court of the House of Habsburgs go back to his home country after being in their service for 26 years. Eventually, he let him go after being pestered by Giuseppe for two years. It was during at the time of his service to the House of Habsburgs that he developed the painting genre where he’ll arrange animals of inanimate objects in such a way that they’ll form a human face and likeness. He produced two series of work using this style: The Four Seasons and four other works that are each named like the four ancient elements: Earth, Fire, Air, and Water. After Giuseppe and his patrons have all died, many of his other works were lost or have been forgotten.

So Giuseppe was able to return to Milan on 1587, but while retired he remained in touch with the Emperor. In 1590 he produced his final work: Vertumnus. He painted the Emperor as a bunch of edibles and flowers. Finally on 1593, at the age of 66, Giuseppe, the favored portraitist and innovative eccentric of the Habsburgs, departed from this world.

Featured and 1st image by Winter, via all-art.org

2nd image by Vertumnus, the final work of Giuseppe Arcimboldo, via all-art.org