The harlequins sprinkled throughout the painting

Picasso was more than willing to work on his trademark motifs and he was successful to hide harlequins throughout his composition. The harlequins are quite hard to find as they are hidden beneath the surface of the painting and lie behind other images. The largest one can be found in the middle which sheds a diamond like tear. The rest can be best viewed if you are on a certain angle.

Harlequins are commonly associated with the underworld in mythology which may signify death and destruction in his painting.

Every tongue is a knife

Out of three images that displayed their tongues, the crying mother, the horse and the bull, none of them had a rounded tongue. Their tongues are showed to bear a dagger-like point, similar to a knife. This embodies the normal figures sharpened by the horrors of Franco’s atrocious act.

The dove symbolizes the end of peace

The dove is obscured by darkness and a lot smaller than any other images on the painting. The dove is often associated with peace and seeing its pained expression and broken body, it suggests that peace is over and it has been destroyed. However, there is a slight gash of light which may suggest that there is still something good about the war.

The woman holding a kerosene lamp is the Soviet Russia 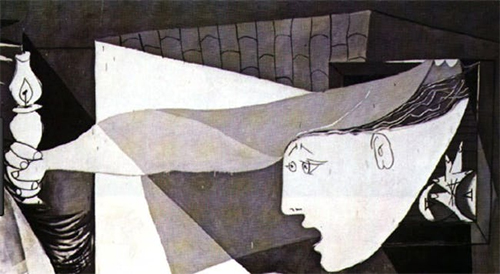 If you will pay close attention to the woman holding the lamp, you will see five prolonged shape next to the crescent shape window. This symbolizes the Communist star, sickle and hammer. It was displayed on the Soviet Union’s flag which may depict that the woman holding the lamp is Russia as they are considered to be an ally of the Guernican people.

The horse’s leg hides a bull

Another figure made from fragments is another bull’s head between the legs of a dying horse. It is positioned below the belly of the horse with its horns thrusting upwards. For Picasso, bullfighting had a sexual and violent association. By referencing a sport that is tied up with Spanish history, sexuality and masculinity n the death-plagued composition, Picasso allowed several different interpretations. But since the bull represents fascism and the horse symbolizes the citizens of Guernica, the image can be seen as the fascist regime harming the Guernican.

The trio of women has many possible meanings

The trio of the tightly grouped women on the right side offered different interpretations. It can represent the 3 fates of Greek or Roman mythology that controlled life and death. With the torch in one hand, it may also be seen as the Liberty Leading the people. The three martyred virgins of Christianity can also be another reading.

Positioned close enough to the soldier’s head, the horseshoe suggests the sacred crescent of Islam. Picasso may have shown his fear of the invasion of Moroccan troops in the region.

Featured and 1st image from http://www.nationmultimedia.com/detail/art/30334178