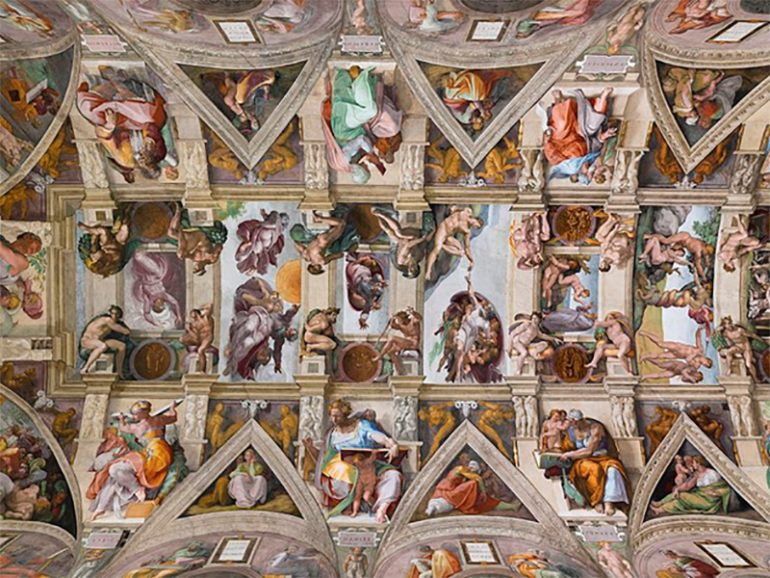 One of the most influential works of art for all time is the painting on the Sistine Chapel ceiling. It was Michelangelo’s masterpiece as a painter. It was also a foundation of the works of art of the Renaissance period. It was no mean feat as the frescoes were painted directly on the ceiling, which used to be adorned by pale blue paint and some golden stars.

The painting on the Sistine Chapel depicts major scenes from the Old Testament, particularly the Book of Genesis. Unveiled in 1512, the painting contained complex narratives. The human figures were skillfully painted. It is one of the most impressive works of art and pilgrims and tourists come to visit it annually. About 25,000 visitors come to see it daily. Annually, about five million people come to view it.

Impressive as it is, covering 12,000 sq. ft. (1,110 sq. m), the painting also contain what many think are secret messages and codes and Michelangelo thumbing his nose at the religious personalities during his time, with cleverly disguised images. There are also many facts pertaining to the masterpiece.

The painting of the ceiling was commissioned by Pope Julius II in 1508. He wanted a project that will be a highlight of his reign as Pope, increase his social standing and have one up his rival, Pope Alexander VI.

About 5,000 square feet of frescoes cover the Sistine Chapel Ceiling. The painting covers scenes from the creation of man to the fall of men after the flood. On either side of the scenes are huge portraits of sibyls and prophets that heralded the coming of the Savior. Tragic stories about ancient Israel, the ancestors of Jesus, nudes (ignites); cherubs and other figures are also included. Overall, there are 300 figures on the ceiling alone.

Pope Julius II had to promise Michelangelo that he would sculpt 40 huge figures for the pope’s tomb before the artist accepted the commission. Because Michelangelo preferred to sculpt, he had to learn the craft of creating frescoes while he worked, including mastering difficult perspectives, in order for the figures to look correct when viewed 60 feet from the ground.

It took him four years to finish the job, and he had to construct his own curved scaffolding, following the curvature of the ceiling, to enable him to work uninterrupted. Contrary to popular belief he did not paint the ceiling lying down. He and his assistants were standing while painting although they were unable to view the work due to their proximity to the ceiling. Michelangelo only saw his entire work during its unveiling. All the credit goes to Michelangelo though because his assistants were only there to fix things and mix his paints while very few were entrusted to actually do some painting of minor objects.

Sensitive parts of the nudes were later covered with swatches of cloth and fig leaves on the orders of Pope Pius IV. One of the students of Michelangelo, Daniele da Volterra, was hired to do the work. Most of these have been removed during the restoration of the painting in the 1980s-1990s. 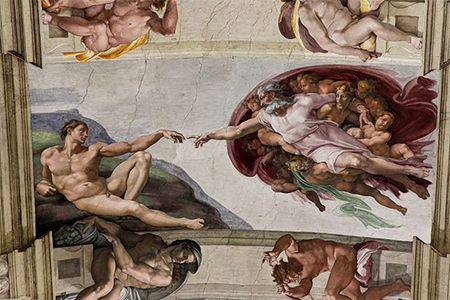 There are many interesting things written about the creation of Michelangelo’s masterpiece. Michelangelo, Leonardo da Vinci and other prominent artists learned more about human anatomy by dissecting corpses. Michelangelo started it when he was 18.

In fact not only art historians and critics found some messages and creative methods to depict human parts, but also many doctors of medicine.

For example, in the depiction of “God Creating Adam,” doctors said that it was a perfect anatomical cross section illustration of a human brain. Physician Frank Meshberger said that the artist had God surrounded with a shroud that depicted the human brain as if Adam was not only being endowed with life but also high intelligence.

In the panel for “The Separation of Light from Darkness” neuroanatomy experts Rafael Tamargo and Ian Suk found another anatomical rendition. From the angle of God’s head, from his chin and jaw line to his throat and center of his chest, the researchers discovered that it was not an anomaly in painting, as the light was coming from somewhere else that is discordant with the rest of the painting. They said that it’s an accurate painting of the brain stem and human spinal cord.

Moreover, the roll of fabric at the middle of the robe is meant to be a human spinal cord, coming from the brain stem shown at the neck. At the waist, the twist of the robe represents the precise drawing of the optic nerves coming from two eyes.

In the depiction of Saint Bartholomew holding his own skin, the human’s head is said to be the portrait of Michelangelo himself.

In the panel showing The Separation of Light and Water, God’s mantle clearly depicts the bisected view of a human’s right kidney.

Some of the beams in the ceiling were only realistic depictions of actual beams, tricking the eye to see them as real architectural details

Biagio da Cesena, Pope Julius II’s master of ceremonies openly criticized Michelangelo for showing nudes in the painting. In retaliation, the artist painted him as Minos, with large ass ears and his gentalia being swallowed by a serpent in the panel depicting The Last Judgment. He can be seen at the bottom right of the painting.

Featured and 1st image by 2.5</a>], <a href=”https://commons.wikimedia.org/wiki/File%3ALightmatter_Sistine_Chapel_ceiling.jpg”>via Wikimedia Commons</a>