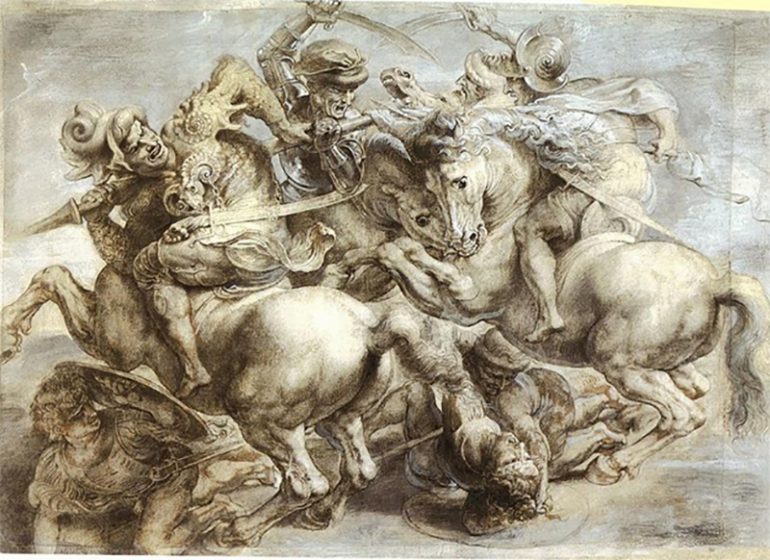 “The Battle of Anghiari,” is a mural by Leonardo da Vinci. Many art historians call it as “The Lost Leonardo.” It is a lost painting, but studies for the mural have survived. The most faithful and best known copy of this mural by the great master is the one depicted above, created by Peter Paul Rubens.

The center scene of the mural showed three fierce soldiers riding tempestuous war horses. Each one of the soldiers was fighting to win a standard (banner).

It was one of the most ambitious projects of Leonardo da Vinci and could have been the largest, at 54ft by 21ft or 16.7 by 6m. He thought of using a new type of plaster for the mural. But it created many problems for him. The weather did not cooperate and humidity turned the paste holding his cartoon onto the wall into liquid. His cartoon fell to the floor and tore into pieces.

Da Vinci did not foresee that the humidity would have disastrous results. He did a trial run for the new type of plaster. He applied it to a board and it dried well under warm temperature. He followed the instructions in the book, which showed that it would provide a very good stable base for the oil paints. Leonardo da Vinci even built a special accordion-type scaffolding that can be lowered or raised so he can be lifted to the right height to reach the upper parts of the mural.

Michelangelo, Da Vinci’s long-time rival, was also commissioned to decorate the opposite wall. He decided to feature one episode from the Battle of Cascina, which showed a group of soldiers who were bathing, caught by surprise by oncoming enemies. Michelangelo failed to finish his mural as he was called back to Rome by Pope Julius II to build a tomb for the pope.

Several museums have the studies created by Leonardo da Vinci for the mural. If it were finished, it would have been the greatest and largest work of the master. From the cartoons that he made and partof the original sketches that were left on the wall, the interest of the great painter in anatomy, action, atmospheric effects, movement and drama were clearly seen. 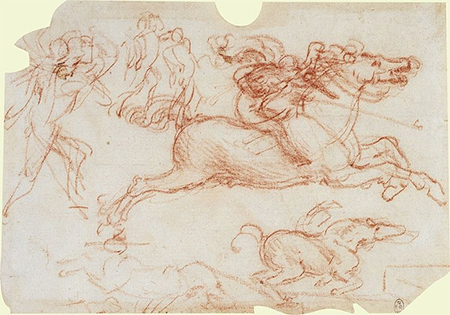 The incomplete mural was thought to be lost although many still believe that the painting is hidden behind a counter wall at the original location. He started creating the cartoon in 1503 and it remained incomplete. He began to paint it on the wall in 1505 and was able to finish the main scene before he was called back to Milan. He never came back to finish the mural.

Those who originally saw the central focus of the painting were highly impressed by Da Vinci’s talent. Several copies were made by other artists. The most acclaimed was the complete painting of the central scene done by Rubens. It was concluded that Rubens probably referred to a middling engraving. It was because there were several inaccuracies in his work. Otherwise, it’s a dynamic and powerful rendition depicting the passion, inventiveness, creativity and rhythm of one of the greatest painters of all time.

Sometime between 1570 and 1571, Giorgio Vasari either covered or destroyed The Battle of Anghiari during the redecoration and renovation of the Vecchio Palace.

In March 2012, Italian art diagnostician Maurizio Seracini announced that he believed the lost painting of The Battle of Anghiari might be hidden behind the mural of Vasari entitled Battle of Marciano in Val di Chiana. It was said that about 12 meters from the ground, in the upper part of the fresco, there is a Florentine soldier waving a green flag. On the flag, “Cerca trova” or “He who seeks, finds” was written. The scientist believes that is was a hint from Giorgio Vasari, who had praised the unfinished mural of Da Vinci.

Seracini thinks that it is not possible that Vasari would destroy the work of the master and he might have preserved and concealed it by another painting. Using non-invasive techniques, they drilled small holes in the restored part of the Vasari mural. They discovered a curtain wall built in front of the wall where the original Da Vinci mural used to be. Sensors revealed that there is a 1 to 3 centimeters gap between the original and the curtain wall, which they believed is enough to preserve Da Vinci’s fresco. Bits of paint collected showed that they were the same as the paints used in Mona Lisa.

Alas, lack of funding and disagreements about how to proceed with the investigation put a stop to it. Who knows, the future generation might be able to see this lost masterpiece once again.