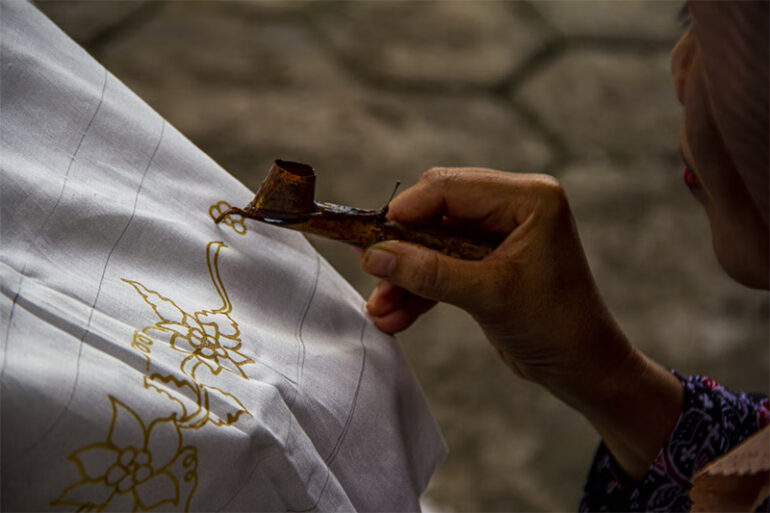 The art of batik is a centuries-old tradition that Indonesians still practice today. The exquisite textile designs are defined by their unique production process, vibrancy, and crackled aesthetics.

Batik craftmanship originated from the island of Java in the 13th century, which then flourished as a result of enhanced trade routes across China, the Middle East, India, and Europe in the 17th century. While the dyeing technique is similar across different regions, the design, texture, and patterns reflect the unique beauty of their respective culture and traditions.

Batik is inarguably one of the most colorful forms of functional textile art and modern fashion design in Indonesia Let’s look at some of Indonesia’s most elegant and iconic batik designs and the enchanting stories behind them. Learning the meaning behind each glorious pattern will give you an insight into the culture and people unique to Indonesia.

One of the choice batik patterns among royals during the reign of the Yogyakarta Sultanate in the 18th century, Kawung is a stunning and elaborate depiction of the fruit-bearing areca palm tree. According to legends, the kawung batik was so much of a hit among the royal family that only the nobility was allowed to use the pattern in the design and creation of royal garments.

Regarded as a sacred symbol of authority, protection and security, parang is another famous batik geometric pattern that remains famous in present-day Indonesia. It is characterized by a narrow symbol resembling a sword or the letter S. It first appeared in Central Java during the 16th century and was designed by a certain Danang Sutawijaya.

The sekar jagad is a popular batik design among couples about to join hands in marriage. Its meaning lies in the vibrancy of its colors and the diversity of its flower print. The exquisite designs are divided into islands featuring individual designs, such as mountains, flowers, rain, animals, and many more. The unique motifs in the sekar jagad version of Surakarta also indicate the socioeconomic position of its wearer.

One of the most famous traditional batik designs from Surakarta is the truntum which symbolizes reawakened love. It was created by Gusto Kanjeng Ratu Kencana, the wife of the King. As a means to heal her pain and sadness from the King’s infidelity, the queen spent most of her time contemplating and creating batik art. Inspired by the beauty of the local tanjong flowers, she created the truntum batik design, which helped bring back the King’s loyalty and undivided love for her. In modern times, the truntum batik is one of the most popular designs for engaged couples.

For Indonesians, batik is not only an art form but a means to pass down folk tales and valuable lessons through generations. It’s an integral part of Indonesian culture, so much so that they celebrate Batik Day every October 2 to commemorate its immense cultural value to almost 300 million people. The rich colors and patterns of batik narrate the history and spirituality which bind its people while preserving their sense of pride as a nation. This uniquely authentic textile art showcases the ingenuity, craftsmanship, of innovation of Indonesians, then and now.

1st and featured image by https://unsplash.com/photos/8Bg8N8HtiWI