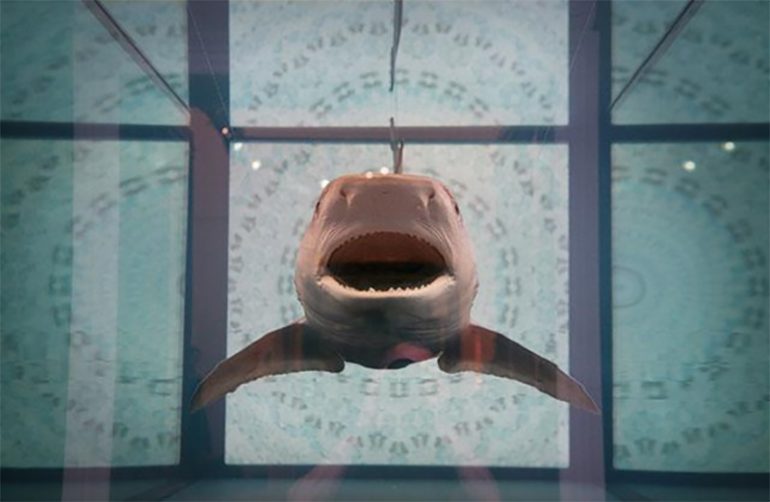 Hirst is probably the only guy who would consider tossing a dead animal into a tank (in this case, a dead shark), give it a title about how living people can’t imagine the concept of death (or at least refuse to think of it) or other edgy titles art hipsters might like, call it “art,” and make lots of money out of it. It is probably the most surreal art piece there is right now since it’s literally just a decaying shark put in a tub of formaldehyde. It was once owned by a guy named Charles Saatchi who, according to history, offered Hirst to pay for any artwork he wanted to create in 1991. The whole piece cost about $67,500 to be created. He sold the piece in 2004 to a Stephen Cohen for about $8 million according to some, $12 million according to others. Whatever the real price was, it caught a lot of attention.

Hirst’s art always seems to invoke some kind of feeling from people, like it was made for a niche audience that likes to invoke emotions of any kind. The shark, the passion of Christ (with some nudity and cow heads), dead animals, and butterfly wings are just some of the examples things he worked with and it all just seems to get weirder and weirder. And then there’s a huge anatomy doll, a pharmacy, art with colored dots and skateboards. He has a lot of fans because of this, but he also has his share of critics, especially when it comes to his slight obsession of soaking things in formaldehyde.

His latest exhibit as of this writing features fake treasures from under the sea. They’re all fakes, the people can tell, some said they were very poor and bland fakes. And yet some of the visitors actually liked it. The exhibit received mixed reviews, which may or may not be actually intended by the weird artist. 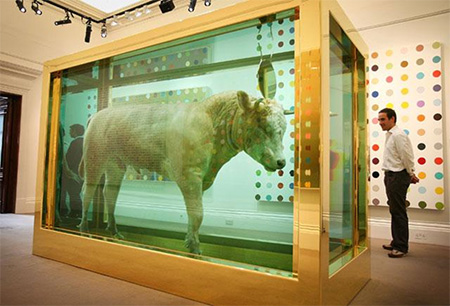 As an entrepreneur, though, he seems pretty well informed about how the art world runs as a business. All his know-how in the business part seems to be an influence of Charles Saatchi. Hirst once said that Saatchi seems to think that he can affect the value of an artwork with his money. A notion that might sound offending from an artist’s viewpoint, but when seen on business standpoint, it makes sense. In fact this seems to be the idea when Hirst started buying back the art pieces he created when Saatchi started selling them off because their relationship broke down for some reason. This might also be the idea that can explain why Hirst bought his own artwork, For The Love of God, which is a skull made with platinum and encrusted with diamonds. The work cost more than $18 million, some say $27 million, to create, and he bought it for $100 million. Things like this is pretty common in the business world where companies would buy their own stocks to boost their stock prices. At one time, in 2008, he took his works straight to the auction to sell and made a whopping $198 million. The works sold range from sculptures of animals with gold parts, more animals soaked in formaldehyde (there’s a zebra and a shark), and a statue.

So what is he really? A genius in art and business that likes to break the rules, or just a plain weirdo that has a knack at finding an audience for his weird works and getting a lot of cash from the suckers? We may never know until Hirst writes a biography. But one thing’s for sure, though: whatever Hirst is doing is working well for him. And we’re probably going to see more of him, whether it involves fakes or animals in formaldehyde.

Featured and 1st image by A Damien Hirst work in all it’s forlmaldehyde glory, <a href=”http://www.independent.co.uk/arts-entertainment/art/news/a-formaldehyde-frenzy-as-buyers-snap-up-hirst-works-931979.html#gallery“>via the Independent</a>