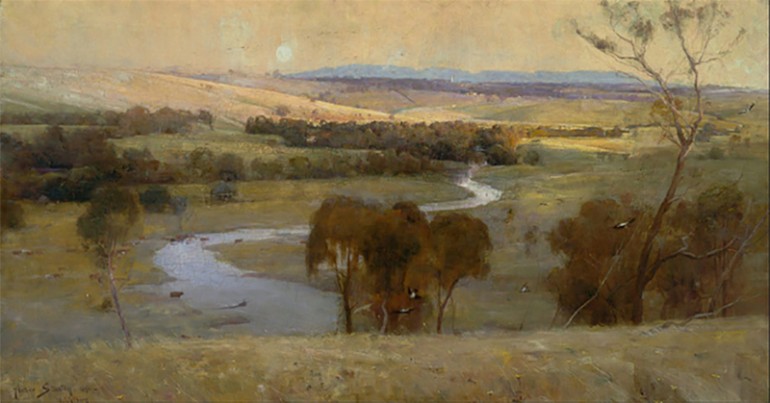 Sir Arthur Ernest Streeton who was born on April 8, 1867 in Duneed, Victoria, was considered as one of the leading members of the Impressionism in Australia, which was also called the Heidelberg School. Streeton was a great landscape painter. His family later moved to Richmond when he was seven years old. He started his art studies at the National Gallery School under George Frederick Folingsby in 1882 at the age of 15 and held his first exhibition at the Victorian Academy of Art at age 18.

Streeton was well-known for his iconic and evocative landscapes that superbly captured the very distinctive color and light of the Australian outback and countryside. Although he received formal art education, much of the knowledge he had about oil painting and techniques he learned by himself, mainly depending on books such as ‘Talk About Art’ that was written by William Morris Hunt. The author commended the techniques of the Barbizon artists such as Camille Corot and Jean-Francois Millet. His major influences were the works of the French Impressionists and JMW Turner, particularly in their approach to light and their loose brushwork and the fact that they were painting en plein air. Together with his fellow artists from the Heidelberg School such as Tom Roberts and Fred McCubbin, they painted around Melbourne, particularly in the Yarra, Heidelberg and Box hill and around Little Sirius Cove, Coogee Bay, Hawkesbury River and Richmond.

While mainly a landscape artist who produced such canvases as “The Purple Noon’s Transparent Might,” “The Railway Station, Redfern,” “Fire’s on Lapstone Tunnel,” “Spring” and “Still Glides the Stream,” Arthur Streeton also created several self-portraits and portraits. He made frequent trips and lengthy stays in England from 1900 to 1924. In 1918 he became an Official War Artist. Although he was not that successful overseas, his reputation in Australia was very solid, and he was considered one of the pioneers in depicting the remote areas in Australia.

Formation of the Heidelberg School 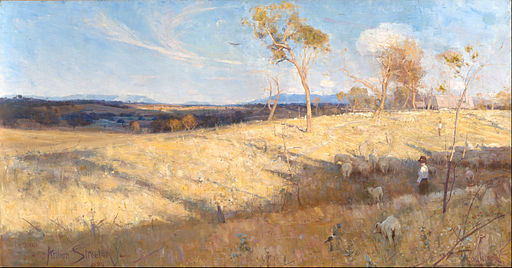 In 1886 Streeton and Tom Roberts met. Robert had just returned to Melbourne after his 3-year study at the Royal Academy in London. Roberts invited Streeton to join his group that was engaged in plein air painting, depicting Melbourne’s beautiful countryside as well as Mentone’s seaside.

Streeton was fascinated with the perspective, color, heat and light and was working hard on mastering them. At that time, Streeton was already formulating his high-keyed palette of light blues and golds, which he deemed as the basic color scheme for painting Australia’s landscape.

After he successfully sold two paintings, the “Pastoral” and “Settler’s Camp” he had more freedom to paint full time with the Heidelberg School group, which included John Mather, John Llewelyn Jones, Jane Sutherland, Clara Southern, Charles Conder and Fred McCubbin. A homestead at Eaglemont, that had vantage views of the Yarra Valley, which is close to Heidelberg became the main hub of the group, with the trio of Roberts, Conder and Streeton directly influencing the more formal establishment of the Heidelberg School.

It was not just French Impressionism that was taken up by the Heidelberg School. They were also influenced by realism and naturalism, which makes their work quite different from other Impressionist paintings. The color pigments the group used had a natural-looking tone and their compositions had a sense of form that was far different from the compositions of the French, such as Pissarro, Renoir and Monet.

The group had their first exhibition at the Buxton’s Art Gallery in Melbourne in August 1889. The 9 by 5 Impression Exhibition was so named because many of the paintings used the wood lids of cigar boxes of that size. There were 183 pictures exhibited and 40 of them came from Streeton. It won the public’s appreciation but were criticized by a handful of reviewers and arts institutions did not give them that much support. It was because en plein air painting was also practiced in North America and Europe, although they finished their works in their studios. Like the French, the quick outdoor sketches of Australian Impressionists were already considered as finished works.

Breakup of the group

The group that was working at Eaglemont was broken in January 1890 as Conder went to Europe and Streeton moved to Sydney. Streeton created several canvases featuring the Blue Mountains, with “Fire’s On, Lapstone Tunnel” being his largest painting of the mountains. It featured the aftermath of a premature blast in the construction of a tunnel that Streeton witnessed. It became the symbol of progress and not-to-be-subdued nature of Australia, just like the paintings “Down on His Luck” by Fred McCubbin and “Shearing the Rams” by Tom Roberts.

Roberts and Streeton met up at Curlew Camp at Little Sirius Cove where they painted several pictures. This was where “The Railway Station, Redfern” that was considered as Streeton’s masterpiece, was created. The two also taught at their Pitt Street studio in Sydney. After 26 years touring Europe, Streeton returned to Australia in 1923 and was knighted in 1937 for his services to Australian fine art.