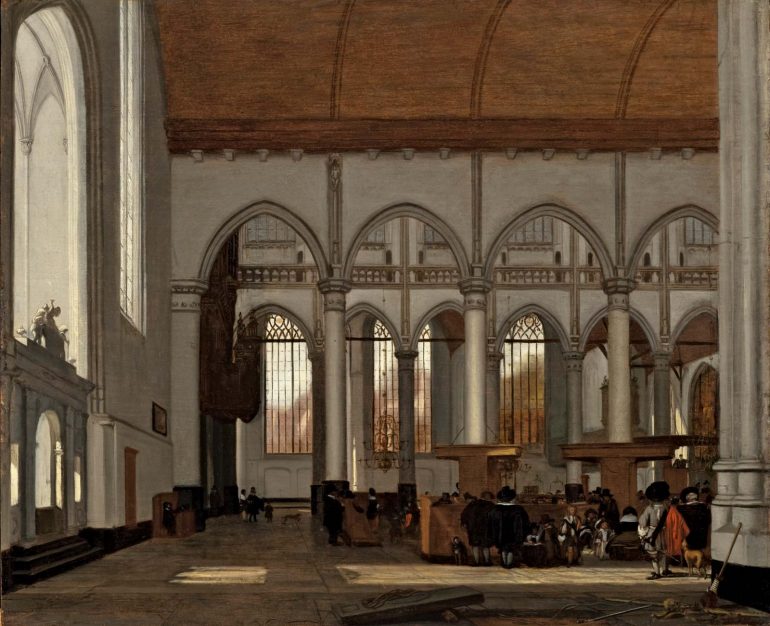 De Witte and his Art

Church interior art was a popular form of art during the Dutch Golden Age, of which de Witte was a part of. His devoted theme, which is Gothic churches, was the perfect subject when paired with his perfected skill in linear perspective, a technique that was said to have been pioneered by the Italian genius, Filippo Brunelleschi, more than 100 years before his time. He was also skilled in expressing light effects in his works, which was unique to him compared to older Dutch realists. His use of mellow colors and greys for his lighting has such a realistic effect that you can probably tell what time of day it was in his paintings.

Of course, his painting is always populated, showing off his genius all the more. Not that it’s hard to do for artists of his caliber, but when he paints them with such realism because you can definitely see the light shining on the people, it just gives off the feeling that you’re looking at an old photo, rather than a painting.

Born in 1615, De Witte grew up studying geometry under the teachings of his father, a schoolmaster. This mastery of geometry was to become the foundation, along with some training in arts, to his skill in perspective. When he has grown he eventually left his home to go to Delft, which according to historians, is where his art career all began. Here, he prioritized and mastered historic and portrait painting under the tutelage of Evert van Aelst. While there he also specialized in Protestant and mythological art. It was here when he painted “Vertumnus and Pomona.” After a while, he started showing interest in architectural painting. Artists, such as Hendrick Cornelisz and Gerard Houckgeest.

He moved to Amsterdam around 1652. It was here that his first wife died and he married a second woman, Lysbeth van der Plas. After a scandal where Lysbeth and his adolescent daughter (Lysbeth taught de Witte’s daughter how to steal and the two were caught), de Witte indentured himself to the Joris de Wijs, an Amsterdam art dealer. At this point, his life had become one mess after another, with debt piling up and his gambling addiction to deal with. Lysbeth left the city after the arrest and died, living around the city walls in 1663. What had become of de Witte’s daughter,Lysbeth, or the child he gave birth to was unknown.

People and patrons tried to help him but his temper became an obstacle. He eventually committed suicide in 1692 after an argument involving rent. The genius artist died alone, his life was in total shambles that not even the Church, greatest of all patrons of art, could save him. Such was the sadness of his story that modern sources usually omitted the details of his life and would focus instead on his contributions to art.

Featured and 1st image Interior of the Oude Kerk, Amsterdam via Britannica.com

2nd image School of Athens by Raphael, background based on Bramante’s design, via Wikipedia