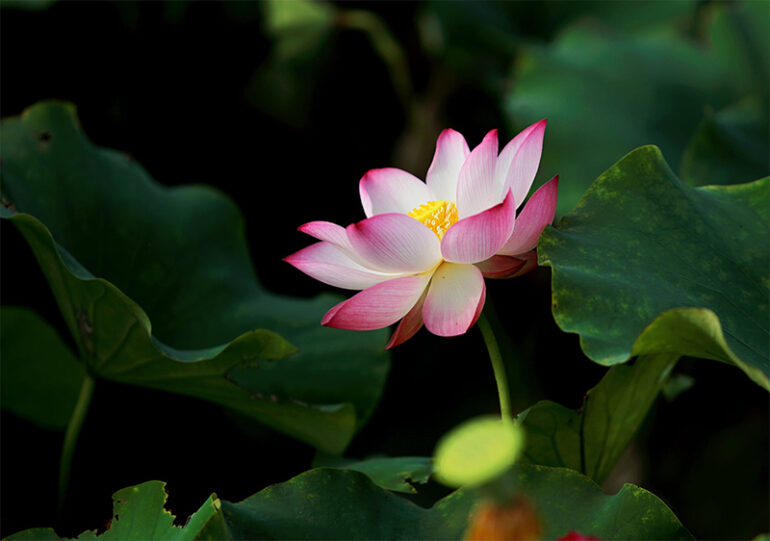 Silk has been around since the beginning of civilization and has remained a luxurious fabric until now. Silk’s allure comes from its soft and smooth texture and lustrous appearance, qualities that were unlike any other material.

Silkworms produce natural silk, and the process of making silk hasn’t changed since its conception 4,800 years ago. It takes almost 2500 silkworms to make a pound of silk, and the process from start to finish is tightly controlled and labor-intensive. The silk threads harvested from this process are either for embroidery or making fabric. Silk and embroidery were very popular in China as luxurious clothing and intricate art pieces before they spread across the world through trade routes, fittingly named the Silk Road.

For the longest time, it was thought that silk could only be made from silkworms. However, in Southeast Asia, farmers discovered a new method for making silk using lotus stems. In many countries, the lotus roots, seeds, and flowers have many uses, but the stems were often considered waste.

How lotus silk is made

Lotus stems are carefully cut open and stretched to reveal the silk fibers in the stem. Because they’re so delicate, these fibers are carefully extracted by hand. The silk must be harvested the day the lotus is picked, or else the fibers will become hard and brittle. A worker can extract silk from 200 to 250 stems a day, but a typical scarf requires silk from 9,200 stems. This means that it would take two months of work to make a scarf. This difficulty in extracting silk from the raw material plus the long and arduous production is why lotus silk is one of the rarest textiles in the world.

After extraction, the threads are dried and spooled. Weavers can then use them to make silk fabrics or dye them for embroidery.

Lotus silk is just as soft as silk, breathable as linen, and with more elasticity. Additionally, people are drawn to the fact that the manufacturing process is cruelty-free. Traditional silk manufacturing requires the silkworms to be killed by boiling or steaming their cocoons. Lotus silk harms no living creatures and is more environmentally friendly as it reduces waste. It also provides livelihood and additional profits for the farmers and weavers in Vietnam.

While lotus silk holds several advantages over traditional silk, the one thing that holds people back is the price. An embroidered 25-centimeter scarf can sell for over $200. However, it’s understandable when you think about the craftsmanship and time needed to produce this silk.

While it started as the modest effort of a few farmers, lotus silk is now being sought after by fashion designers and clothing manufacturers. It has also inspired men, women, and children to take up the craft to make more intricate designs to sell to tourists. Right now, they’re focused on finding ways to improve yield and decrease production time to meet the growing demand. It’s impressive to see how such beautiful works of art can come from the humble lotus stem.

1st and featured image from https://www.pexels.com/photo/selective-focus-photography-of-pink-petaled-flower-in-bloom-1179863/