Andrew Warhola or more commonly known as Andy Warhol was born in Oakland, Pittsburg, Pennsylvania from an immigrant family originally from Slovakia. At the age of 8 while bedridden for some months due to Chorea an illness that targets the nervous system, Warhol had drawing lessons from his mother. He took free art classes in Carnegie Museum of Art in Pittsburg during his elementary school days. Warhol’s father valued his son’s talent in the arts – when he died, it was made clear in his will that all his life savings are for his son’s college education.

Warhol attended the Carnegie Institute for Technology now known as Carnegie Mellon University in 1945 and took up Bachelor in Fine arts focusing on pictorial design. Upon graduation, he moved to New York City and began his career as a commercial artist. It was this time that he altered his name and became known as Andy Warhol. He was hired at Glamour magazine and became an esteemed artist with his signature whimsical style using blotted lines and rubber stamps.

By the late 1950’s Warhol focused on paintings. In 1962, Warhol debuted his Campbell’s Soup Cans which catapulted him into superstardom. The masterpiece was composed of 32 individual canvasses of the flavors Campbell’s produced that time. They were displayed together mimicking how a grocery store would put products on shelves. Campbell’s Soup Cans was inspired by mass produced posters and labels, Warhol’s piece was mostly hand painted while the fleur de lis at the bottom of each can was made through a hand stamp. He painted tightly around the outlines resembling mass produced offset lithography printmaking. The piece showcases repetition and regularity with slight variations as seen in the labels of the cans reminiscent of how advertising’s style. According to Warhol on the Campbell’s Soup Cans, ““I used to drink it. I used to have the same lunch every day, for 20 years, I guess, the same thing over and over again.” 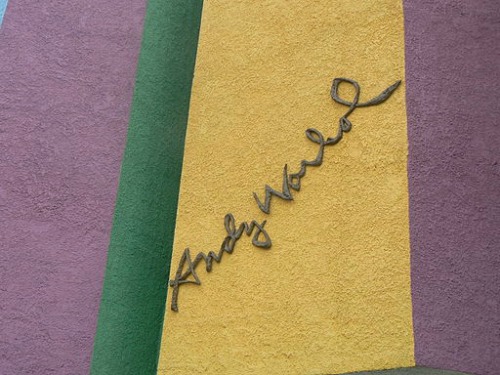 Andy Warhol’s iconic work on these consumer product is the very essence of the pop art movement that Warhol espouses. Pop Art is an artistic style that aims to incorporate popular culture into the fine arts. Its goal is to shatter the lines that divide what is known to be high art and low culture. It uses easily recognizable images such as common places and everyday objects – a glaring contrast to the traditional subjects of high art which includes mythology, morality and history. Icons of the art movement aims to elevate popular culture and everyday life to the fine and high arts. A key notion in the pop art movement is that it does not recognize that there is a hierarchy of culture – artists may use and borrow influence and imagery from any source they see fit.

What is exceptional on Warhol’s work is not the form or style used. It is how recognizable images such as the mass produced commodity is inserted in the context of fine and high art. What was ground breaking was the inclusion of a factory produced item, one that is available to everybody, into an elite and high culture practice of the arts worthy of being displayed in museums. Warhol drew inspiration from easily recognizable products and figures, lithography and poster art, and his background advertising.