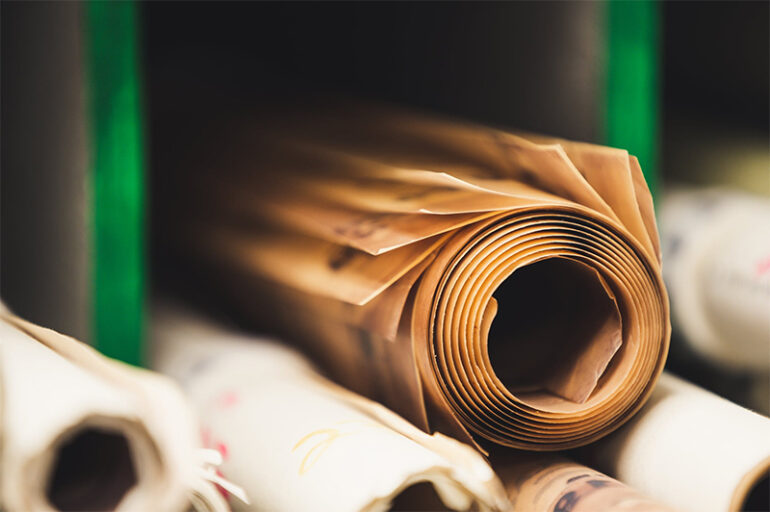 Papyrus holds a long and noble history in Egypt. It was invented 5,000 years ago and transformed writing among ancient civilizations. Before the invention of papyrus, people used tablets and stones. Papyrus made writing easier, faster, and more accessible.

Papyrus paper gets its name from its raw material, the papyrus plant. This plant was abundant along the Nile River and was also used for weaving shoes and other necessities. To make papyrus paper, the plant is harvested, cut into lengthwise strips, then soaked in water for one to two weeks. This soaking softens the fibers and improves adhesion. Once they are malleable, the strips are woven into sheets of paper, then dried by placing heavy stones on top.

For many generations, papyrus was the primary writing material of many civilizations. However, in 1100, artisans invented paper derived from wood pulp, which was faster and cheaper than papyrus paper. Additionally, the papyrus plant nearly went extinct in 1800, forcing the craftsmen to abandon papyrus making and pursue other work.

In the 1970s, art professor Dr Hassan Ragab revived the industry by bringing the papyrus plant from Sudan to the Nile River and developing a modern method of making papyrus. His determination to restore papyrus making in Egypt resulted in him opening his first papyrus institute in Al-Qaramous. Here, he spent his time teaching the locals the art of papyrus making. In 1989, he estimated that the industry was worth $100 million a year.

In just two decades, papyrus is the core of the local economy, with the citizens contributing by cultivating papyrus plants, making papyrus paper, and creating art to sell to tourists. Egypt has become so proud of this artform that its president sometimes presents these papyrus paintings as gifts to other world leaders.

Unfortunately, the past few years have not been kind to the art. The 2011 uprisings in Egypt resulted in a crash in tourism. To add salt to the wound, the COVID-19 pandemic in 2020 halted tourism again, which tanked demand for papyrus paintings. Many artists have had to quit due to poor sales, but others are determined to keep going. They view the art as a vital piece of Egypt’s history and a part of their identity.

The vaccine rollout of 2021 is giving these artisans hope that the papyrus industry will recover and flourish.

Indigenous art holds tremendous cultural and historical significance, and local governments should support their local artisans as they protect these sacred and ancient traditions. Today, only a few acres of land are available for papyrus plant cultivation, and only a few villagers are willing to make papyrus paper their full-time job. With support from the government, they could expand the farmlands to increase production. They can provide financial incentives to entice more people to take up the craft. Promoting the craft to locals and tourists can generate interest in papyrus art so the industry can continue to grow. They should also arrest those who make fake papyrus paper out of banana skins to maintain the integrity of the craft.

1st and featured image from https://www.pexels.com/photo/stack-of-paper-rolls-in-shelf-3720483/