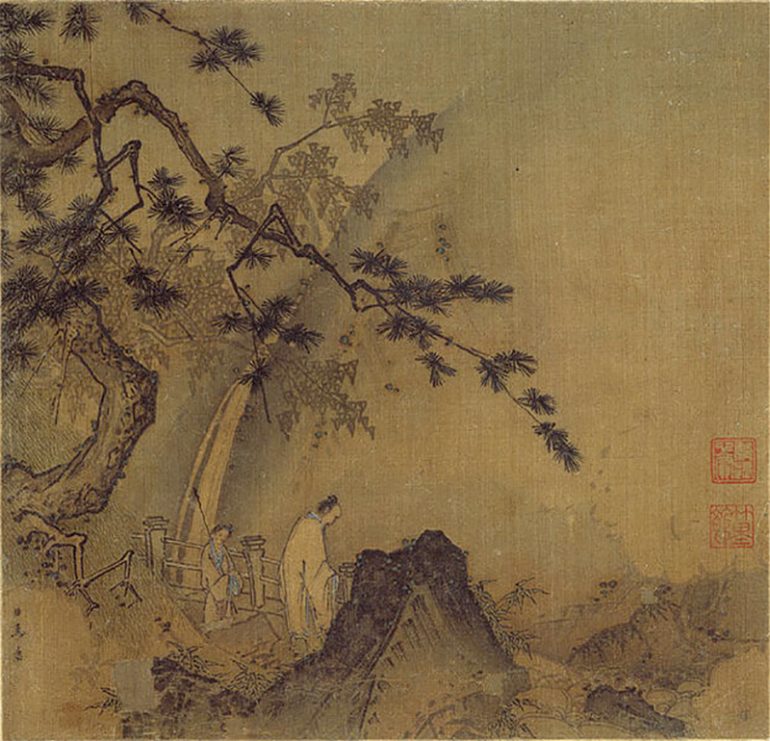 Chinese landscape painting and calligraphy are known and valued worldwide for their simplicity, evocativeness and deeper meanings. During the country’s many dynasties, different schools of art emerged, with some dynasties favoring artists of different genres.

The works of Mǎ Yuǎn, a Song Dynasty painter, evoked romanticism and lyricism. He, together with Xia Gui, formed an art school – the Ma-Xia School of Painting. The two were considered by many to be the finest artists during their time. Ma Yuan became quite influential, inspiring not only Chinese artists but also early Japanese artists such as Sesshū and Shūbun.

His own career as a court painter started under Emperor Xiaozong, the father of  Emperor Guangzong who made him a daizhao (editorial assistant). Successor Emperor Ningzong, the son of Emperor Guangzong, gave him the highest Chinese honor, the Golden Belt. Emperor Ningzong and his wife, Empress Yang Meizi were very fond of the remarkable artist to the point of writing a number of poems based on Mǎ Yuǎn’s paintings.

Despite his popularity among nobility, very little is known about the life of Mǎ Yuǎn. He was born circa 1160-1165 and died at the age of 65 in 1225. The last painter in the Mǎ family was his son, Mǎ Lin, who rose to the level of painter-in-waiting (zhihou).

The celebrated artist was very versatile. However, the popularity he enjoys today is for his landscape paintings. Initially, his technique was inspired by another very another revered artist, Li Tang. He was one of the most influential among the Chinese landscape artists of the Song Dynasty. Both Xia Gui and Mǎ Yuǎn, along with other artists, studied his works and his painting techniques. Later, Mǎ Yuǎn was able to develop his own style, distinguished for the addition of decorative elements such as the strong and resilient pine tree.

Mǎ Yuǎn created his signature strong pine trees with a stump brush, always painting them as strong and tall and given features of elegance, beauty and vigor through his brushstrokes. An example is the painting at Tokyo’s Seikadō Foundation, called “Rain over Trees on a Rocky Shore.”

Aside from that, Mǎ Yuǎn was also noted for developing his own signature design. It was termed as a “one-corner” composition. In his paintings, Mǎ Yuǎn normally positioned his subjects to one side or to a corner of this scroll or canvas. The rest of the painting is left almost empty. 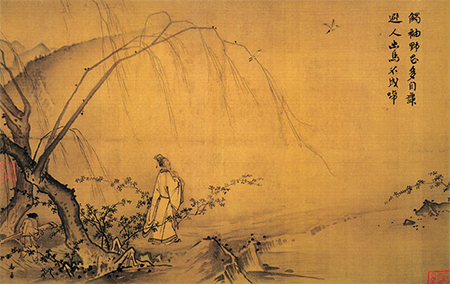 Other surviving works of Mǎ Yuǎn attest to his versatility. At the National Palace Museum in Taipei, visitors can see several of his very delicate paintings of flowers. At the Palace Museum in Beijing is a series of his paintings with mountains and water as the main subjects. Some Zen masters in Japan also have a few of his oeuvres. Two paintings are displayed at the Kyoto’s Tenryū Temple while another one is in the collection of the National Museum of Tokyo.

Several surviving album leaves are being associated with Mǎ Yuǎn, although some of them are under dispute. Many painters imitated his style, thus, authenticity has to be verified. Some of the leaves that are definitely the works of the artist include those that are in a private collection in Cleveland, Ohio, the two leaves at the Museum of Fine Arts in Boston and the one entitled “Walking on a Mountain Path in Spring” that is in the National Palace Museum.

Several hand scrolls also survived, such as the “Four Sages of Shangshan” that belong to the collection of the Cincinnati Art Museum. However, all of his landscape screens were lost.

The artist’s romantic and lyrical interpretation of otherwise ordinary scenes is what  inspired other artists to imitate his works and his techniques. Most are almost mood paintings, like a scholar watching a waterfall. Many are romantic night scenes, such as the ”Banquet by Lantern Light” that also includes a poem composed by Emperor Ningzong and written by Empress Yang (National Palace Museum, Taipei). His works also roused the creativity of the viewers. You can see the drama, the movement, the story line and the subtle dynamism of the painting.