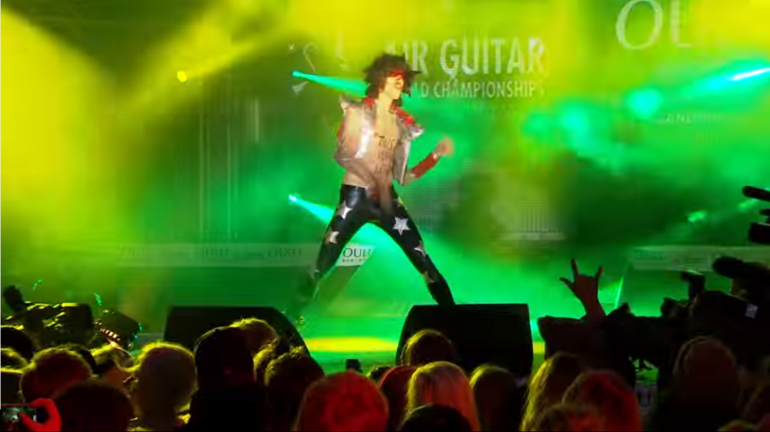 When you were a kid you probably once tried to imitate strumming an invisible guitar, mimicking how rock artists you saw on MTV strummed theirs. If you were to do it now, as an adult, you’d probably be embarrassed about it, thinking that you’re no rock star. But for many dancers, this move is a legitimate dance. And there’s even a competition for it. Welcome to the world of Air Guitar.

Basically, Air Guitar is a dance move that requires the performer to imitate strumming a guitar. Performers add other dance moves to the performance, sometimes even go as far as making exaggerated picking motions that can be seen from iconic rock bands. While such a performance sounds ridiculous (the Air Guitar World Championships website does admit that air guitaring is “previously a hobby to be pursued at home alone in front of the mirror or behind closed bedroom doors”), it is now a full-blown dance movement with its own world competition, the Air Guitar World Championships, and is enjoyed by thousands of people from around the world. Zac Monro is quoted on the website saying: “It’s impossible to be angry and play air guitar. Air guitar is the last pure art form.”

Air guitar is described as a performance that purely expresses the performer’s thought, but it isn’t without rules and different styles. In the World Championships’ website, there are listed four schools to air guitar:

If you’re looking for a different kind of performance art you’d probably want to try air guitar yourself. A unique blend of self-expression and childish abandon, air guitar looks fun and wild, just like the real rock and roll. As one commenter of the AGWC puts it: “It’s so stupid, yet so great.”

1st Image: The trailer from the Air Guitar World Championship, via Youtube.

2nd Image: The logo for the UK Air Guitar Championship, via their website.