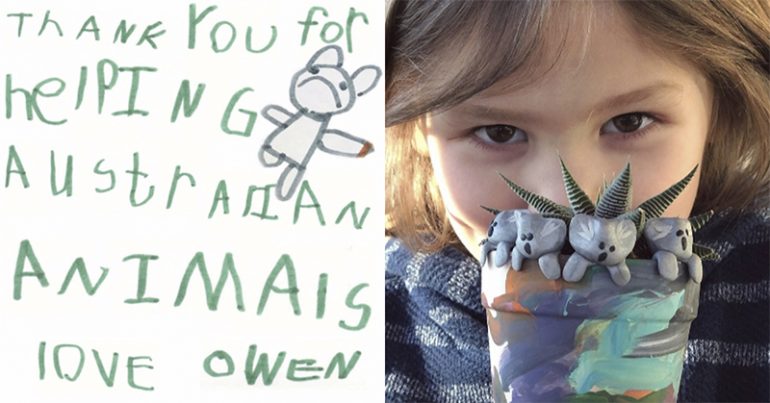 The world can be a big place for a little young boy, but, you are never too small to make a difference in your lifetime. Owen Colley, a 6-year old from Hingham, Massachusetts made this point clear as he made amazing clay art creating clay koalas and raised over $240,000 Australian dollars in a charity attempt to help animals that were affected by the bushfires in Australia.

The mother of Owen, Caitlin Colley told CNN in an interview that her son was so sad and upset about the bushfires in Australia and its impact on the wildlife of the entire country. His dad, Simon Colley is a true-blue Australian who grew up in Sydney. He, himself has spent some months there as a child, and so his heart was broken when he knew about what happened to Australia.

As the news of the environmental crisis went on, the young kid knew he had to do something. He drew a picture of Australian animals in the rain. His dad said it was the very first time his kid asked something other than toys or something for himself. He made koala clay art and a pretty sustainable art design that soon became a hit.

Owen wanted desperately to help, and so he and his entire family concocted an idea to create cute clay koalas. They were given as gifts to friends and family members at first who in turn donated $50.00 dollars or more to the volunteer group Wildlife Rescue South Coast in Australia.

But, they immediately surpassed their initial fundraising target of one thousand dollars ($1,000.00), as news spread about his cute clay koalas. The entire family then created a GoFundMe account and made a goal of $5,000.00 AUD. But, surprisingly, they have raised over $240,000.00 AUD in just one week and counting.

The clay koalas became such a hit that they did not only ran out of clay to buy, but his parents bought practically all the available stock within the 20-mile radius.

Colley has been in close contact with clay manufacturer Sculpey and they send them more clay and more friends came in to partake in their koala-making parties.

The help of Owen was greatly appreciated. In southeast NSW, the area has gotten the most intense fires, so the Wildlife Rescue South Coast worked hard at rescuing and rehabilitating animals that were caught in the bushfires. The widespread damage has prompted them to call on for more help.

The unprecedented bushfires in Australia have left the entire country torn and devastated, with about 26 acres of land burned down, killing 30 individuals, and destroying some 2,500 homes thus far. This is in NSW alone, not to mention other parts of the country. There approximately one billion animals dead and their entire habitat burned to ashes. Experts are foreseeing that it will take a couple of decades for the environment in Australia to recuperate. The funds raised by this brilliant 6-year old have made a great difference in the lives of many wildlife in Australia to date.

1st and featured image from https://chipchickcom-wpengine.netdna-ssl.com//wp-content/uploads/2020/01/owencolley.jpg