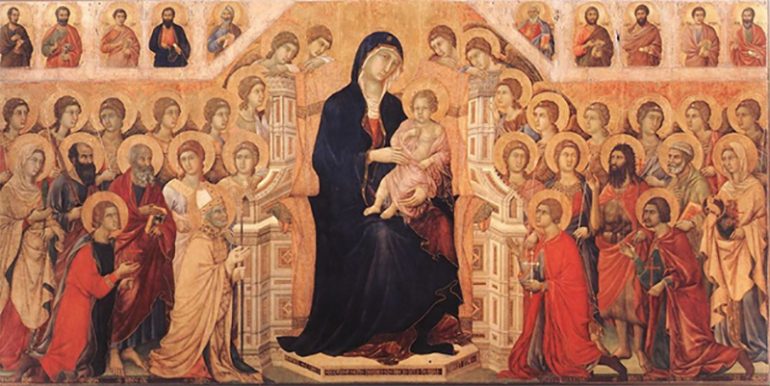 One of the earliest and most well-known schools of painting was the Sienese style of Gothic Art. This school of painting was founded in the 13th century by Guido da Siena and Coppo di Marcovaldo. Both artists are known to have been active during the founding years of the Sienese style but beyond that there is almost nothing we know about these two or how they eventually ended up creating a new artstyle.

The place where this school of painting was founded (Siena, Italy) already has a tradition of painting by then. The Sienese school eventually took over Siena, rivaled the Florence school of art for a while, and was described as a more conservative style. Being a style exclusively made to be used on religious themed art, the comparison between the two highlights Sienese’s closeness to the conservative “grace and beauty” of Byzantine art and International Gothic: “If Florentine art is above all naturalistic, Sienese painting has a lyrical, dreamlike quality created by a mixture of Byzantine heritage, miraculous subject matter, inattention to proportions, and atmospheric colouration.”

Conservative though it may be, the artistic growth of the style was enough to attract artists like Donatello, Signorelli, Pintoricchio, and Rafaello. But the school’s greatest champion is Duccio di Buoninsegna. His Maesta Altarpiece is considered the finest masterpiece of his time. It was his art that’s founded International Gothic. International Gothic presents many of the traditions of the Sienese school, but infuses it with other elements from other schools of art that was popular in Europe at that time, especially from the north. This school of art serves as the link between Gothic art and Renaissance art.

At its peak in the 14th century, the Sienese school of art saw the genius of it’s champion, Duccio di Buoninsegna, followed by other notable artists: Simone Martini, a student of both Giotto di Bondone (who is mostly known for Florentine art) and Duccio, is said to have learned from his Sienese master the skill on how to harmonize colors. He is known for the Maesta, the frescoes in the lower church of S. Francesco at Assisi, and the Annunciation with St. Margaret and St Ansanus triptych.

The Lorenzetti brothers, Pietro and Ambrogio, were former students of Duccio. Even though they have preferred Giotto and the Florentine style later they owe much of their early works to Duccio and the Sienese school.

By the 15th century the Sienese school was lead by Stefano di Giovanni and Giovanni di Paolo. Stefano was known for a double-sided altarpiece that he did for an Francesco, Borgo San Sepolcro. Giovanni is a very conservative artist and disdains the progressive trend of his era to naturalism and humanism, but somehow his later works were said to have heralded the 16th century Mannerism and the 20th century Expressionism.

Other artists of the Sienese school at that time were Taddeo Di Bartolo, noted for his frescoes in the Palazzo Pubblico and his mentoring of Piero della Francesca, who is an important figure during the Early Renaissance in Italy, Lorenzo di Pietro, known for his high quality works and illustrations to Dante’s Divine Comedy, Carlo Crivelli, and Matteo di Giovanni. 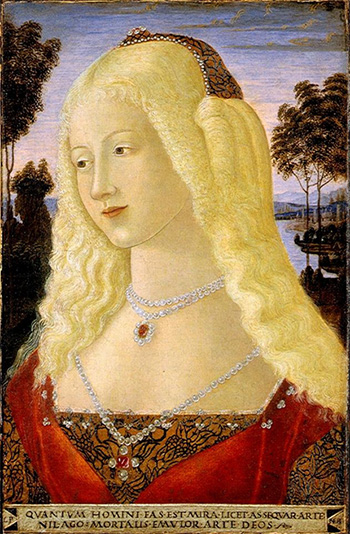 A student of Lorenzo di Pietro, Francesco Di Giorgio Martini painted the frescoes for the Bichi Chapel of Sant’Agostino. He also designed the Madonna del Calcinaio Church and created a set of bronze angels for the Sienese Cathedral. His partner and fellow student, Neroccio de’ Landi, created the Portrait of a Girl that’s now displayed in the National Gallery of Art in Washington DC.

During the last leg of the Sienese popularity there’s Baldassare Peruzzi and his friend Giovanni Antonio Bazzi. Bazzi’s “The Marriage of Alexander and Roxane” is widely held as his masterpiece. And finally, there’s Domenico Beccafumi who merged the conservative Sienese traditions of old with the more popular elements of High Renaissance.

Featured and 1st image by Maesta, by Duccio, via Wikipedia

2nd image by Portrait of a Lady, via Wikipiedia