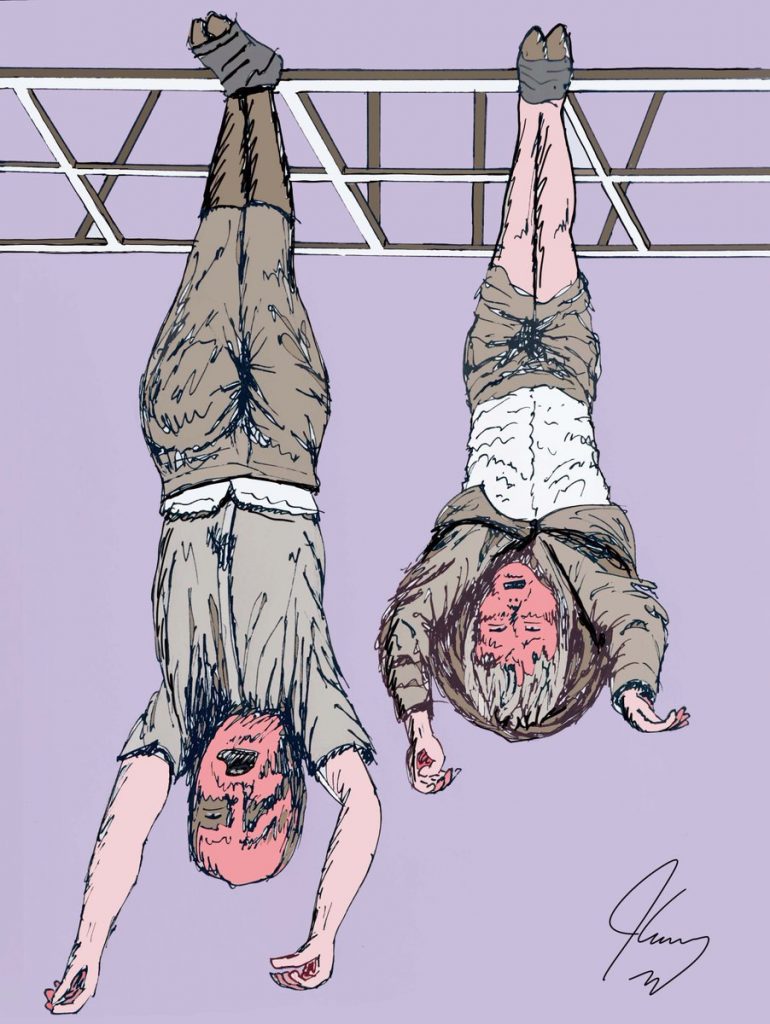 You’d think that after April Fools the jokes would die down, but if you’re active in the art industry social media sphere, you have most likely heard how two popular people are having a row online just a while ago. Not that it is an uncommon occurrence, but this time the participants are so unlikely to be paired you’d think this is a late April Fool joke too.

Jim Carrey is one of those anti-Trump leftist artists who equate Trump supporters with Nazis and Fascists. Naturally, just like everyone in his circle, they would openly criticize fascism. Carrey does more so because he started making anti-fascist art and share it online to his followers. Then he drew a sketch of the inventor of Fascism, Benito Mussolini, executed and hanging upside down with Claretta Petacci with the caption “If you’re wondering what fascism leads to, just ask Benito Mussolini and his mistress Claretta.” And this caught the eye of Mussolini’s granddaughter, Alessandra Mussolini.

Now Alessandra Mussolini isn’t just an infamous someone’s granddaughter. She’s an accomplished musician and a model. She’s also a politician, known to be right-wing like her grandfather, and known to hate Communists, the left-wing equivalent of Fascists. In fact, so much so, that she attacked and kicked known Communist, Katia , a former Italian Minister for Equal Opportunities, and told her to “go live in Cuba.” She does, however, hold extremely progressive views about a lot of issues that leftist would agree. This earned her ire from some of Italy’s conservative parties, calling her a “socialist” or “leftist.”

She has some shares of controversies, much like every other politician. And she’s about to add one more when she saw Carrey’s work.

As you can see, Alessandra is a fierce woman and even if she does claim both conservative and liberal views she does not hesitate to attack anyone that attacks her and her family (or if they’re a Communist). She once attacked an Italian MP candidate when Vladimir Luxuria called her a fascist, to which she replied “Better fascist than .”

So when she saw Jim Carrey’s drawing, she called him a bastard immediately. How she found the tweet, no one really knows. But then Jim Carrey’s followers started calling her Fascist and started making jokes about hanging her upside down. In response, Alessandra called Carrey’s supporters “Antifa,” the name of the violent ultra left-wing group that exists in the USA and other parts of Europe and Asia and are composed of mostly Millennials. Carrey commented that she can just flip the images and that she’s still in the gov’t while still supportive of Fascism.

While all of this is happening, Alessandra posted several other tweets that urged Jim Carrey to draw the problematic side of American history. Critics said that Jim Carrey is Canadian and that it doesn’t apply to him. But records do show that Carrey holds American citizenship and thus it would apply to him as well.

As with all Internet rows, this one fizzled out, partly because Carrey had the common sense not to respond or pursue an argument further than his last comment. If he did, because he’s the one who threw the first stone, this row would have likely escalated. But this won’t probably dampen his spirits and will continue making art he’ll share with his followers. He already had a lot of success with it and has once opened an exhibit for his works.

As for Alessandra, it is likely that she’s concerned more about someone badmouthing his grandfather than Fascism. The Italians are known to have close family values, much like the Spanish, and La Famiglia is known to be one of the central aspects of Italian life, after all. A concept that might be too alien to the modern left-wing to understand.

1st Image: “What Fascism Leads to…” by Jim Carrey, via his Twitter.

2nd Image: Jim Carrey at work from his documentary “I Needed Color,” via artnet.