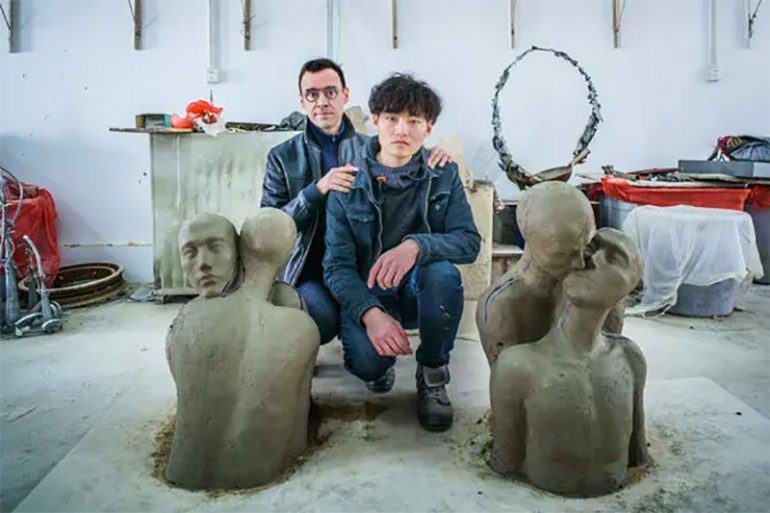 Repression on artistic freedom leaves many with no choice but to stay inside their closet and continue creating from there. However, one custodian is providing a safe space for artistic expression among gay Beijingers. Just like how the KAWS phenomenon became an ‘in’ thing in Asia, Beijing’s LBTQ has likewise evolved in terms of art and expression.

From Outside Looking In

Looking at it from the outside, the front of Destination – a popular area in Beijing that openly welcomes gay people – is absolutely dull and boring. However, if you explore this four-story cultural building, it actually houses a non-profit art gallery that challenges the norm.

This place takes a lot of effort to put up since censorship restrictions in China under the administration of President Xi Jinping have been stricter. And, even if same-sex relations were abolished in 1997, gays in Beijing still experience discrimination. They only dream of experiencing the freedom and acceptance offered to gay people in Taiwan, which is the heart of gay in Asia.

The glacial rate of accepted same-sex couples in mainland China has improved. However, most gay Chinese have no plan of coming out to their family, and gay conversion centers still operate in different parts of the country.

But, there is a massive gay community in Beijing. Destination, for instance, operated as a nightclub 15 years ago, and ever since, the place grew more prominent and was recognized as a cultural center. It is one of the limited areas where gay men can express their sexual orientation without any reservations.

Since its opening, the majority of its customers were gay men. However, it’s more than just a place where you can look for a date. There are also anonymous HIV testing, dance classes, yoga, and practice rooms for men who are in the choir. But the most interesting place in Destination was the art gallery located on the third floor. ART-Des offers a glimpse of the present condition of gay art in Beijing.

Presently, the art gallery highlights a bronze sculpture of 12 sinuous men, nude and clean-shaven, beating drums. When you look on the walls, there is a hanging mural that represents a group of male companions, dressed in boxer shorts. In the lower portion, one hand softly grasps the other. A deeper level of intimacy is shown in another artwork. Two-toned torsos lean into one another for support – both wear only white briefs – and one man clutches the groin of the other.

Only a few art galleries that operate in China accept and display works created by gay artists, or art that tackles homosexuality. This is one of the reasons why many artists choose to “paint from the closet” so their works can reach more significant acceptance.

However, by doing this, artists become more prone to discrimination from people who are against gay people. The Destination is offering an essential platform. It allows art that depicts same-sex relations from all artists.

The custodian of ART-Des is a French photographer named Pierre Alivon. He has been living in Beijing for roughly four years.