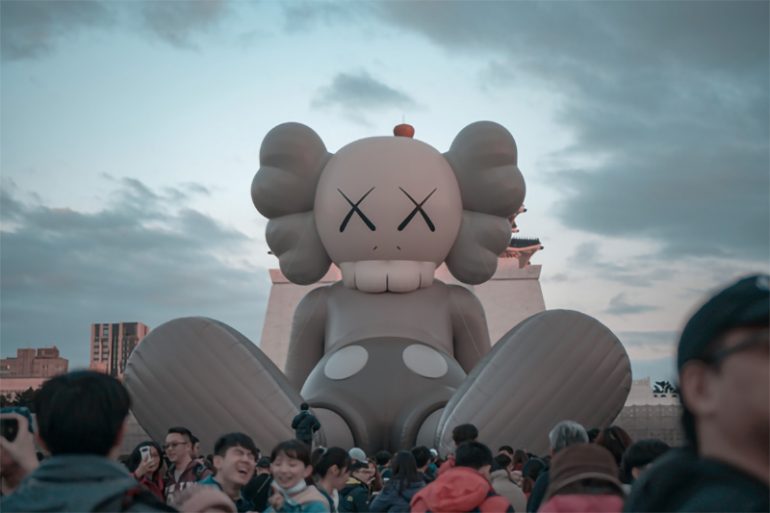 In mid-2019 saw the last collaboration between contemporary visual artist KAWS and Japanese fast-fashion brand Uniqlo. Those who are familiar with the artist’s work immediately snapped up some of these items once it was out in stores, but others went with the hype of its release. My sister, who is a self-proclaimed hype beast, got me to buy a couple of shirts and a tote bag from the collection. The first round of this collection sold out quickly, which was then restocked a few months later.

That made me wonder, what is it about KAWS’ work that got everyone fighting tooth and nail (especially in China) for a piece of shirt printed with his cartoonish yet provocative design?

Brian Donnelly, the real name of the artist, established himself first as a graffiti artist in New York in the 90s. He tagged walls and freight trains with the letters that now make up his stage name. Then, he started adding his emblematic touches to advertisements scattered all over the city. He would open those in phone booths and waiting sheds, take them home, do his thing, and place them back once he was done. His beginning is similar to that of other notable artists like Keith Haring and Jean-Michel Basquiat, who were also graffiti artists who managed to combine the elements of street, pop, and fine art later on in their career.

KAWS also dabbled into animation by painting backgrounds for 101 Dalmations, Doug, and Daria, which he did after he finished illustration from the School of Visual Arts in New York. However, it was with his toys that he gained a cult following – the end of the 20th century saw him in Japan to create what we know now as Companion, the Mickey Mouse-looking figure with crossed-out eyes. Five hundred pieces were produced, which sold out almost in a snap. Today, the artist has collaborated with iconic brands such as MTV, Nike, Dior, and Uniqlo, and celebrities like Kanye West and Pharrell Williams.

Although his work has been exhibited worldwide with giant installations and displayed artwork in galleries, that was not always the case. As Brooklyn Museum director Anne Pasternak said in an interview with The Guardian, art with too much mass appeal “makes the art world uncomfortable.” But it was by being accessible that KAWS committed himself to. “When you’re a kid, you look at galleries as these zones that are like, ‘stay out’ and ‘you’re not welcome’ or ‘you’re priced out’. Through product, you get to become familiar [with the art] in a very personal way, in your own home … It gives you the confidence to go to see other works, to learn more,” he said in the same article.

Watching him talk about his artwork and the impact he has on today’s art landscape is a humbling experience. He also looks younger than his 45 years but he has accomplished a lot that most artists would only dream of. He might not be picky with his mediums, but he knows that whichever he uses can still get his point across. “In my mind, I thought, art’s purpose is to communicate and reach people. Whichever outlet that’s being done through is the right one.”

1st and featured image from https://unsplash.com/photos/QX_-WrpQ8hk