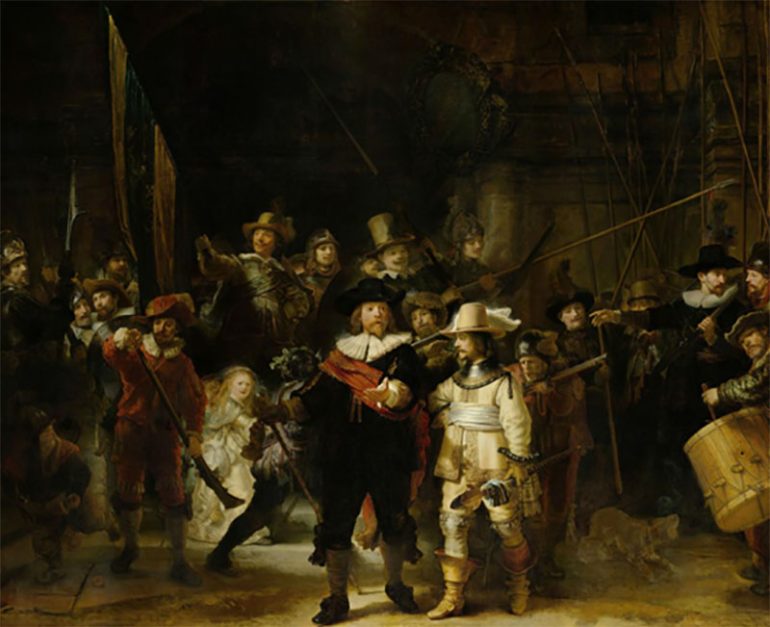 The Nightwatch is probably the most memorable military art in history. Its real title was Militia Company of District II under the Command of Captain Frans Banninck Cocq. It was also called The Shooting Company of Frans Banning Cocq and Willem van Ruytenburch. The nickname “The Nightwatch” came to be because of the varnish that covered the painting made the scene look like it was set during night time. This was incorrect, however, and the error was only discovered after when the varnish was removed. But by that time, the name’s already stuck.

The sheer colossal size of the painting, at 142.9 in x 172.0 in, is the most notable attribute of the painting, which gives it a very realistic aura. Created by Remembrant during the 15th century in the Dutch Golden Age of painting, it was a scene that shows Captain Frans Banning Cocq and his militia moving out. The captain wears black with red sash, while his second, Villem van Ruytenbruch, wears yellow with a white sash. Behind them is the company, a white woman with a dead chicken tied to her waist, and the man responsible for carrying the militia’s colors (Jan Visscher Cornelissen).

The painting cost 1,600 guilders at the time of creation. It was commissioned by Frans Banning Cocq with seventeen other people from his militia. It was meant to be hanged in the banquet hall of the Musketeers’ Meeting Hall (Kloveniersdoelen) along with other commissioned works from other artists. In 1715, it was moved to the Amsterdam Town Hall. There, the painting was altered from all sides so that the painting would fit between two columns. Two people were cut off from the painting due to the altering. There exist a 17th century copy of the original, now on display at the National Gallery in London.

For the rest of its life it would be on display for long periods of time, only to move mostly during times of unrest. When Napoleon invaded the Netherlands, it was moved from the Town Hall, then called Palace of the Dam, to its new home in Trippenhuis. It returned back to the town hall by the order of Napoleon, but was immediately returned to Trippenhuis after Napoleon’s occupation ended. From there it was moved to the Rijksmuseum in 1885. Before the start of World War II, the painting was stored into a cylinder and moved into Radboud Castle, Medemblik. It returned after the war ended. 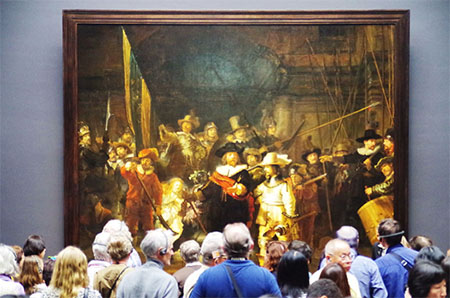 On December of 2003, the painting was moved to a temporary location because the museum is being refurbished. The refurbishment took ten years and when it finally ended it returned back to its original room in the museum, the Nachtwachtzaal.

There had been three attacks on the work: one during World War I, where a man left knife slashes on it to protest his unemployment; another in 1975 involving a man using a butter knife to vandalize the work, leaving zigzag marks on it; and another one in 1990, where a man was caught after he sprayed acid on the painting. The painting was restored after each attack, although the 1975 attack left marks that are still visible when seen up close.

His contemporaries knew very well the hard work Remembrant put into the creation of The Nightwatch. Remembrant used multiple techniques, sometimes working with great detail, and had masterfully used the sunlight to put Frans, Villem and the woman (who symbolizes the group like a kind of mascot) into the gaze of the audience. His former pupil, Samuel van Hoogstraten, praised the work greatly, though he also wished that his former master ‘had put more light into it,’ probably without realizing that it was the varnish on the painting that was contributing to the darkness. Still the work became known as Remembrant’s downfall. An accepted explanation for this was that the broad taste of the Dutch for art had simply changed and that his style fell out of favor.

2nd image by The Nightwatch in display at Rijksmuseum in Amsterdam, <a href=”https://commons.wikimedia.org/wiki/File:NL-amsterdam-rijksmus-rembr-nachtw.jpg”>via Wikimedia</a>