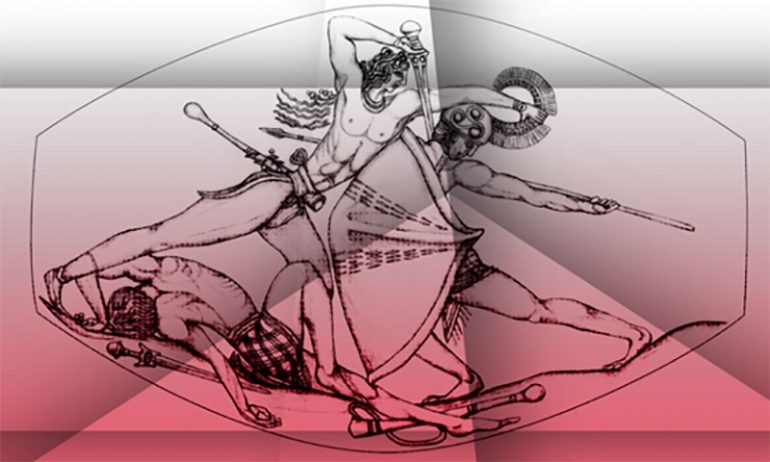 A seemingly uninteresting gemstone that was discovered in the tomb of who became known as the Griffin Warrior has made news around the world. Why? Because after cleaning the limestone-encrusted artifact, archaeologists found a work of art so complex it is deemed ages ahead its time.

The Griffin Warrior is the name given to an ancient Greek warrior whose burial tomb was discovered near the Palace of Nestor at Pylos in 2015 by a team of archaeologists sponsored by the University of Cincinnati. The artifacts found inside the tomb were discovered to have been older than the Palace: it was from the time when the Mycenaean civilization was just taking off. The Palace near it was discovered in 1939.

It was noted that most of the artifacts in the tomb are made of metal: gold, bronze, and silver. There were also jewels and ivory, leading to the discoverers that the man was of great importance, probably a local leader and one of the founding leaders of the Mycenaean civilization.

According to the website dedicated to the Griffin Warrior, the discovery was one of the things they least expected. Directors Sharon R. Stocker and Jack L. Davis comment: “It was good luck to discover it, almost as if its occupant wanted his story to be told. We thought at first that we had discovered the corner of a room of a house. Graves of this sort are rare, and it is unlikely that more await discovery.” 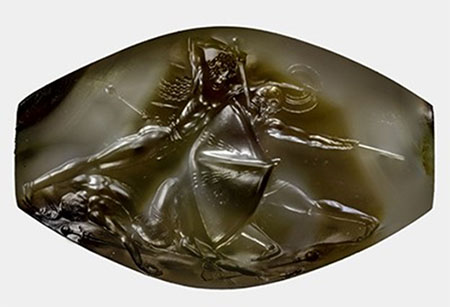 One of the artifacts discovered in the tomb was a bead encrusted with limestone. No one can really tell what it was. It wasn’t until the artifact was cleaned that the discoverers found themselves face to face with an item that would challenge what we know about the history of ancient Greek art and threatens to re-write it forever.

It was called the Pylos Combat Agate and it was a sealstone that has an engraving that’s only an inch and a half wide. What’s fascinating about this artifact is that the engraving was found to be different from those of its time.

The engraving, which shows a warrior defeating two others, was so intricate that lots of the details were only half a millimeter across. The details put into the carving would not appear anywhere until the Greek’s classical period, about 1000 years later, according to Mr. Davis, and that the Minoans.

“It shows that their ability and interest in representational art, particularly movement and human anatomy, is beyond what it was imagined to be,” he added. “Combined with the stylised features, that itself is just extraordinary.”

Researchers called it “one of the finest works of prehistoric Greek art ever discovered.” It was so tiny and detailed that the work can only be appreciated when via photomicroscopy. Ms. Stocker explains that the scene would have been based on a legend well-known to the Minoans and the Mycenaeans and that the gem would have been very valuable during it’s time.

“I think he would have certainly identified himself with the hero depicted on the seal,” she said.

According to Davis: “It seems that the Minoans were producing art of the sort that no one ever imagined they were capable of producing.” And both he and Stocker agree that there’s a need for reconsideration of the evolution and development of Greek art. The Mycenaean civilization was theorized to have imported or stolen riches from the neighboring Minoans in Crete until the Minoan civilization fell in 1500-1400 B.C. which was roughly almost the same time as when the Griffin Warrior died.

“This seal should be included in all forthcoming art history texts, and will change the way that prehistoric art is viewed,” Ms. Stocker said while Mr. Davis added, “There will be many more surprises to come, for sure.” Some of the artifacts are still in the process of being cleaned so there’s still a chance that something which is just as good, or even better, might reveal itself afterward.

Featured and 1st image by A drawing of the carving on the Pylos Combat Agate, via magazine.uc.edu

2nd image by The Pylos Combat Agate, via magazine.uc.edu