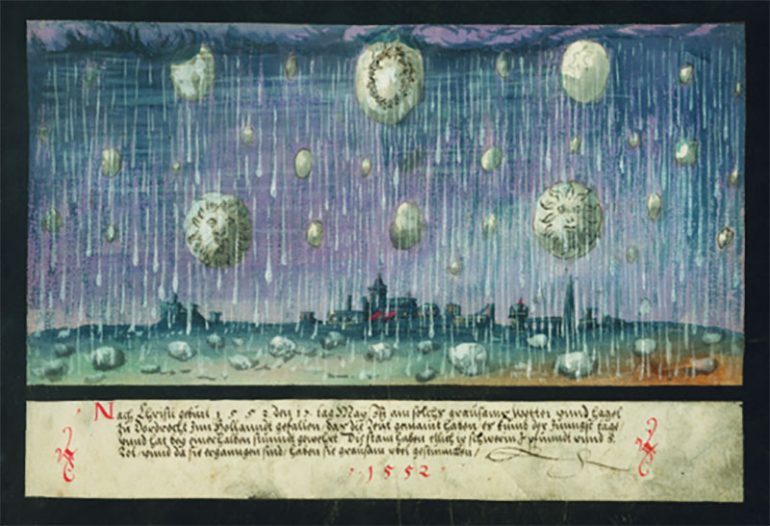 During the Middle Ages, devout Christians would have read the Revelations to John and would take the events dictated in it as signs of the end. It may have occurred to them that the most logical thing for Christians to do was to record signs similar to the ones happening in the book and spread it to all of Christendom so that other devout Christians and the doubters and sinners may know that the end was nigh. It would have been a worthy plan.

And so many, many years later a book was discovered. No one knows exactly who published it and why. No one knows of its origins except for the people who sold it via a German auction house in 2007. We can just imagine where it would have come from and why it’s made. But the Augsburg Book of Miracles is, even if it is a fake, probably one of the most beautiful books out there. Some people think it’s done by the Lutherans worrying over the end of times. Some way that it might have been by someone who’s interested in astrology. But if it was astrology then an erroneous record of a Mount Vesuvius eruption that’s dated 1482 seems really out-of-place in it. The last eruption was in 79 AD (not BC as Till Holger Borchert wrote in his paper about the book).

The book’s littered with beautifully illustrated cataclysmic and bizarre events. James Faber bought it from that German auction house in 2007. He brought it to Peter Bower, who concluded that the book was from the 16th century. Eventually, a few years later, Faber sold it to a private collector. Taschen has created a facsimile copy of the book that has all the paintings and their included texts. A second edition has been out since April.

The book is just one of the many testaments of men being fascinated with the apocalyptic landscapes, cataclysmic events, and miraculous signs and wonders that might herald the end of the world as we know it. Artists throughout history would draw, sketch, paint and write songs and accounts of the end and any signs they perceived to be part of it. They see it as a challenge to represent what is deemed to be unimaginable, with some challenging to present the events in the Book of Revelations. In the beginning, it might have people look at it with awe and fear. But eventually, men grew out of that fear and would just be awed. No one is going to read the Book of Miracles today and say “this is the end, fear for your lives”, no. They’re going to read it to look at the illustrations made by men hundreds of years ago about events that would be as bizarre and uncanny if it were to happen today as it did in their time.

And all the accounts in the book are just downright weird. An example of this is an illustration of the Tiber monster, which had been used by the anti-Roman Catholic Lutherans to denounce the corruptions of the Roman Catholic Church and point out that the Pope is the Antichrist (hence the belief that this book was by the Lutherans). Then there’s an illustration of the 1009 Burning Torch. Its caption reads: “In the year AD 1009, the sun went dark and the moon was seen all blood­red and a great earthquake struck and there fell from the sky with a loud and crashing noise a huge burning torch like a column or a tower.” But it really looks more like a log than a column or a tower and it gives a weird feel to the image.

The book ends with the illustration of events that are based on the Revelations. According to one of the authors of the book, Joshua Waterman, it is a good example of how the people back in the days would fit signs of wonders in a progressing narrative from God’s creation to the Second Coming. It is an artistic attempt to tie in the bizarre events that are happening in their time to the end predicted in the Revelations. Whether this will come to pass as well or not, no one really knows. Vague signs of things to come are hard to read these days.

Featured and 1st image by 1552 Hailstorm, via counter-face

2nd image by 1533 Dragons in Bohemia, via counter-face