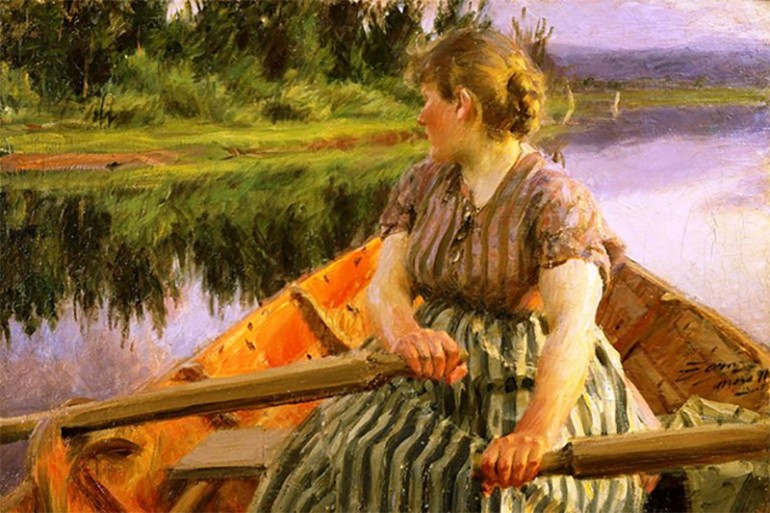 Talented Swedish artist Anders Leonard Zorn was born in Utmeland, Dalarna, Sweden on February 18, 1860. He was one of Sweden’s prominent artists who was highly skilled in etching, sculpting and painting and was highly successful in the international art scene. He was a great portrait artist who painted famous sitters, such as American presidents Theodore Roosevelt, William H. Taft, Grover Cleveland and Sweden’s King Oscar II.

He amazed the art world with his brilliant etchings, watercolors and paintings and perfected his craft through his travels to distant lands like Spain and Algeria. He adapted to his surroundings. He painted the local color of folk culture and the serene landscapes of his native country and rivalled John Singer Sargent as a popular high society portrait artist when he was in America. When he was in Paris, he painted like an inspired Impressionist who captured modern life with enthusiasm and vigor.

In 1920, Zorn and his wife, Emma Lamm established the Bellman Prize for outstanding Swedish poets. The prize is given annually.

Anders Zorn’s father was a wealthy brewer. He was born out of wedlock and his mother was a peasant. He studied at the Royal Swedish Academy of Arts in Stockholm from 1875 to 1880. At that young age he already displayed his extraordinary talent in art, which surprised his teachers and immediately received commissions from Stockholm’s high society. He traveled extensively throughout Europe and the United States and gained international acclaim as a portrait artist. He had the inherent ability to capture the model’s individual character. At the young age of 29, he was named the Chevalier de la Légion d’honneur at the 1889 Paris World Fair’s Exposition Universelle.

As an artist with many talents and skills, Zorn was notable for his alfresco nudes. He started out as a watercolorist, and was also equally talented in etching and sculpture. When he got married he settled in his hometown and switched to oil painting.

He made several trips to the U.S. to paint several personalities aside from the three U.S. presidents. Well-known sitters included Hugo Reisinger, Mrs John Crosby Brown and Mrs Walter Rathbone Bacon. He also created several self-portraits, including those requested by Florence’s Uffizi Museum.

Zorn was also widely known for his female nude paintings, for which he created several. He started painting nudes in the 1890s. His nudes were painted outdoors, adapting the techniques of plein air painting of the Impressionists, using natural light and the sea as background most of the time. 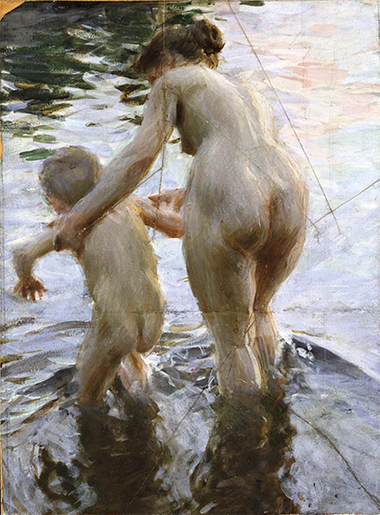 Zorn’s painting style showed the combination of the human body and nature as he added paint onto the canvas with quickly applied brushstrokes. Some of his famous nudes include “Girls from Dalarna Having a Bath” that showed a painting technique that was reminiscent of Manet’s style as well as the techniques employed by Old Masters such as Rembrandt and Titian. His other paintings that commanded large amounts during auctions include “Les Baigneuses” and “Nude at a Beach.”

Aside from his nude paintings, Zorn’s watercolors were also outstanding. His extensive travels gave him plenty of material for his work and these brought him fame. His watercolors received high favor when he exhibited at the Paris Salons. He also gained a place of honor at the prestigious London Institute of Watercolors. Some of his famous watercolors include “Daily Bread,” “Summer Vacation” and “The Thornbush.” Switching to oil in 1887 after he visited St. Ives in England, he produced exemplary work such as “Man and Boy in Algiers” and “Fisherman in St.  Ives.”

Anders Zorn died in 1920 at the age of 60. During that time, he was very popular in America and the sale of prints of his works even surpassed those of Rembrandt’s. He ranked together with Carl Larsson and Carl Miles, fellow Swedish artists and was also right on the level of Danish Impressionists Vilhelm Hammershøi and P.S. Kroyer in international fame. All the unsold paintings of Anders Zorn were donated to the Swedish State by his wife, which are now in the Zorn Collection Foundation (Zornsamlingarna), a Swedish State museum located in Mora.