Picasso’s Guernica was considered by art historians to be the only greatest work of protest art. It is filled with complex imagery and hidden symbols. Starting with the harlequins up to the Christian imagery up to the scenes of bullfighting, the entire canvass is overwhelming to interpret.

The sun is a technologically advanced eye 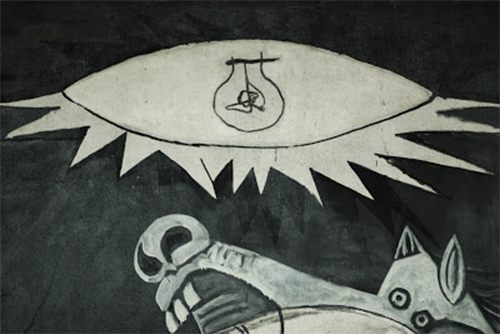 One of the many multifaceted symbols in the work is the combination of the eye and the lightbulb in the upper section which suggests everything from the watchful eye of God to the vengeful eye of Franco bearing witness to the aftermath of his orders.

One interpretation is that the light bulb or eye is a new technology used for refarious purpose. Light is a symbol of creation as it goes back to the book of Genesis. In Geurnica, light is destruction rather than creation.

On the far-left part of the painting, you will see one of the most popular images of Western art – a crying mother holding her dead child. Picasso’s secularizes Mary’s anguish by trading ger loss for a Guernican mother’s.

Picasso did not use real newspaper into its composition but the black and white palette along with the near typographical hash marks evokes the medium. He learned about the bombing of Guernica through a newspaper article, thus the incorporation of such. Also, the reportage establishes the painting as a document that bears objective witness to the tragedy.

The bull in question may have been Franco and the force behind it may be the fascist state. Picasso also considered the bull to represent brutality and darkness.

However, the bull may represent something more to Picasso which may be his own reaction and feeling towards the bombing.

The terrified horse is the Guernican people

The largest figure of the entire painting is a horse which can be found in the middle od the canvass. Picasso mentioned that this represents pain and death while invoking the four horses of the biblical apocalypse.

The horse hides the image of a skull

If you would closely look at the horse’s nostril and teeth, you will notice that it is made up of human skull. It may be interpreted as the suffering of the people or the amount of death and destruction brought by the bombing.

On the far bottom of the painting, you will see a destroyed body of a soldier with his head and arms visible. His one hand holds a sword which may represent the inability of the people of Guernica to fight back and a flower that may signify hope despite the war.

Featured and 1st image from http://stmhumanities.blogspot.com/2011/02/picassos-guernica.html