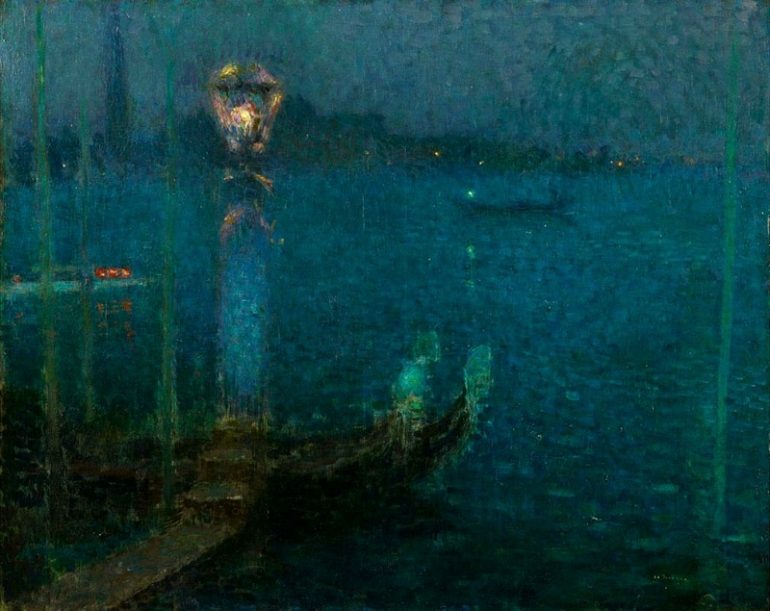 French painter Henri Eugène Augustin Le Sidaner, who described himself as an intimist painter, was born on August 7, 1862 at Port Louis in Mauritius. He was around 10 years old when his family decided to move to Dunkirk in France. His father was a ship inspector.

It took another 10 years before Le Sidaner was accepted into the École des Beaux-Arts in Paris. He was not a gifted artist and he felt caged in Paris. He cherished the time that he was able to escape in 1885 to Étaples, a leisure and fishing port in Pas-de-Calais department in northern France. In this commune, he was able to create small paintings with peasant girls as his subject. His realist style then was reminiscent of the works of Jules Bastien-Lepage, a popular French painter who was associated with the start of the naturalist movement. He also produced several large canvases for the Salon in the social Realist and Symbolist style that was fashionable during the end of the 19th century.

Most of the art education that Le Sidaner received during his stay at the École des Beaux-Arts was from Alexandre Cabanel, a French academic painter of portraits, religious, classical and historical subjects. But because of artistic differences, Le Sidaner left his teacher.

He was best known for his ability to capture light’s atmospheric effect and his intimate landscapes, showing his noble reverence for the beauty of nature. He was most comfortable when he’s out into the French countryside and doing plein air sketching, although he was also capable of painting from memory. When Le Sidaner first started he was a Realistic painter and as his career progressed, he was drawn to Symbolism and Pointillism, injecting a fresh sense of joyfulness and harmony in his work.

In Étaples, he lived at the art colony there together with Eugène Chigot, a childhood friend and an artist who, like him, was interested in atmospheric light. Le Sidaner also traveled extensively around France, many villages in Europe and several cities around the world. He may not be that great but he was a regular exhibitor at the Salon, London’s Goupil Gallery and the Parisian Galeries Georges Petit.

Le Sidaner finished his art education at the art colony in Étaples. Drawn as he was during his stay at the village near Pas-de-Calais by the works of the Impressionists and Post-Impressionists, and due to his isolation, he mainly created Northern landscapes, usually with peasants as his main figures, and used a technique that combined the immediacy of brushwork favored by the Impressionists and the Naturalism of Camille Corot. 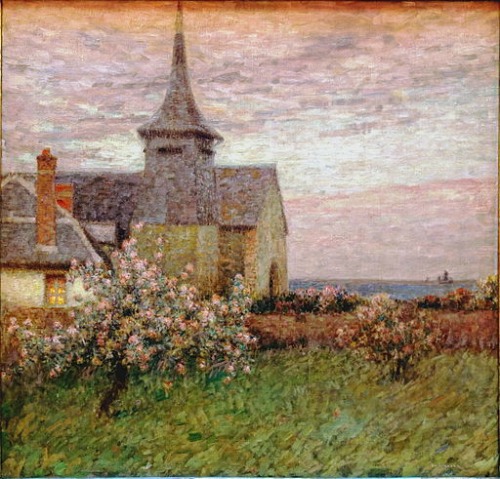 After touring many parts of Europe, he returned to Paris and joined the Symbolist circles, finally befriending Ernest Laurent and Henri Martin. He also changed his painting style. He no longer added figures to his landscapes and used warmer tones and diffused light instead. He joined many exhibitions throughout his career and won many prizes as well.

His mature style, without the human figures in his landscapes and mostly twilight scenes, were influenced by Monet, although he often painted from memory instead of en plein air. Just like Monet, Le Sidaner used his house and garden at Oise (Gerberoy) as a constant source of inspiration.

Henri Le Sidaner was a very popular painter during his lifetime. But because he did not belong to any art society or a particular art movement, he became forgotten after his death in 1939. He was as artist whose contemporaries were Post-Impressionists. He was not a Pointillist by he painted in dots. He also favored complimentary colors but was not a member of the Fauvist movement, in the same manner that he was not actually a Symbolist although some of his paintings were veiled in dreams.