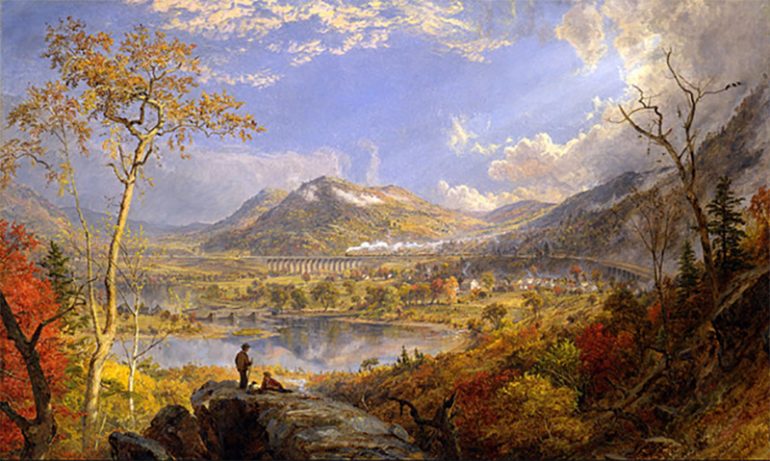 Jasper Francis Cropsey was an American landscape artist from New York. He practiced his craft during the mid-1800’s to 1900 and represented an important role in landscape art during his time. He was born in his father’s farm in Rossville, Staten Island in New York and was the oldest of eight children from a family that descended from Dutch and French Huguenot immigrants.

Cropsey as a young boy was often sick and had to skip school frequently. But on his absences, he taught himself to draw, sketching landscape scenes on the narrow margins of his books and on note pads.

At the age of fourteen, Cropsey built a model house which earned him a diploma from the Mechanics Institute Fair of the City of New York in 1837. That same year, Cropsey was taken into a five year-apprenticeship by architect Joseph Trench. In just 18 months, Cropsey had shown an excellent proficiency in drawing and became responsible for nearly all of the renderings in Trench’s office. Trench was impressed with his talent and supported him. The architect provided him with the space and materials to further improve his skills in art. During the same period, Cropsey took watercolor painting lessons from an English artist, Edward Maury, and received encouragement from American genre painters  William Sidney Mount and William T. Ranney.

The year 1842 marked his departure from Trench’s architectural firm. He earned a living from doing commissions for architectural design. He also started making landscape studies based on nature.

Two paintings of Greenwood Lake was inspired by his two-week sketching trip in New Jersey. These paintings went on display in 1843 at the American Art Union. It was during his succeeding trips to Greenwood Lake that eventually led to him meeting the artist Maria Cooley, who became his wife in 1847. They left for Europe right after their wedding for an extensive tour. The Cropseys traveled around Britain in the summer and later joined the American artists’ colony in Rome.

Back to the United States

In 1849, Cropsey returned to the United States. He first went to White Mountains. He later went to New York City and found a studio there. He stayed in New York most of the year and traveled through the State of New York, to New Hampshire and Vermont in the summer months to paint. At times he took on teaching jobs when the sale of his artworks was low. Among his many students, landscape painter David Johnson was the only one who gained significant acknowledgment. 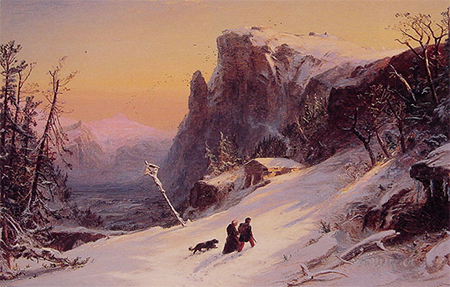 In 1856, the Cropseys went on a second trip to England. They found a studio and settled at London’s Kensington Gate. They led an active social life and became friends with some noteworthy personalities such as Sir Charles Eastlake, Lord Lyndhurst and John Ruskin. While in the U.S., Cropsey accepted commissions to paint landmarks in England. In England, he was asked to paint American-themed landscapes. He explored the Isle of Wight and the Dorset Coast and toured many galleries and museums. From his explorations, he came to know the paintings of J.M.W. Turner and John Constable’s nature paintings.

After staying for seven years in England, Jasper Cropsey went back to the United States. Soon after, he explored and recorded the battlefield of Gettysburg for one of his paintings. Again, he accepted architectural commissions. One of his most notable works during this period was the ornate cast and wrought iron work passenger stations called the  “Queen Anne” style. The project was for the Sixth Avenue stations of the Gilbert Elevated Railway in New York.

Cropsey’s love for architectural design did not diminish but he also made a name as a painter. He was a first-generation member of the Hudson River School. He’s noted for using color lavishly, with stunningly brilliant and bold autumn landscapes. For him, nature was a gift from God and the highest art form can be seen in landscapes. He wanted to depict the unspoiled and rugged landscapes of America.

Some of his notable works include Pontaine Marshes, Richmond Hill, Indian Summer, The Valley of Wyoming, Lake Nemi in Italy, Old Church at Arreton, Isle of Wight, Autumn on the Hudson, Spring-time in England, October in Ramapo Valley and Autumn on Lake George.

He was a regular exhibitor at the National Academy of Design, showing his propensity for dramatically composed, meticulously detailed and realistic scenes. He was a founder of the American Society of Painters in Watercolor, which later became the American Watercolor Society.

Despite his importance in the history of American art, Jasper Francis Cropsey left this world in anonymity in June 1900.