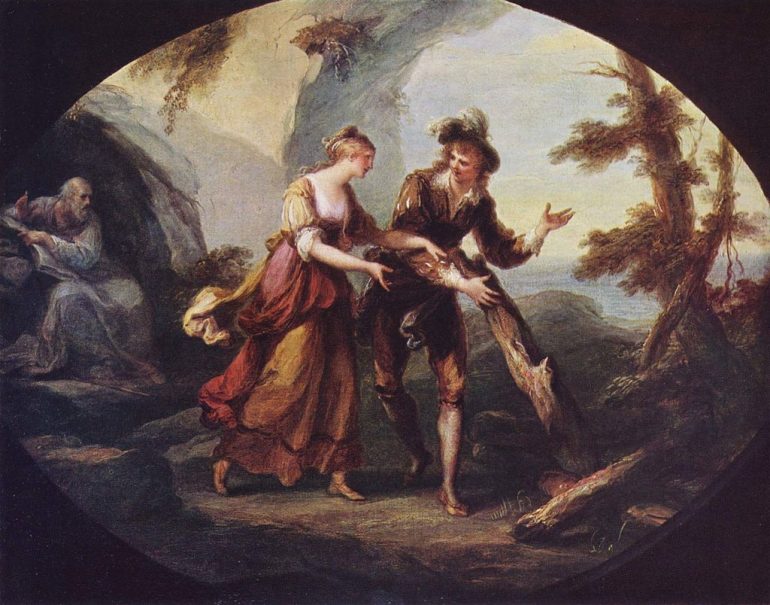 One of the three most relevant female artists in the 18th century, Angelica Kauffmann stand beside her contemporaries Rosalba Carriera and Elisabeth Vigee-Lebrun. Born on 1741, in Chur, Switzerland, she lived in London and Rome for most of her years. She learned English, French, German and Italian as a little girl and was deemed to be an artistic child prodigy. She first started her studied in drawing and oil painting via her father, Johann Joseph Kauffmann. By 12, she’s a talented musician, singer, and painter and was conflicted between pursuing a career in painting or a career in music. Her earlier works were inspired by French Rococo painters like François Boucher and Henri Gravelot. By the time she was a teenager she was already accepting commissioned works.

She traveled to Italy in 1760 to study the works of other Old Masters and studied Renaissance art and architecture while working as her father’s assistant. While there, she also worked as a portrait painter. It was here that she was influenced alot by the Neoclassicism style: her mentor in Rome in 1762 was Johann Joachim Winckelmann, a German academic and archeologist who is also a very important figure in the neoclassical art movement. She was also exposed to the neoclassical works of Anton Raphael Mengs. She also met other important figures in art at the time, like Giovanni Battista Piranesi, Pompeo Batoni, Anton von Maron, and Gavin Hamilton. A year before leaving for London in 1766 she was elected to Rome’s Accademia di San Luca. 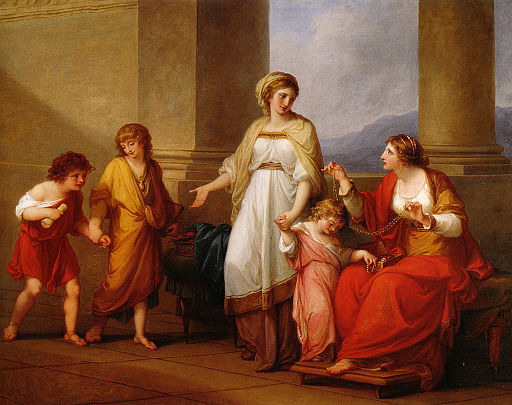 She arrived in London in 1766 while accompanying an English ambassador’s wife, Lady Wentworth. There, she immediately became popular and was favored by the royal family. She was successful as a portrait painter. Joshua Reynolds became her friend, and in 1768, she helped petitioned for the creation and became a member of London’s Royal Academy of Arts, which was founded also by Reynolds. She lived as a portrait painter in London while also doing history paintings.

The only known details about her first marriage in 1767 was that she was married to a trickster, an adventurer going by with the fake title of a Swedish count, Count de Horn. They separated one year after and on 1781, her first husband died.

She returned to Rome in 1781 and there, she married her second husband, a Venetian painter by the name Antonio Zucchi. Zucchi became her business manager and in 1782, the two moved to Case de’Stefanoni. There she worked as a tour guide to friends and other artists. They would visit Rome’s classical architectural sites and its collections of antiques, sculptures and paintings. One of her most famous visitors was Johann Wolfgang von Goethe.

Angelica Kauffmann died in 1807 in Rome. On November 7 that year a grand funeral was held in her honor. Antonio Canova was the one in charge of her funeral and a lot of people attended the said ceremony. Apart from the crowd of commoners, there were 50 priests, and 50 monks that were involved in the procession. There were girls who were wearing classical costumes like the ones in Kauffmann’s paintings. Last in line were those from the art world, including the president of the Academy of Art in Rome.

She’s remembered as both a Rococo artist and a major figure in the neoclassical school of art. Most of her paintings that involves history or mythological narratives were seen as great works in the neoclassical movement. But her real skill lies in Rococo art, especially in portraiture, and she’s mainly listed as an Old Master of this style, along with other Rococo Old Masters such as Elisabeth Vigee-Lebrun, Jean-Baptiste Greuze and Jean-Honore Fragonard.